Stream your post-Valentine blues away. 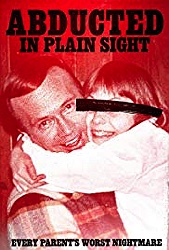 Abducted in Plain Sight (2018, dir. Skye Borgman) I saw this documentary as part of the 2018 Chicago Critics Film Festival and then heard nothing else about it until it appeared on Netflix a few weeks back. It's a crazy, heartbreaking story, and though the actual documentary isn't especially cinematic (it's mostly talking heads), the events and insane twists the truth takes are so shocking and strange that the movie is totally compelling despite itself. (Watch on Netflix) 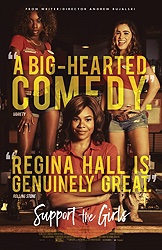 Support the Girls (2018, dir. Andrew Bujalski) The latest comedy from Andrew Bujalski showed up on my list of favorite movies of 2018. It may seem slight or lacking stakes to some, but I found it to be incredibly insightful and moving and human in the way that it looks at the lives of the staff at a Hooters-type restaurant, in particular the manager played by Regina Hall, who should be nominated for an Oscar. If only she had worn some fake teeth. (Watch on Hulu) 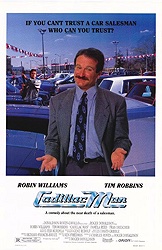 Cadillac Man (1989, dir. Roger Donaldson) Though I could never explain to you why, this is among my favorite Robin Williams vehicles (#DoYouSeeWhatIDid). It might be because he didn't make a ton of movies that I really like. This one stands out as one I enjoy in a Saturday afternoon, WGN kind of way -- which doesn't really make sense, seeing as it's R rated and better enjoyed unedited. I like Robin Williams' performance, I like Tim Robbins playing a dope, I like the fast-talking escalation of it all. (Watch free on Tubi TV) 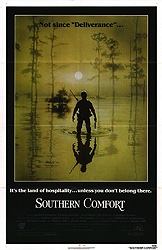 Southern Comfort (1981, dir. Walter Hill) Over the last few weeks, Erika and I have been working our way through Walter Hill's entire filmography. We haven't yet gotten to Southern Comfort because I'm trying to save a few of his best movies for the end, and this one is among my very favorites. I know Adam Riske watched it recently as part of the New Beverly Calendar and really dug it was well. What are you waiting for? This movie is incredible and features one of the best action movies casts I can think of. (Watch on Amazon Prime Video) 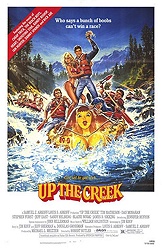 Up the Creek (1984, dir. Robert Butler) I can't defend my love of stupid '80s comedies, so I won't bother trying. This was a movie I desperately wanted to watch as a kid, I think because it stars Jennifer Runyon ("I was just about to say...8 o'clock?") and she was an early crush. Erika says I have said that about a lot of people. That may be true, but what J. Run and I had was real. As an adult, I'm way more into the stupid "snobs vs. slobs" rafting comedy of it all, because I'm highbrow AF. (Watch free with ads on Vudu)
Posted by Patrick Bromley at 5:00 AM