Heading Back to THE MISSION 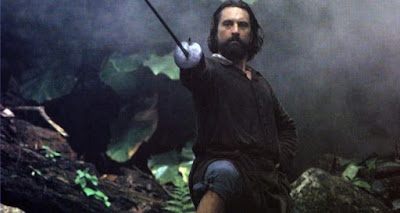 The Jesuit movie Scorsese wished he made.

The Mission sticks out as a movie that my parents pushed on me when I was way too young to understand it. They were fans of Roland Joffe’s previous movie, The Killing Fields, and were eagerly anticipating this coming out a year later. The movie stars Robert De Niro as Rodrigo Mendoza, a criminal who becomes a priest, and Jeremy Irons as Fr. Gabriel, who both work to defend the indigenous Guarani people against invading Spanish and Portuguese business interests. It was nominated for a slew of awards, including Best Picture and Best Director, and won for Best Cinematography.

The Plot in 86 Characters 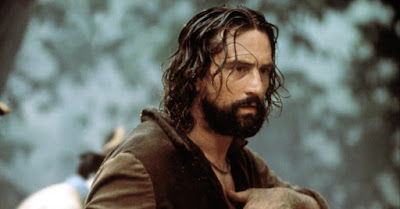 Music
Ennio Morricone’s soundtrack is probably the most memorable aspect of this experience. Morricone pits the large sound of a symphonic orchestra against a single plaintive oboe to reflect the duality and tension of European and native interests within the story. It’s worth noting that the sounds don’t always collide, but just as often blend together, suggesting that the ideal vision of the movie is for these two cultures to peacefully coexist. Early in the movie, music is the first connection between the natives and the Europeans, as Fr. Gabriel’s playing of the oboe gains the trust of the Guarani. Later on, we learn the Guarani have a great love and aptitude for music; clearly Joffe is establishing music as a common language which can bring people together.

Robert De Niro and Jeremy Irons as opposing versions of masculinity
De Niro plays the more outwardly interesting role, as the slave trader and mercenary Rodrigo Mendoza. Mendoza kills his brother in a quarrel and in his deep regret throws himself into prison, unsure whether dying of starvation or killing himself violently would be a better penance for his crime. Fr. Gabriel, played by Irons, coaxes him out of his self-imposed doom and talks him into serving the Guarani at their remote jungle mission, figuring that if Mendoza views pain as a way to pay for his crime, then he can do it by working out there. 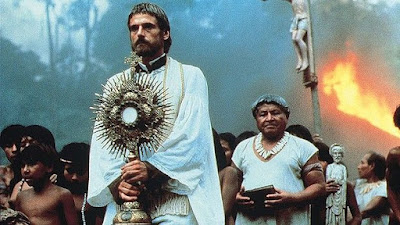 Irons is quite perfect for playing a religious man; he plays Fr. Gabriel with an intense and saintly asceticism. Where Mendoza is proud, emotional, and impulsive, Fr. Gabriel is calm, reasonable, and compassionate. Mendoza is initially a typical strong man of the world, intolerant of anyone laughing at him, and quick to fight back at the smallest offense. Even his display of deep remorse for his brother is a strongly emotional one, a response typical of a man overly ruled by his passions. Fr. Gabriel introduces Mendoza to a simpler a way of life, a peaceful life with the Guarani and the Jesuits, whose communion with each other and with the divine saps the toxins out of Mendoza’s soul. Fr. Gabriel demonstrates a different kind of strength, a different kind of manhood, to Mendoza; one that is predicated on sacrifice and service, presiding over his fellow brother Jesuits and natives with the gentle authority derived from his faith.

Predictably, depictions of colonialism have not aged well. Do the Guarani benefit from their relationship to the Jesuits? The answer seems like a mixed bag; they get protection from slave traders and the harshness of the jungle, but in exchange for their labor at the missions and an imposed Christian lifestyle based on European dictates. The Guarani (played by actual Guarani people in the movie) are depicted in a simple way, appreciative of the wonders of modern technology and instantly respectful of their white saviors. I want to give the movie the benefit of the doubt, since it seems to harbor no ill will toward the natives, but the depiction of Fr. Gabriel amazing the natives with his oboe playing feels a little too close to the noble savage trope, innocents who are unstained by civilization but whose savagery is tamed by music. Ultimately, the “white saviors” are unable to save the Guarani from the Spanish and Portuguese, who only want to enslave them and use their land for profit. 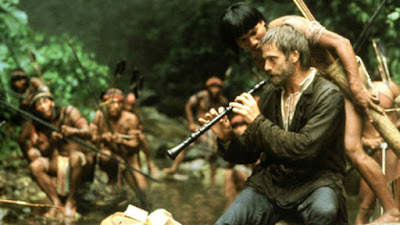 In a movie where white Europeans are invading and harming an indigenous population, it’s very easy to look for the dividing lines between people, and there are dualities everywhere: Fr. Gabriel and Mendoza, Fr. Gabriel and the Cardinal who comes to adjudicate, the Cardinal and the Spanish/Portuguese, the Spanish/Portuguese and the Guarani. However, particularly in the first half of the movie, there are numerous indicators of unity and cohesion: Mendoza makes peace with his inner demons through faith, the Cardinal is pleasantly surprised by the work of the mission, the Jesuits and the Guarani work together in a communal paradise. It’s a beautiful stretch when no one particular worldview is taking precedence over another. Inevitably, the Spanish and Portuguese forces march toward the mission, and everyone save a handful of Guarani children are slaughtered. Mendoza, thinking of his former way of life, wishes to take arms and fight back; Fr. Gabriel urges him to stick to his promises and help the people as a priest. This is the heart of the film; do we take up arms and fight oppression directly? Or do we have faith in the strength of our principles? It’s an impossible choice, and though the movie doesn’t comment on the correctness of either choice, it’s a point that resonates deeply even today.