One for the blue pill and a steak, please.

The Matrix is one of those great franchises that brings out my inner nerd. It didn’t start out that way. I had a run in high school and college where I didn’t get certain movies right away that would later become classics (The Lord of the Rings: The Fellowship of the Ring is another example where I missed the boat initially). The first time I saw The Matrix was a couple of weeks after its release, and I wasn’t prepared for it. I was expecting it to be basically what Swordfish wound up being: a glossy, tech-centric, star-posturing action movie. There’s nothing wrong with that; I like those kinds of movies (well, maybe not Swordfish). Thirty minutes into The Matrix, I was lost and frustrated. My friends loved it, but it took me a second viewing to fully get it. Once I did, there was no turning back. It became one of my favorite franchises and glued to my nostalgia for most things 1999 to 2003.

Writing a 20-year retrospective on the film is an intimidating task. The Matrix is an institution to sci-fi and blockbuster cinema, so I’m bound to leave a lot out no matter where I focus. Where do I even start with a movie this influential? What I came up with is to make a list of my most immediate thoughts after viewing it again recently. The list is 20 observations I have about the movie (and franchise) that range from silly random musings to earnest considerations of the film’s philosophies. I hope I’m doing it justice. Mostly I just want to start a conversation with you all about it. But first, here’s my list (in no specific order): 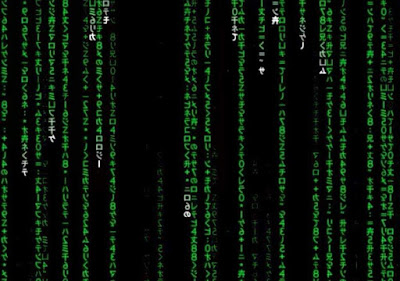 1. Don’t you just love the Matrix code? It’s very aesthetically pleasing. I could bathe in that font. It feels like you’re inside a bottle of Sprite.

2. At a recent screening I attended with some of the F This Movie! crew (Patrick hosted!), I was chatting with Jan after the movie about how much I appreciate the color scheme employed by the Wachowskis. I’m not a fan of dystopia cinema overall, but the color scheme in The Matrix (lots of blue and green) feels less draining to me than the grays chosen for films like Children of Men and The Road.

3. I watched The Animatrix for the first time recently (it’s really good) and that enhanced The Matrix even more on this revisit. Whereas I’m usually following the film through Neo’s point of view, now I’m looking at things more holistically and cognizant of the motivations of Trinity, Morpheus, and the rest of the Nebuchadnezzar crew. I emotionally understand their stakes more having gotten added context from segments like “The Second Renaissance Part I and II” in The Animatrix.

4. I love the Cypher character (played by Joe Pantoliano) because it addresses what’s on everyone’s mind while watching The Matrix: “the real world” sucks and looks worse than The Matrix. It’s a life of having a job, shitty food and no freedom other than that of being no longer harvested for energy by the machines. It’s trading one kind of control for another. Even though Cypher is a villain, he’s the most human character in the movie. He could be any of us a few years after taking the red pill.

6. Carrie-Anne Moss was such a discovery. The Wachowskis and Moss find a great balance for Trinity as a character who’s a professional at what she does but also has her own motivation, agency, and emotion. She’s not just an extension of Morpheus. The physicality to her performance is incredible, too. That’s one thing I think is overlooked about The Matrix: how strong the performances are when you consider everything else these actors are doing outside of just line readings. I’m bummed that Moss didn’t come on the scene in the ‘80s or early ‘90s. I feel like she would have had a great run during that period when action cinema was in a better state than it was in the early 2000s. 7. I adore the creativity of the world the Wachowskis built with this franchise. It’s a “How does someone even think this up?” level of storytelling. It’s a testament to everyone’s work that it comes through with such clarity and style.

8. Agent Smith (Hugo Weaving) is a fantastic villain. I love just listening to his cadence and speech inflection. I think he’s fascinating in the first Matrix (not as much in the sequels) being that he’s a construct becoming self-aware and outgrowing the program the machines have created for him to exist in. He’s the Patient Zero for what would be the next apocalypse between the machines and the advanced A.I. they created and why the machines need Neo to be their anti-virus in the sequels. 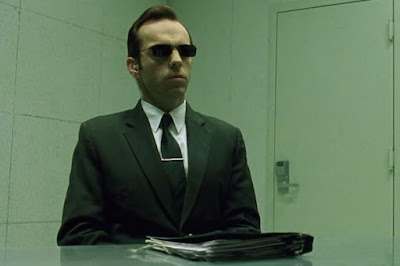 9. The score by Don Davis is perfect for this movie. It’s a great hybrid of techno, industrial, and sweeping orchestral all at once.

10. I like that Zion is never shown in The Matrix. Personally, I’d be much more willing to fight for the idea of Zion than the actual Zion we see in the sequels. It’s a smart move by the Wachowskis to not show their cards just yet.

11. This might make sense only in my head. I like that the visual effects are grounded first and then become fantastic. That usually works better for me than when I’m presented with an entirely manufactured world and have to buy in.

12. I appreciate the movie’s sincerity. Most of the winks at the audience are borne out of the characters being worn down by what their lives have become. It seldom feels like anyone is going for the joke.

13. The Matrix is a movie that celebrates the specialness of Keanu Reeves as an actor and movie star. He’s perfect for the role of Neo and I love that the Wachowskis ignore what his critics characterize as his limitations and amp up what makes him a unique screen presence. 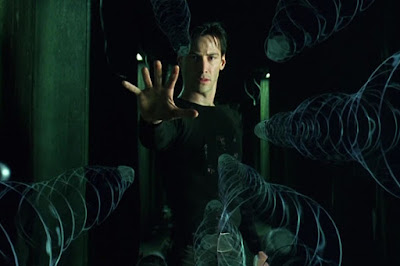 14. I really relate (I’m sure I’m not the only person) with “What is my purpose?” theme present in the film. I think that’s why The Matrix is such a universal story. Who hasn’t felt that existential fatigue before at some point in their life?

15. This was the first DVD I ever bought. I bought it on DVD before I even had a DVD player because I knew I wanted to watch it first when I had one. Those were some good times. I was a senior in high school and “Hey, do you want to come over and see my DVD player?” was an entirely valid pick-up line. It worked twice! Quick digression: one of those times I had my girlfriend over and we were kissing while The Matrix was playing. I turned her, so I could see the movie while we were making out. I was that impressed by DVD as a format. In hindsight, I’m pretty sure I wanted to make out with this movie as much as my ex. If that isn’t a Matrix-level statement on humans and technology, I don’t know what is.

16. The soundtrack to The Matrix kicks all kinds of ass. I really love “Rock is Dead” by Marilyn Manson, “Clubbed to Death” by Rob Dougan, “Leave You Far Behind” by Lunatic Calm, “Mindfields” by The Prodigy, “Dragula” by Rob Zombie, “Du Hast” by Rammstein, and “Wake Up” by Rage Against the Machine which I can’t hear without thinking of Neo flying away. This is a good problem to have. The soundtrack for Reloaded is maybe even better.

17. I love that the fight choreography/stunts in The Matrix was a catalyst for a second action career for Keanu Reeves. Pre-Matrix, Reeves was no stranger to action cinema, but after The Matrix series he incorporated his fight training and experience into some kick ass fight movies like the John Wick franchise and his underrated directorial effort, Man of Tai Chi.

18. Laurence Fishburne is terrific in this movie. Again, like Hugo Weaving, I love his speech pattern. It’s a joy just to listen to him and so right for his mysterious character. He’s the type of guy where you want to lean in to listen to him better. 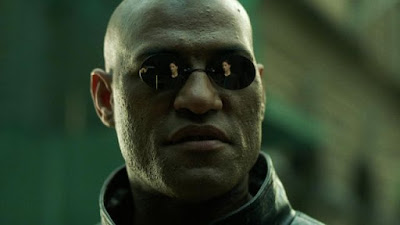 19. This is more of a statement on the Matrix series than just the original, but I’m fascinated by it as an experiment within blockbuster franchises. What if the good guys and bad guys tied at the end? What if most of the heroes died? It doesn’t really work as a satisfying narrative, but the series is possibly more interesting because it took those chances than if it stuck to a more traditional arc. Also, the dark turns of The Matrix Revolutions seem more of a piece when you factor The Animatrix into the lore.

20. Lastly, I love Neo’s character trajectory in the series from becoming The One to then being just one more The One and it’s ultimately up to him to figure out how to prevail for himself and his friends. It’s not ordained. This is also a reason I love Rey in the new Star Wars series so much. She needs to build her own legacy and win in a way that’s different then the path the Skywalker’s took. I love that theme of talent not being everything and having to maximize your potential to become great.

So, that’s my list. Now it’s your turn. What speaks to you most about The Matrix?
Posted by Patrick Bromley at 5:00 AM