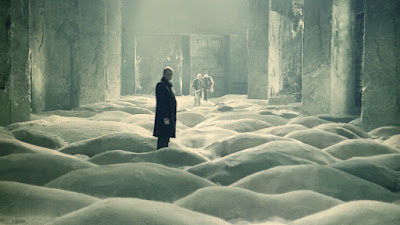 A professor and a writer hire a “stalker” to get them into a quarantined area called the Zone, to access a room that is said to grant one’s innermost desire.

The Most Junesploitation-y part about this

Stalker is perhaps an unusual choice for a monthlong celebration of exploitation films, considering Andrei Tarkovsky’s high standing in the discussion of greatest directors. However, in reading up on Alex Gardner’s Annihilation (2018), a few reviewers saw influences from Stalker and H. P. Lovecraft’s “The Colour Out of Space” (another Junesploitation-centric reference), specifically about a meteorite crash site being the source of mystery and strange power, and the plot centering around people investigating it. This “forbidden valley” concept for Stalker gained more significance years later in the real-life tragedy of the Chernobyl disaster in 1986, which has been inspired stories like The Chernobyl Diaries and HBO’s Chernobyl mini-series. So, Stalker does tap into a tradition of these types of stories, which makes it perfect for Junesploitation. 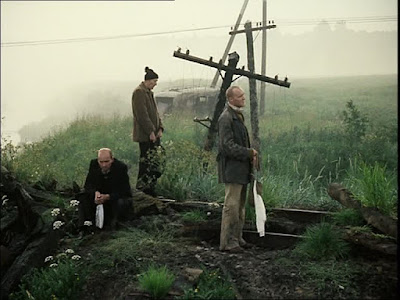 Tarkovsky’s camera work and the score stand out, although the mileage may vary for the modern viewer. I’m always reminded how much the storytelling traditions from different places can vary when I watch non-American films, and the long takes and the deliberate camera work feel like something from another planet after spending much of my life trying to catch up to the frenetic pace of more modern directors. There are 142 shots for the 163 minute run time, with a significant number of shots lasting longer than four minutes. It’s possible to maintain one’s engagement with the richness of what’s in Tarkovsky’s frame, but it’s difficult to keep that level of intense focus for over two and a half hours. Instead, the slow pace and the full frames allow for an immersiveness bordering on claustrophobia; in this way, the world of Stalker feels like a dreamscape from a distant dystopia, where the ground rules for perception are fundamentally different from ours. The claustrophobia comes from the tight closeups on the faces and the heads of the main characters, to the point where we see the hairlines, pores, and bald patches of the Stalker, the Professor, and the Writer. We feel it again in the pervasiveness of the Stalker’s labored breathing taking up such a large part of the sound. It’s there in the tight closeups on garbage submerged in pools of stagnant water and the long shots of unusual landscapes. 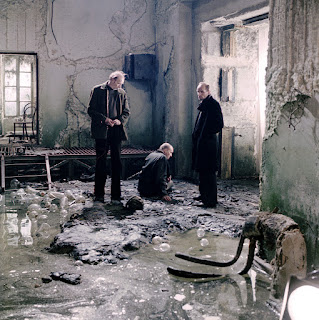 Although more of a visual story rather than a dialogue driven one, the structure of the movie is built around the interaction of the Stalker, the Professor, and the Writer, deliberately broad as archetypes. The Professor and the Writer represent the technical/scientific mind and artistic/sociological mind; they’re deliberately set up as opposing forces and their motivations for getting to the room demonstrate this. As the main characters approach the threshold of the room, the problem of manifesting one’s innermost desire becomes revealed. What if one’s innermost desire isn’t beneficial to anyone? What if one’s inner desire doesn’t match up with one’s conscious choice? What is the point of desiring anything at all? These questions are the heart of the movie, and clearly at the heart of Tarkovsky’s vision, a fable wrapped up in science fiction.

The center of the film is the Stalker character, poised between the practical rationality of the Professor and the temperamental passion of the Writer. He feels otherworldly, which matches his purpose, which is that of a guardian angel guiding his charge, or Charon ferrying the dead in Greek mythology, or Virgil guiding Dante through the underworld in the Inferno. A conventional story would follow the seekers of the quest, like the Professor or the Writer, but Tarkovsky focuses on the guide. What benefit does the Stalker receive from guiding others? If an angel guides his charge to salvation, what does he receive? What does Charon do with the coins he collects? The Writer questions the Stalker on this very point, then accuses him of enjoying watching his clients struggle. However, the Stalker’s motivation is complicated, since he doesn’t allow himself to ever enter into the room itself. His choice ultimately is about his relationship to his own innermost desire and the purpose of existence, which the Professor and the Writer have been discussing on their entire journey to the room. 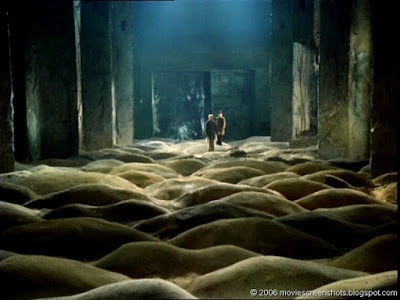 • Tarkovsky, his wife, and actor Anatoly Solonitsyn (who plays the Writer) all died of bronchial cancer, which the film’s sound editor Vladimir Sharun attributes to the toxins present in the chemical plants used as shooting locations.

• Stalker was Tarkovsky’s last filmed released in the Soviet Union, and the tension he feels about working in his native country is revealed in some of his journal entries from the time. He wrote about a recurring dream of being in jail, and one in particular where he escapes from jail yet desires to return to it immediately.

• One particular frustration Tarkovsky felt was broaching religious themes in his work, yet being constrained by the limitations of working in the Soviet Union. He envisioned that the science fiction frame of Stalker would allow discussion of religious or spiritual themes without getting arrested. 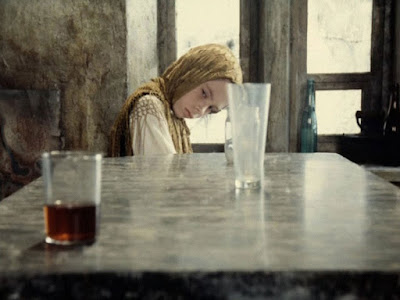 • Tarkovsky had filmed most of the outdoor scenes for about a year, but then a defect in the development process made all of that footage useless. Tarkovsky fired his initial cinematographer, hired a new one, and then re-shot all of the outdoor scenes. Ultimately, he shot over 16,000 feet of film.
Posted by Patrick Bromley at 5:00 AM