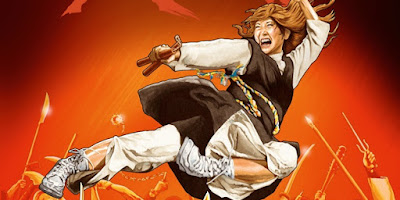 A ladykiller meets a lady killer!

The Premise in 30 Words (for 30 Days of Junesploitation)

Undercover agent gets caught by drug kingpin. His sister (Sue Shiomi) for some reason is the most qualified to rescue him from the criminal underworld. Sonny Chiba sometimes shows up.

The Most Junesploitation-y parts of this

It’s an unasked-for spinoff to an exploitation hit! How much more exploitative can this get? A lot more, actually. In the same way that Enter the Dragon was both Brucespoilation and Bondsploitation, Sister Street Fighter takes the beats of Street Fighter from earlier in the year, and just makes the lead female. 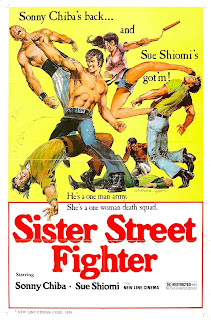 Just so we’re clear, I don’t have a problem with the elevator pitch of “Street Fighter, but a female lead.” Sue Shiomi (the studio Anglicized her name from Etsuko Shiomi) has legitimate martial arts skills and was trained in Sonny Chiba’s martial arts stunt school. Despite the potentially exploitative nature of having a female fighter, the movie doesn’t sexualize her with romantic opportunities or skimpy outfits; her character wears generic traditional martial arts clothing, and she’s fighting to save her brother, not a lover. Early in the movie, some punks come on to her at a diner, but her response is wordless and swift, showing off her kung fu skills by spearing some flies with toothpicks, tossing them into the mouth and nose of her assailants, and then beating the stuffing out of them. 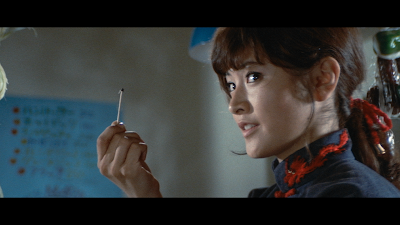 As she beats down the various elements of her enemies, the chief villain of the movie and his henchmen don’t condescend to her because of her femininity, but treat her as an actual threat to their operation. I’m not going as far to say that a low-stakes B-movie is making a grand statement about female empowerment, but I like that her character is treated with respect. What that respect looks like is that Shiomi’s character (Koryu) isn’t some dainty porcelain centerpiece. In one of the many one-on-one skirmishes in the end battle, she twists a guy’s neck so hard that she turns his head COMPLETELY AROUND COMPARED TO HIS BODY. 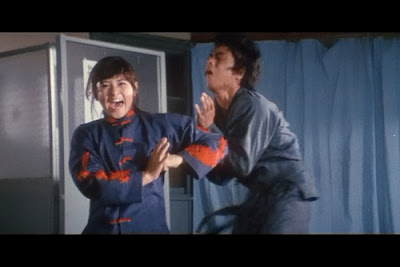 Sonny Chiba is clearly the most competent martial artist in the movie. He’s just smoother and faster than anybody else. Although he plays the namesake “Street Fighter” on which this movie is a spin-off, he’s not playing the same character; he plays an ally at the local kung fu school who helps Shiomi in her quest in opportune moments. He arguably does two of the most exploitation-y things in the movie, which are: sticking his fingers into a guy to rip his intestines out, and telling his girlfriend, who’s fighting alongside him, “I told you to stay home. Girls slow men down.”

• In another nod to their influences, the chief villain wears blades on his hand like Han from Enter the Dragon. Sadly, it’s not a blade hand; it’s blades he wears over his hand.

• Speaking of the chief villain, they don’t know what to do with him, as if they weren’t sure what his vibe was. Like a Bond villiain? What’s an evil rich guy look like? They end up making him wear sunglasses and have odd grooming habits, like having his trophy wife push back the cuticles on his toenails. Is he evil, or just a weirdo, or simply neat and hygienic? I can’t tell. 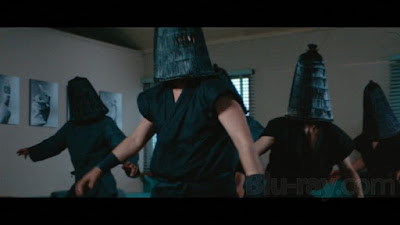 • Another weird quirk of the boss is that he’s made a collection of masters of various martial arts, including but not exclusive to karate, sai, nunchucks, blow darts, etc. There’s even a collection of female Thai boxers who are dressed in leopard print, because, you know, the jungle. By far my favorite, though, is Inubashiri and his gang, who also inexplicably wear black straw helmets, that they quickly throw off as soon as any fighting starts. What’s the point of the masks? I thought masks were about hiding one’s identity? It’s great. 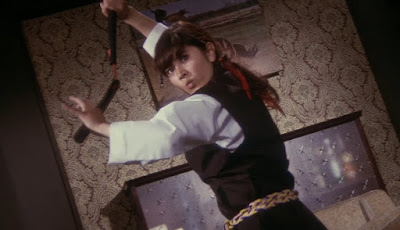 • The nunchucks guy has a pitch that is difficult to hear. Apparently, back in the '70s and '80s in the UK, visual portrayals of martial weaponry like nunchucks were illegal and cut from the VHS versions of movies. So, the 1986 UK VHS release of this movie did not have any nunchucks in it, along with the cuts that had reduced the film from an “X” to an “R” rating in the US.