“Just because I was lucky enough to get this job doesn’t mean I’m stupid enough to lose it.”

Those with even a cursory knowledge of Late Night writer/star Mindy Kaling’s career will appreciate the uphill battle her character faces in her latest film. After making her bones as an actor/director/writer/producer on The Office, Kaling found even greater recognition as the creative force behind The Mindy Project and with memoirs like Is Everyone Hanging Out Without Me? All along, Kaling has spoken out about how difficult it is for a short-statured Indian-American woman to find efficacy and respect in Hollywood’s boy’s club; the supposed meritocracy is actually a deeply incestuous circle-jerk of Harvard-educated white men bouncing from one writer’s room to another. The same jokes in the same way. No risks. No innovation. An impenetrable closed loop of adequacy and privilege. 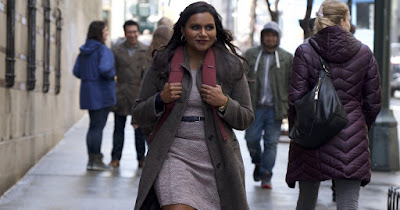 Kaling is surely channeling those frustrations in Late Night, which finds her wide-eyed Molly awarded her first writing job with the staff of Tonight with Katherine Newbury. Molly, a friendless mid-level manager from central Pennsylvania, has worshipped the trailblazing Newbury (Emma Thompson) since her late night chat show premiered almost thirty years ago. Celebrated though she may be, the dry and acerbic Newbury has grown complacent in recent years. She makes no attempt to follow trends or connect with her audience. Her producer (Denis O’Hare as Brad) is a glorified babysitter. She’s going through the motions, rarely expressing herself or spending time with her writing staff (in fact, few members of the all-male room have even met her). Enter Molly, the diversity hire determined to reignite a spark in her fallen idol.

Molly’s welcome is less than warm. Opportunistic climbers like Charlie and Tom (Hugh Dancy and Reid Scott), blind to the cultural prejudices that allowed for their success, argue that Molly’s position is unearned and illegitimate. Wallflowers like Burditt and Mancusco (Max Casella and Paul Walter Hauser), eager to tread water until retirement, are terrified that Molly’s spotlight will raise expectations for their creative output. Most of all, Newbury herself is outraged by Molly’s implication that her show is stale, that her job should require any more than the most casual engagement with the unwashed plebeians who tune in for her pithy bullshit. Molly’s genuine eagerness to work hard and self-reflect pokes a hole in the bloated, self-perpetuating, too-big-to-fail corporate hegemony that has allowed these people to rest on laurels they’ve barely even earned. 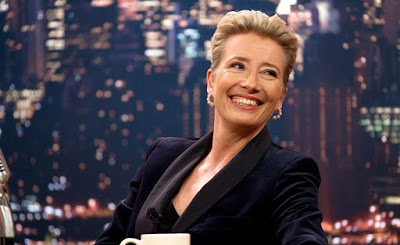 Still, Late Night isn’t interested in merely vilifying a cultural epidemic without offering solutions (Newbury scolds Molly for exactly this in an early scene). Nor is it arguing that a post-Millennial, ethnically-diverse, Instagram-obsessed writer’s room is the key to good comedy. Instead, Kaling and director Nisha Ganatra (Transparent) make a plea for authenticity, whatever the cost. When network president Caroline (Amy Ryan) tells Newbury that this season will be her last, that she’ll be handing Tonight over to fratty dude-bro comic Daniel Tennant (Ike Barinholtz), the power suit-clad iconoclast resolves to get personal, political, and to go out with a bang. Think Will McAvoy from The Newsroom. Except, you know, without the misogyny and revisionist history. While Thompson’s performance will inevitably invite comparisons to Meryl Streep in The Devil Wears Prada, Newbury’s damage is considerably more complex. Even systemic.

While mostly successful, there are times where Late Night oversteps its narrative goals in favor of messaging. A subplot involving Newbury’s affair with Charlie — a brief refuge from her husband’s (John Lithgow) Parkinson’s diagnosis — forces an examination of double-standards and slut shaming into a story that doesn’t really need it. As a result, Lithgow and Thompson share some very good scenes that feel thematically empty when considered next to the rest of the film. It’s more than understandable that Kaling would want to address these issues in this particular context — certain moments have a kind of “and while we’re at it…” ring to them — but Late Night’s few missteps tend to fall from that tree. Molly’s romantic and familial subplots are underdeveloped, as well, and feel like concessions to the very genre tropes that Late Night had been so skilled at avoiding. 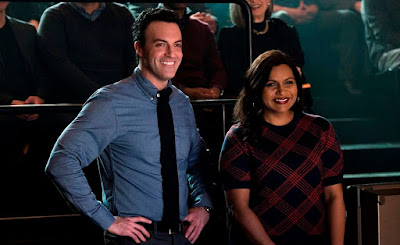 Thankfully, these hiccups are few and far between. Late Night’s reach occasionally exceeds its grasp, sure, but it’s an important referendum on a toxic system from someone who fought her way into a front row seat (or, in Molly’s case, an upside-down trash can). We can feel the authenticity of Kaling’s experience in the more cringeworthy moments, especially when her third act confrontation with territorial monologue writer Tom cuts to the root of his insecurity: “It’s hard for you, isn’t it? That we have the same job?” Patriarchal dog whistles are in no short supply for those with ears to hear them. Kaling even takes aim at other biases and bigotries — there’s a great moment with vapid YouTube sensation “Mimi Mismatch” (Annaleigh Ashford), and Newbury’s “White Savior” routine is the film’s biggest laugh — to demonstrate the complexity of the issues at hand. Late Night knows we have a lot to fix. It knows it’s hard. But the first step, it argues, is being honest with ourselves.
Posted by Patrick Bromley at 5:00 AM