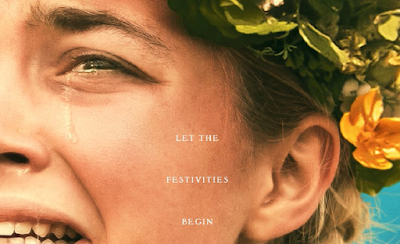 Breaking up is hard to do.

Midsommar, writer/director Ari Aster’s follow-up to Hereditary, is a pitch-black comedy that, in its own twisted way, celebrates the end of a toxic relationship and promises hope for a brighter future. It’s a film about life cycles and seasonal renewal. It will invite comparisons to folk horror classics like The Wicker Man, and that’s okay. It’s fitting. We’ll spend the summer debating whether or not it’s a worthy successor to Hereditary. That’s what we do. That’s fine. However, surface aesthetics and ranking debates aside, Midsommar is the sort of film best approached in a kind of spiritual vacuum. Befitting its running motif of mind-altering potions and herbs, it’s best to clear your mind and be open to suggestion. Midsommar asks a lot of its audience. It asks for your patience and vulnerability. It demands your attention and understanding. Ultimately, like in all relationships, it’s up to you to decide exactly how much of that you’re willing to give. 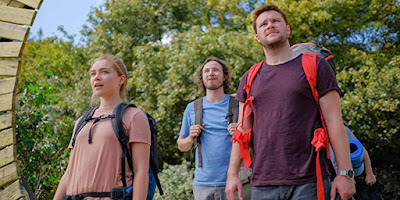 The film opens with personal tragedy as Dani’s (Florence Pugh) parents are brutally murdered. Dani, already no stranger to family trauma, turns again to boyfriend Christian (Jack Reynor) for support. Christian is tired, though. He’s young, handsome, ambitious, and not entirely sure he’s up for another four years of Dani’s neediness and drama. His friends (Will Poulter, Villhelm Blomgren, and William Jackson Harper) encourage him to finally dump Dani and join them on their upcoming summer-long European sex romp, a trip that will begin at the small Swedish commune where Pelle (Blomgren) grew up. Rather than attack his problem head on, however, Christian invites Dani to join them. It’s the kind of relationship-saving compromise in which no one wins: Christian and his friends don’t really want Dani there, and Dani is in no emotional condition to be ripped from her comfort zone by someone who will treat her as an afterthought.

And yet, here she is, on a plane to Sweden. The group soon find themselves in a remote clearing dotted with a few small buildings and a handful of white-robed Scandinavians. Their traditions seem quaint and odd at first, but Pelle and Josh (Harper) — who hopes to write his thesis on their midsummer festival — encourage them to buy the ticket and take the ride. From elders and acolytes, they learn that this small community worships the harmony of nature above all else. Agriculture and animal husbandry are sacred du-ties. Collective achievement is prioritized over individual glory. And, as Pelle explains, a human life is composed of four phases that align with the seasons: Born in spring, shaped in summer, reflecting in autumn, and ascending in winter. This last phase is strictly — even violently — enforced. The more Dani and the others learn about these traditions, the more frightening their experience becomes. 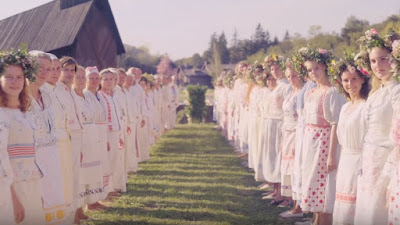 Fans of the genre may approach Midsommar expecting supernatural scares and pagan sacrifices (and, to be fair, they’ll find them), but Aster is merely using these heightened scenarios to accentuate the painful discomfort of being in a relationship that has long outlived its usefulness. Dani and Christian are together because neither of them is strong enough to walk away. Christian is a coward, often obfuscating the point of an argument or shifting blame away from himself. Dani is rudderless and beholden to Christian for the tiny crumbs of affection he’s willing to throw her way. The film’s cringiest humor is found in these all-too-familiar moments of domestic friction, while its most shocking and violent set piece presents its thesis for a reasonable solution. Why must we drag each other through the mud? Why do we let things get so bad? Why do we crawl when we could just as easily fly?

And while Midsommar doesn’t skimp on the brutality we’ve come to expect from Ari Aster (the violence is quick but unforgettable, and The Haxon Cloak’s score is sure to move some vinyl) the film’s most complex special effect is Florence Pugh. As in Hereditary, Aster counts on his lead actor to communicate through performance what no amount of expository dialogue could possibly deliver. Pugh is simply immaculate as Dani. It’s a performance rooted in quiet, exasperated pain with a shot of self-loathing. Dani tells herself that she’s putting too much pressure on Christian. She’s fucked up. She knows it, and she understands why he’s so distant. She worries he’ll abandon her. It’s not his fault he forgot her birthday, she tells herself. She should have reminded him. Like so many of us, Dani has convinced herself that her trauma defines her — that she is unworthy of comfort, security, and unconditional love. 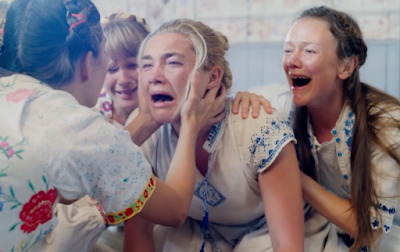 Happily, it’s through Midsommar’s savage rituals that Dani finds her voice. Audiences will be split on whether the film’s twists and turns are enough to justify its considerable length (140 minutes), but those with the fortitude to get lost in its perverted magic will barely feel the time fly by. Aster’s achievement is all the more impressive because it sidesteps the sophomore mistakes so common to artists who find his level of early acclaim: Midsommar is bigger than Hereditary. It’s more self-indulgent, to be sure. But it’s also more streamlined. Its use of mysticism and ritual is less complicated and distracting. It speaks a clear and engaging visual language. It never drags. It’s confident. Lyrical. It’s a celebration of primal feminine power in the vein of The Witch and Suspiria (2018). It’s a song for the wounded heart inside of each of us. If you’re not singing along by the final frame, then hell, I don’t want to know you.
Posted by Patrick Bromley at 12:00 PM