Ladies Behind the Lens: LITTLE

If we’re being honest with ourselves, we each have a weakness for some kind of film formula.

Maybe your formula of choice is Westerns, or slashers, or superhero movies, or talky Richard Linklater films, or movies where Keanu Reeves kicks ass while looking gorgeous. The incredibly specific movie formula that gets me every time? Body swap comedies. Give me your Big, your 13 Going On 30, your Freaky Friday of every vintage yearning to breathe free. I’ve even watched The Change-Up and The Hot Chick, against my own better judgment (not worth it).

So when I heard Tina Gordon was directing a body swap movie scripted by Girls Trip writer Tracy Oliver, I was 100% sold. Then I read that this movie, Little, came about because a then-10-year-old Marsai Martin watched Big and thought it was time for a Black, female-centric version of the story. Martin enlisted the support of her Black-ish co-star Tracee Ellis Ross and their boss Kenya Barris, and before long she was the youngest executive producer in movie history in addition to starring in the movie. Oh, and to sweeten the deal, Issa Rae and Regina Hall appear in this film as well. Yep, I’m a goner for this movie. 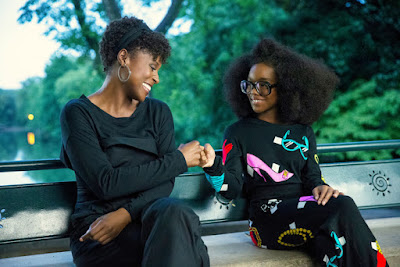 Since other people may require more before being persuaded this movie is magical, let me fill in some details for you. We meet Jordan Sanders (Marsai Martin) as a 13-year-old science nerd who gets bullied by the popular kids. One bullying incident pushes things too far, and Jordan determines that when she grows up she’s going to use her intellect to become a boss and then no one will dare to bully her. Flash forward to 38-year-old Jordan, a tech start-up executive with a glamorous penthouse, flashy sports car, designer wardrobe, and a staff that’s absolutely terrified of her. They’re scared for good reason: Jordan berates everyone from her valet to her barista, threatens her maid’s job for not putting her poufy slippers exactly 53 centimeters from her bed, throws away all carb-containing foods in the office (including donuts and cake for a birthday celebration), and demands Devil Wears Prada-level support from her personal assistant April (Rae).

April has been putting up with Jordan’s shenanigans for three years, possibly because she’s a masochist but mainly because she admires Jordan’s drive and creativity, and desperately wants to move up in the company and have the chance to pitch ideas for her own apps and games. She copes by listening to self-help audiobooks like So You Want To Slap Your Boss. The best part of her day is sneaking forbidden carbs from the donut truck parked outside. On a particularly fateful day, April stops to watch a magic trick performed by little Stevie, the daughter of the donut truck owner. Jordan, ever the enemy of fun, interrupts the scene to proclaim that “There’s no such thing as magic!” and proceeds to chastise Stevie, referring to her as a “Little chocolate Hogwart” in one of many hilariously over the top diatribes. Stevie’s not about to let this mean girl in a grown woman’s body stomp all over her dreams, and of course this leads up to the “I wish you were little” proclamation that sparks the transformation.

Do I need to tell you that Jordan wakes up in the body of her teenage self and must then call April for help? You probably already guessed that this leads to April demanding the respect she deserved all along, and that Jordan learns valuable lessons about kindness and humility. And yes, of COURSE there are multiple love/lust objects that would be perfectly acceptable for grown up Jordan to crush on but are completely inappropriate for middle school Jordan to make googly eyes at. Oh yeah, and Rachel Dratch for some reason shows up to play a Child Protective Services officer because naturally Jordan must be compelled to go back to the very school where she was humiliated the first time she was a teenager. These are all necessary beats in the body switch formula, and all of them are punctuated by moments of hilarity and awkwardness and wholesome morality lessons.

Perhaps you need still more reasons to rent this movie for $5.99 from Amazon. In that case, let’s talk about the soundtrack for a moment. It starts out with one of my all-time favorite 90s jams, “I Wish” by Skee-Lo. You know the one. I may or may not have walked out of the theater, pulled this song up on Spotify, and proceeded to blast it out my rolled down car windows at 9:45pm on a chilly April evening after watching this movie. Sorry, not sorry, suburban neighbors! You know you loved it. Besides Skee-Lo, this movie also features songs by Leikeli47, Janelle Monae, Chloe x Halle, H.E.R., Tierra Whack, and the Diva of Realness herself, Ms. Mary J. Blige. So you WILL be jamming this soundtrack for months, trust me. 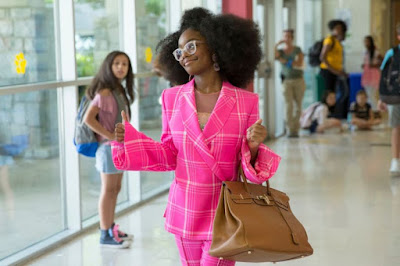 Don’t even get me started on wardrobe. Danielle Hollowell outdid herself with the costume design for all of these characters, but especially young Jordan. We’re talking pink Fendi pantsuits, Christian Dior blouses, Gucci shoes, shark pajamas designed by Olivia von Halle, and the most extra designer sweat suit you have ever seen. Is it wrong that this movie made me want to dress like a 13-year old? Oh who am I kidding, there’s no way I could pull off these looks -- but Marsai Martin totally does and she kills it with the attitude and confidence to match.

This movie’s box office more than doubled its budget of $20 million, but when I saw it, my boyfriend and I were the only ones in the theater. I was laughing, clapping my hands, stomping my feet, and talking back to the screen, but I was also wishing a lot more people were there doing the same thing. Now that it’s available for home viewing, I hope it will get the wider audience it deserves. Tina Gordon is a talented filmmaker whose previous movies (Drumline, ATL, Peeples, What Men Want) are moderate hits, but she has yet to truly become a household name. Based on this delightful movie, it’s only a matter of time before she does.

If I could swap bodies with you, my readers, I’d take the opportunity to share the joy of picking up the remote, renting Little, and laughing along all over again.
Posted by Patrick Bromley at 12:00 PM