Needless to say, I am proud of my wife and proud of her book; it’s a dilly. I was proud that I got to be the first human being (as opposed to replicant) to ever read the finished book. I remember telling Jan that I thought it was the best thing she had ever written. Last Friday, Bookends and Beginnings in Evanston hosted the book’s release party. Jan’s friend Tony Trigilio also read from his new book, Ghosts of the Upper Floor, the third volume of his Dark Shadows series*. It was a cool double feature. Jan even made cookies: bats for Dark Shadows and little unicorns for Blade Runner. If you come to one of Jan’s poetry readings, of course she’s going to feed you. 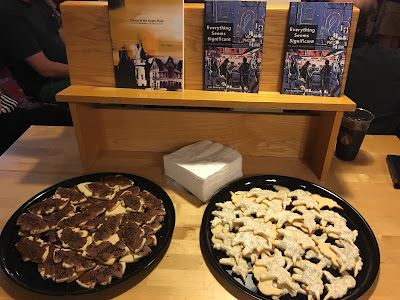 The bookshop features a white brick wall behind the reader space, so we put together some images to project while both poets read. It looked great. Afterwards we had an interesting discussion about the slides not following the reading too closely. One wants the images to add to the ambience but not be specifically illustrative. If the slides are too denotative, it draws attention away from the reader and the poem. By never actually rehearsing in advance, I ensured that the Blade Runner images accompanying Jan’s poems never ever matched anything that was actually being read. You’re welcome. 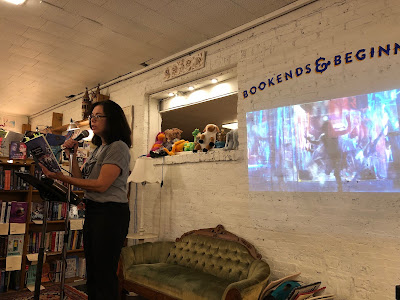 This reading was the first time I had seen others react to the new poems. One poem in particular (actually the short series of poems that discusses the controversial chapter “Kiss Me” on the Blade Runner DVD) had the audience’s attention riveted. Whenever I attend a poetry reading, I wait for this moment and think that I am particularly sensitive to it from my years of teaching: the moment when the entire audience is thinking as one. You can sense it. It has a definite sound and a definite feel. These short moments of communion between reader and audience are one of the more delightful reasons to attend live readings.

In the book’s first poem, Jan recounts its writing, the laborious process of watching, thinking, writing, re-watching, and re-thinking. She writes:

“… I pause, reverse
to the beginning, watch again
to check my memory:

And so the poem becomes the process, becomes both the signifier of the process and the final product of the process itself. Three years of watching, checking, reversing, writing, stopping, and pausing. I am proud that my wife elected to go on this journey. (Remember that Joseph Campbell assures us, in his seminal book The Power of Myth, that all of us never have anything to fear because “we only ever get the adventure that we are ready for…”) I couldn’t be more proud of Everything Seems Significant.

Are you picking up the vibe that I think you should read it too? 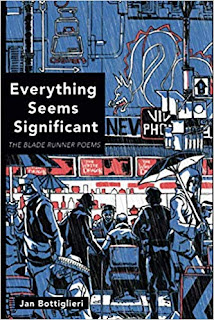 I am also proud to see what Jan once referred to as “My Project” reach fruition because it has been so long in coming. She started writing the book in August 28, 2016 and would set aside a few hours on Fridays to watch, research, and write. This seems like such an obvious point but it is one that bears repeating: to be a writer, one has to write, consistently and continuously, over a period of time. I am reminded here of the joke about the elephant ear sandwich and the restaurant being fresh out of the really big buns… Wait, wrong joke.

I am reminded here of a completely different joke, where you ask young children how to eat an elephant. The answer, of course, is one bite at a time. So I was witness to my wife’s writing, two hours here, four hours there, every Friday, one bite at a time. It is no secret that humans are creatures of habit and that with practice comes improvement. Just ask anyone who has ever played pinball or videogames, the more you play, the better you get. This strikes close to home because when I started writing for F This Movie!, I thought I was a good writer because I had taught English classes for so long. I was wrong, demonstrably so. I was an obnoxious, obvious, forced writer, nauseatingly so. Those early columns are embarrassments. But writing a thousand word essay every week? That will make you a better writer… one bite at a time.

My wife had a leg up in this whole business because she was a terrific writer to begin with, having written poetry in high school and college, having written and edited a publication for the paper industry for thirty years, having belonged to an intensive writer’s group for a decade, having earned an MFA in Poetry, and having helped edit the respected poetry journal RHINO. 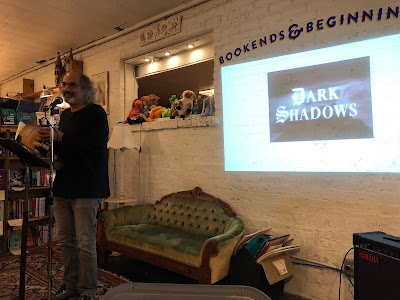 As I have written here before, the book is Jan’s deep dive into the world of Blade Runner, her favorite film. She has written one poem (sometimes a short series of poems) for each of the chapters on the Blade Runner Director’s Cut DVD. Like the film, this book does so many things at once: it comments on the film and its making, reminds us of what makes Blade Runner special, and illuminates its central themes in a way that is both personal and universal. It is as if Jan has thrown the film itself, almost everything ever written about the film, and her own autobiography into a blender and hit frappe. It’s delicious.

In the Acknowledgments section at the beginning of the book, Jan thanks our own Adam Riske and Mike Pomaro for applauding at her comment after the Elk Grove Theater Critics Classics screening of Blade Runner because that was one of the events that convinced her to write the book. She also thanks the F This Movie! family for providing her with a virtual home.

This is a home, virtual or not, that neither of us take for granted.

*Tony is making his way through the 1,225 episodes of Dark Shadows, the famous ABC supernatural soap opera, which he watched as a very young child with his mother. He is writing a poem for each episode. The third volume of the series has just been published, and he estimates that it might wind up running to ten volumes. I have purchased the complete Dark Shadows on DVD and plan on starting watching it this week, reading Tony’s books alongside it as I go. Deep dive.