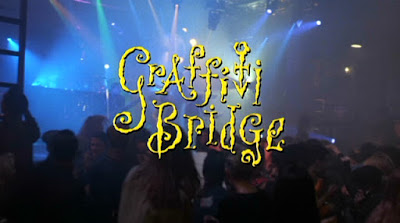 1990’s Graffiti Bridge answers the question, “What if the "Batdance" video was 90 minutes long?”

Written, directed, and produced by Prince, Graffiti Bridge was Prince’s third and final venture into movies and by far his weakest. Graffiti Bridge is the sequel to Purple Rain, where Morris (Morris Day) and The Kid (Prince) are competing owners of night clubs in the mythical town of Seven Corners. Morris wants to own all the night clubs so he is trying to win Prince’s club in an unofficial battle of the bands, and at the same time is also trying to strong-arm George Clinton into selling his club. While this is happening, a sexy angel that lives under a bridge is sent by God to get Morris and The Kid to stop arguing. At least I think that’s what she’s trying to do. This movie is so crazy that I struggle on how to explain it. The best I’ve been able to come up with is it’s like if Joel Schumacher’s Batman movies met 2003’s From Justin to Kelly. If you haven’t gathered, it’s bad. Like, it’s so bad it almost ruins Purple Rain for me (notice I said “almost”). As a huge Prince fan it pains me to say that, but it’s so terrible it makes Under the Cherry Moon look like a masterpiece. 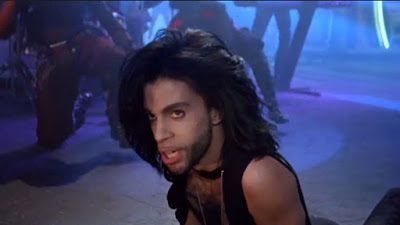 In a week where we are celebrating the movies of 1990, I’m not celebrating Graffiti Bridge because it’s good, I’m celebrating the fact that it exists at all. When watching Graffiti Bridge, it’s clear that Prince has something to say and wants to say it. I wrote during 1984 week about Purple Rain and how Prince captured lightning in a bottle with a great movie that we will probably never see the likes of again. Prince’s motivations are the same as they were with Purple Rain: he wants to plug his music and that of the other artists signed to his label. It worked once, it would stand to reason that it should be able to work again. If Prince stopped there and got the right director, or had someone edit his screenplay, I think there is a version of Graffiti Bridge that works.

The problem, though, is Prince being overconfident that he was the reason Purple Rain worked, and not the hundreds of other things that contributed to it. He’d seen plenty of music videos being made, he’d already directed one movie, so he decided to direct Graffiti Bridge. The only person who could possibly have told Prince directing was a bad idea would have been a producer, but Prince is also producing. Top to bottom, everyone involved with this movie owes Prince something, from the acting gig to the people on his label. No one involved was telling him “no.” The very unique bubble that we then get is the movie equivalent of “The Emperor’s New Clothes.” Graffiti Bridge is completely, 100%, all Prince. Every thought, every idea that is Prince in 1990 is on that screen for us to see. As a fan, that is incredibly fascinating to me. 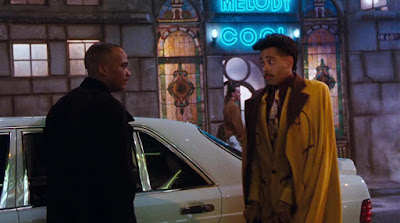 What Prince knows, the movie works at doing. The music is great, the dancing is great, the overall performances are slick music videos. Unfortunately, those things are held together by a bunch of nonsense. The settings are all stale interior sets, lit with a multitude of different colored lights made to look like a cheap version of the Batman set. The Kid is criticized by Morris because his music is too “Gospel” and won’t hit. The comedy bits are unfunny and misogynistic. These are the things Prince thought were cool; these were his ideas, the jokes he thought were funny. Prince had succeeded at that point in almost every venture had attempted in his career. He put together the best movie he knew how to do with confidence that Graffiti Bridge was going to succeed as well. Well, confidence and ideas can’t make up for Prince’s inability to make a movie. There is no barrier between Prince’s ideas and what ends up on the screen. How many movies exist like that? Not many. Graffiti Bridge becomes this odd portrait of the type of music, humor, and style of Prince. Graffiti Bridge is deservedly forgettable as a movie, but as a window into the thoughts and ideas of one of the greatest musicians that has ever lived? Well, that is something that should be celebrated.