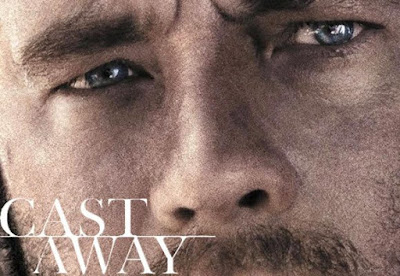 Welcome to 2K Replay, the home of the year 2000 in Film. This week I’m revisiting a movie that I prepped for the shelf when I worked at Blockbuster Video: Cast Away. 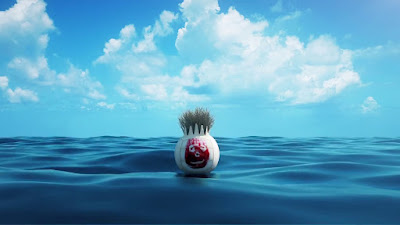 • Best Scene/Moment: There are many to choose from: 1) The plane crash sequence, 2) Chuck Noland (Tom Hanks) making fire for the first time, 3) His long vacant stare as he eats a raw fish after four years being stuck on the island, 4) Losing his friend Wilson the volleyball. My new favorite caught me by surprise on this viewing. It’s the long conversation Hanks and Helen Hunt have after he (SPOILER) returns home. There’s something so beautiful and tragic seeing two people together that know they’re speaking to each other for the last time. I’ve been in that situation before and in the moment it’s a surreal experience this movie captures beautifully.

• Best Quote About Cast Away: “He turned around. He went back and made babies with that lady.” - Tom Hanks, when asked on Inside The Actor’s Studio of what he thought happened to his Cast Away character after the film ended.

• Best Song: The film features a few Elvis Presley songs with my favorite being “Return to Sender.” The placement of it in the movie is pretty on-the-nose but I’ll forgive it.

• Best Merch Available on eBay Right Now: “Best Cast Away Film Movie Opening Day AD & Review 2000 Los Angeles CA Newspaper” for $88.00. It was originally listed for $700.00, making $88.00 a relative bargain. The seller rationalizes selling the entertainment section of a 20-year-old newspaper for nearly $100.00 by saying it’s from “the leading newspaper from the home of the entertainment industry” and that it’s “a quite rare issue as it would not have been saved since it contains no historically significant content.” 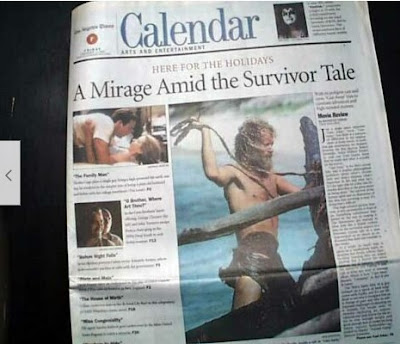 • Director Check: If we’re separating Zemeckis’ career into two parts, Cast Away was the last movie from the first half, which consisted of mostly very successful, subversive crowd-pleasers including the Back to the Future trilogy, Who Framed Roger Rabbit?, and Forrest Gump. At the time of Cast Away, Zemeckis was pretty much finishing his career ascent. After it, he went very experimental within the studio system with weird digressions into animation (The Polar Express, Beowulf, A Christmas Carol) and one high-priced box office failure after the other (except for Flight, of which I’m a fan). Zemeckis is almost in director jail at this point which is a shame, though he has had plenty of chances many other directors haven’t been afforded.

• Draft Day or Cast Away? Cast Away

Coincidentally, Green Day released a song in 2000 called “Castaway” from their album “Warning.” Here it is! Some even better songs from that album are “Waiting,” “Blood, Sex and Booze,” “Minority,” and “Jackass.”

• How Did It Rent at Blockbuster? Very well. A lot of people bought it, too, since in 2000 if you even remotely liked a movie you would buy it on DVD.

• Mall Movie? Nope. This is classy theater material full-stop. The mall might have gotten it a couple of months into its run.

• Only in 2000: FedEx flexing. Apparently, job applications for the company increased by 30% after the film’s release. I even thought at one point “That’s a good-looking truck!” 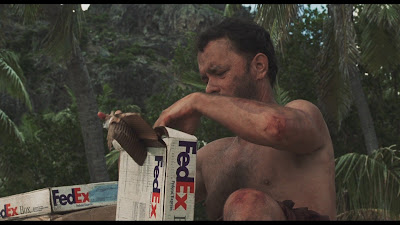 • Poster Score: 3.5 out of 5. There’s nothing particularly special about it, but I do miss the days of putting just the star’s face on a poster and it was like “Tom Hanks - you in or you out?” I’m giving the poster an additional 0.5 pts for the white margin around the image, which looks like sand on a beach. It’s a nice touch. 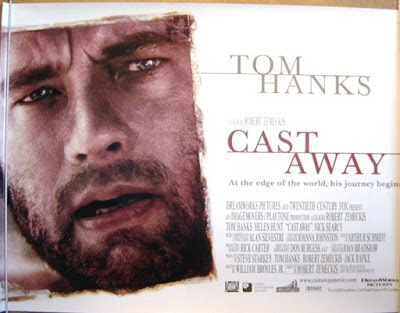 • Scene Stealer: Tom Hanks. I’d say Wilson, but Tom Hanks is bringing Wilson to life himself with his performance (along with screenwriter William Broyles Jr., who wrote Wilson its own dialogue for Hanks to play off).

• I Miss: Tom Hanks movies being big events in the film calendar. He’s still great, but he (unsurprisingly, because no one can) couldn’t maintain that Teflon touch he had throughout much of the ‘90s and into the early ‘00s.

• I Don’t Miss: Day Planners. There’s a scene early in the movie where Tom Hanks and Helen Hunt synch up their schedules using day planners and it made me remember how bad I was at using my Franklin Day Planner. It was too much pressure. I didn’t want to buy page refills each year. What if I needed to scratch stuff out and add new things in? There wasn’t enough line spacing to allow for that. Day planning is one area technology improved.

• 2020 Crush: Bettina (Lari White), the woman Hanks returns the FedEx package to at the end of the movie.

• What I Thought in 2000: I adored Cast Away. This was during the time period between 1992 and 2002 when Tom Hanks could do no wrong in my opinion. I even liked the ending, which I remember being a point of consternation for people in 2000.

• What I Think in 2020: It’s still great. Probably my favorite movie of the year 2000. What stood out to me this time was how well-directed and edited the film is. Also, this was the first time I saw the movie where I thought Chuck followed Bettina at the end (he “saw what the tide brought in”). I used to choose to read it as he was alone again but this time with limitless options (fork-in-the-road) instead of no options (the island). How do you interpret the ending?