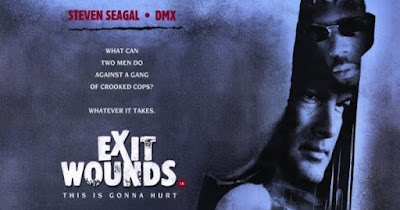 In a way, yes. 2001's Exit Wounds is the last good theatrical wide release Steven Seagal made. It doesn't have much competition, of course; only 2002's Half Past Dead got any kind of theatrical run after it, not counting Machete, which really isn't a "Steven Seagal movie" even if he does appear as the villain. There are a couple of DTV films that may give Exit Wounds a run for its money (Pistol Whipped being the best of the bunch), but even they lack the slickness and capable Hollywood professionalism afforded a Joel Silver production. This might be the last time a Steven Seagal movie felt like a real movie.

Seagal plays Orin Boyd, a Detroit cop who gets transferred to a tough part of town after he disobeys direct orders during an attempt on the visiting Vice President's life. He's sent to anger management classes (which include Tom Arnold in full-on manic mode as a member) and assigned a new partner, played by Isaiah Washington. They break up a drug buy between an undercover cop and the city's biggest dealer, Latrell Walker (rapper DMX). Both the cops and Walker are more than they first appear to be, however, leading Boyd down a rabbit hole of tech millionaires, police corruption, and daytime talk shows. 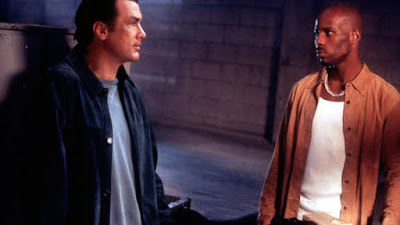 Exit Wounds is the middle part of the unofficial "hip hop action" trilogy from Polish cinematographer-turned-director Andrzej Bartkowiak, following 2000's Romeo Must Die and preceding future #HeavyAction installment Cradle to the Grave in 2003. The movies are marked by the presence of hip hop music on the soundtrack, urban settings, and DMX somewhere in the cast. Though only three of them were produced, the movies marked an exciting time to be an action fan, bringing back the heyday of the early '90s with a fresh coat of paint. They're slick as hell, establish character through action, and are built around the personalities of their stars -- Jet Li in the case of Romeo Must Die, but more realistically DMX in the case of both Cradle and Exit Wounds. Despite his presence as a co-lead, this movie doesn't feel like most other Steven Seagal movies. Sure, he's a no-nonsense cop who plays by his own set of rules (shades of early Seagal efforts like Above the Law and Out for Justice), but almost everything else about the Orin Boyd character could have been played by any other action star. It's the rare case of Seagal being forced to fit into an existing formula rather than having a star vehicle built up around him.

Because of this, Exit Wounds is a more effective buddy movie than future #HeavyAction entry The Gilmmer Man, Seagal's only previous attempt at sharing the spotlight in an action movie. It's not that The Glimmer Man is bad -- I dig it -- but you can feel Seagal's unwillingness to play nice with others for the entirety of its running time. That's a movie designed to build the star's legend, rife with mysterious, mystical bullshit. Exit Wounds brings Seagal back to basics for the first time in a long time, shedding all his mythology and recreating him in the image of the classic Action Movie Cop. Even more incredibly, Seagal allows for some humor at his own expense, whether it's being too big for a school desk or getting busted down to traffic cop while "I Feel Good" plays. Listen, I'm not saying any of it is actually funny, but the very fact that Seagal is willing to be the butt of a joke -- something he wouldn't even allow when he hosted Saturday Night Live in the early '90s -- is proof that he's taking some risks here. 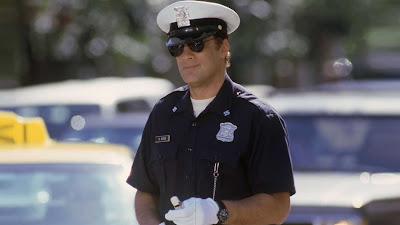 While I wouldn't describe Seagal's chemistry with DMX as being particularly strong, it doesn't need to be; the screenplay (by Ed Horowitz and Richard D'Ovidio, based on a book of the same name by John Westermann) cleverly keeps them on separate tracks for most of the movie, only pairing them up for a handful of scenes. DMX acquits himself well in one of his first lead roles, too. He's not a great actor, but he has a strong screen presence and seems capable when it comes to the physical action stuff. Like Ice-T in some of his early performances, X has a charisma and an authenticity that's difficult to fake. It's unfortunate that Bartkowiak leans on him so hard for moments that feel like posturing -- a late-film beat in which water is raining down on him and he puts his face up to it like he's Andy Fucking DeFresne comes to mind -- but that also seems like part and parcel of the action movie package. Very often, it's about looking cool. At least DMX looks cool well. 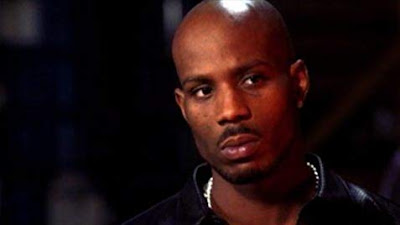 I haven't even touched upon the supporting cast, which includes Anthony Anderson straining just as hard for laughs as Tom Arnold (the entirety of the end credits is given over to their unfunny riffing), Jill Hennessy as Seagal's captain, Bruce McGill and Bill Duke as more Detroit P.D. brass, and the great Michael Jai White as the film's big bad. That ensemble, combined with Bartkowiak's polished direction, helps bolster the performances of Seagal and DMX -- a rising tide and all that. Like I said, it feels like a real movie in a way that almost no subsequent Seagal vehicle would. It would have been interesting to see his theatrical output continue from here had that actually happened, because Exit Wounds feels like a turning point in his career. He's humbled a bit, more willing to play ball. Instead, he retreated to the safety of the DTV world, where his name would still move units in foreign markets regardless of whether or not the movie was any good. Too often, it wasn't. Exit Wounds shows us a Seagal that Could Have Been. It's a better movie for it.