The review duo who are moving buddies.

Adam: We kick off our series revisiting the films of Pixar with their first feature film - Toy Story, starring Tom Hanks as Woody and Tim Allen as Buzz Lightyear. Do I need to summarize the plot? Everyone has seen Toy Story, right? Instead I’ll start by saying how big of a deal this movie was to me when it was released on Thanksgiving weekend 1995. I saw the trailer before Pocahontas the previous summer and was pretty blown away by the new style of animation. I couldn’t wait for the movie to come out, although I thought the film starred Tom Hanks as Woody and George Clooney as Buzz. When I later learned it was Tim Allen, I agreed that made more sense. This was one of those in-betweener movies for me back around this time, where I was starting to get “too old” for a movie like Toy Story (I was 13) but defiantly holding onto kids’ entertainment and in no rush to “be a teenager.” In hindsight, I realize it was stupid and that I shouldn’t have cared, but I did get a lot of grief from peers my age for wanting to see the likes of Babe, First Kid, D3: The Mighty Ducks, etc. in my early teenage years. I just figured it was having a balanced diet of movies -- I saw both Toy Story and Casino that opening weekend, so don’t question my bonafides. Also, what a great weekend that was with those two movies opening the same day!

Rob: I was! I’m slightly younger (I was nine when Toy Story came out), so this was right in my wheelhouse. It’s one of the rare movies from my childhood I remember seeing in theaters, and multiple subsequent viewings have lodged it permanently in my brain. I actually rewatched this one with family recently (before we knew we’d do this column), and it was one of those experiences where sense memory opens up part of your brain that you haven’t used in ages. I realized that I remember each and every little sound effect, every line of dialogue, and even the very moment when I realized Buzz Lightyear was the guy from Home Improvement (I don’t think I’d seen The Santa Clause yet, and Jungle 2 Jungle wouldn’t come out until 1997). 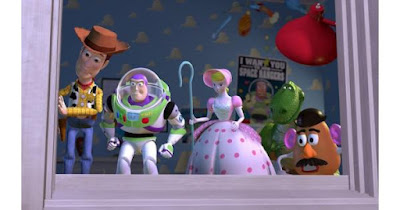 Adam: Rewatching it for this column brought back a similar sense-memory. It’s difficult for me to engage the movie with any sort of discovery, because I know it backwards and forwards, but that’s more a testament to how much it’s become part of my movie life over the years. It’s the “Happy Birthday” song of movies. I value it mostly these days because it’s something I’ve shared with young members of my family and they really enjoy it. It warms my heart to see them into anything; it’s just cool that it’s something I know about like Toy Story.

Rob: There are limitless film history resources where readers can get a sense of just how big a deal Pixar and 3D computer animation were at the time, so I’m not sure how much we should get into that right now (Though it’ll probably come up over the course of this series). What really matters to me is how well the story holds up. Woody and Buzz have been part of our culture for so long that I forgot what a selfish jag Woody is for the first (and, to be fair, most of the second) act, and I was impressed again by how well the film stages scenes like the Army men reconnaissance mission and the Pizza Planet infiltration. I was also impressed that none of the “secret jokes for adults being forced to watch this with their kids” were crass or trying to sneakily get something in under the radar. It’s all stuff like the Don Rickles hockey puck gag, which works as a joke in the context of the movie as well as a reference to something else. That’s harder than we give it credit for.

Are there any small moments that stand out in particular for you, and do you have a favorite member of the supporting cast?

Adam: I still get excited when Pizza Planet is mentioned. Then I think to myself, “The filmmakers have built it up, they better stick the landing” and they do because P.P. looks awesome even to this day. The stretches that always work for me are Pizza Planet, Buzz flying around Andy’s bedroom as a flex, and the climax of the movie where Woody and Buzz race on the remote-control car to get back to the moving truck. It’s tough to pick out a favorite member of the supporting cast, but I’d probably say Slinky because he’s voiced by Jim Varney (who I miss) and he says “golly bob howdy” which I’ve said several times out loud and daily in my brain since 1995.

The premise of this movie is ingenious. It’s so under-the-nose brilliant that it’s hard to fathom it not being thought of before, especially with all the ‘80s media there was derived from toys. As you said earlier, too, it’s hard to separate Toy Story the movie from it as a pop culture touchpoint. The original film is so good that it’s easy for me (even right now) to take for granted. If this didn’t work, there may not have been any other Pixar feature films. It also changed animation mostly for the worse imho, but that is an unfair indictment of the movie directly. It would be like blaming Jaws for creating the blockbuster and ruining auteur ‘70s cinema.

Random question: did you have a favorite toy growing up that you treated like it were real? I had a baby blanket named Bluey who was my rock throughout childhood. When I was in pre-school, I shoved it into my backpack and when life got crazy I would walk over to my bag, stick my face in there and be like “I don’t know how we’re gonna get through this sh*t, dude.” My family still jokes with me about Bluey. They’ll say, “How’s Bluey doing?” and I’ll say “He’s worried about his 401K.”

Rob: Bluey’s thinking of going back to school, but he’s worried about taking on more debt in this economy. That’s amazing, though. I can’t think of one childhood toy in particular, but I do remember recreating my favorite Star Wars scenes with action figures on my shelf. While normal kids were taking them down and playing with them, my figures were pristinely positioned as cinematically as possible and never touched. I particularly remember little Return of the Jedi Luke Skywalker’s outstretched arms as he fended off Force lightning from Emperor Palpatine. I was a broken child. I needed a Bluey.

Adam: It’s why I’m happy Blu-ray won as a format. 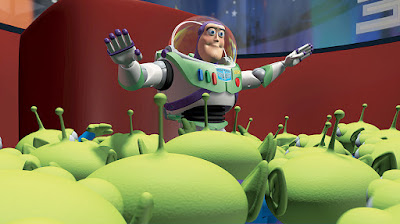 Rob: I want to go back to what you said about Toy Story’s ingenuity and pose a question: Why don’t I get preoccupied with logistical questions about the Toy Story toys’ interior lives the way I do about the cars in the Cars universe (I have serious, crucial questions about the Cars universe)? I don’t seem to care if the toys are born, die, have sex, eat, or go to the bathroom. Do they go to school? I don’t know! Who cares? Even just the idea that the toys go stiff and inanimate when humans are around is fascinating without being distracting. It makes sense because they live to serve and be loved by their owners, and their struggle with that need is the overarching theme of the whole series. There’s no real answer to this question, but it’s just something that continues to impress me about this movie. It’s this beautiful slice-of-life concept that comes with a pre-built universe that doesn’t need that kind of exposition. We all have toys. We all understand toys. What if the toys were alive? What would they want to do?

Adam: I think there needs to be a branch to make a concept like this go down easier. We’ve all imagined toys coming to life at some point. Cars, on the other hand, not as much. I remember walking out of Cars and being put-off by real cars in the parking lot. Like...I didn’t want them to have faces.

Do you like the music in Toy Story? I love the score, but I wish it was anyone but Randy Newman singing. He makes everything sound so...basic.

Rob: It’s hard for me to judge Newman objectively because I associate his voice so intimately with this movie. I also roll my eyes when I hear his music in other movies, but I can’t say that Toy Story would be the same without “You’ve Got a Friend in Me.” I mean, just his voice alone evokes feelings of friendship and, I don’t know, avuncular wisdom. That said, the film’s score would be excellent, either way. It’s a warm blanket.

Seriously, though. Do people sit in the cars? Do they have steering wheels? Are the cars born? Built? Who builds them? Why are there still human-sized buildings? Why can’t

You know what? I can’t handle this yet. Another day. 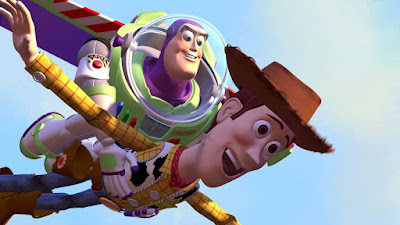 Anyway, can we talk about Sid for a second? The idea of mistreated toys comes up a lot later on in Toy Story 3, but I remember being legitimately horrified by those cannibalized monstrosities in his bedroom. They can’t talk! Can they think? It’s like a miniature plastic Human Centipede universe! On this viewing, though, I was comforted by the way Woody and Buzz learn to respect them and eventually stand up for them.

Adam: It’s hard for me to watch the Sid scenes because this kid will probably be awful to his pets, family, significant others, etc. in the future. It feels too real to me. I hope he reforms after Woody and the abused toys reveal themselves. I can totally see him as one of those people who uses personalized home technology and verbally abuses it. I’m thinking too much about this, aren’t I?

What’s up for next week?

Rob: Our All Pacino series will return with William Friedkin’s controversial 1980 film, Cruising. That’ll keep everyone cheery during this global pandemic, right? Until next time…