Glutton for Punishment: VILLAGE OF THE DAMNED

What makes this the perfect pick for Junesploitation’s “Kids”day?
Why, the eyes that terrorize, of course.

Village of the Damned is a damned interesting horror/science fiction film from 1960. It made a tidy profit when first released, garnered solid reviews, and spawned a sequel and a forgettable 1995 remake. The film originally went out in two different versions: the American version features risible glowing animation around the alien children’s eyes whenever they do a naughty thing. The English version eschews this nonsense, making it a better film. I remember reading an article in which the American producer who dreamed up that glowing eyes gimmick gave that effect all the credit for the film’s success in America, which makes no sense because the film was also a success in England.

I wish there was a way to screen the English variant, but as far as I know, the “non-glowing” Village of the Damned no longer exists. You cannot see it. That figures. 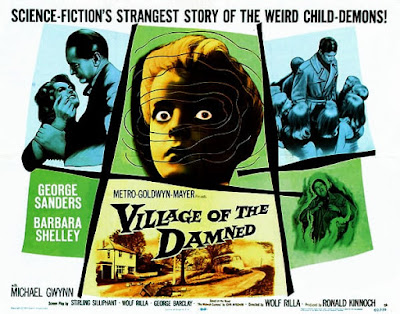 I think a “non-glowing” Village of the Damned would resemble a superior 90-minute Twilight Zone episode, which is high praise indeed.

The Plot in Brief: Everyone in Midwich, England passes out one day, and two months later every woman of suitable age gives birth to a strange, blonde-haired baby. These children grow to look like each other and prefer their own company to others in the village, including their parents. They learn quickly and benefit from a hive mind; once one of them learns something, they all know it. Villagers begin to die mysteriously.

Professor Gordon Zellaby (George Sanders) is the unhappy father of one of these children, David (Martin Stephens), who seems to be the leader. Whenever the children feel threatened, they can control the mind of the aggressor and cause deadly mischief. They force one bullying local to crash his car into a wall and then force his loudmouth brother to commit suicide. Understandably, the villagers find this terrifying.

Zellaby decides to teach the strange children; they are segregated in an old school building by themselves. The children like Zellaby quite a bit. We learn that other countries around the world also host these strange alien cohorts. Once Zellaby figures out the scope of the threat, he must make a difficult decision: continue teaching the children or destroy them? 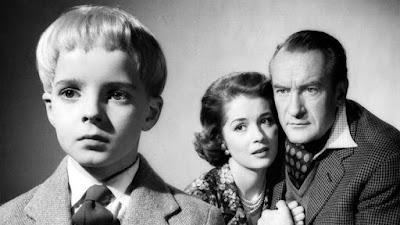 I think one aspect of Village of the Damned that draws me to it is the theme of a teacher and his students. In the film, Gordon Zellaby is tasked with teaching these unnerving kids and gives it the good old college try. The fact that these particular children can read his mind makes teaching them more difficult. This reminds me of my own teaching career and brings up matters familiar to all teachers. Can the students really read your mind? If they profess to like you, are they only claiming that to further their own selfish ends? In any teaching scenario, should you teach the pupils placed in your charge or destroy them? Watching this film is like being back in front of the old blackboard for me! Educate them… or murder them? Which one of these?

William Paul’s incredible book Laughing/Screaming outlines an entire subgenre of horror films that seem to endorse child abuse. Films like The Bad Seed, Village of the Damned, The Omen, and The Exorcist all present narrative elements that lead to an audience desperate to see a child punished: the child is equated with absolute malignancy, the child represents a disturbing mix of precociousness and regression, the age of the child is generally prepubescent, and one or more of the actual parents is absent. This is a fascinating chapter in a fascinating book. Village of the Damned fits Paul’s subgenre to a “T.” Because hurting or killing a child represents killing off a part of the parent, notice how many of these films feature a parent or parent figure sacrificing themselves in the act of disciplining the child. (“Correcting them,” as Delbert Grady puts it in The Shining.) Yet another vicarious thrill that Village of the Damned offers its audience is satisfying a desire to see a “willful” child spanked… or worse. 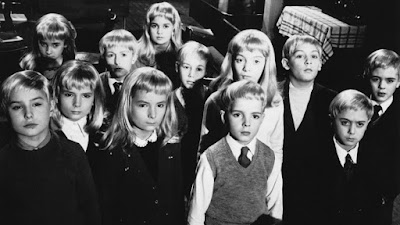 Personally, I don’t believe in hitting children. I think when you hit children, you are only teaching them that if they are bigger than someone else, they can use physical force to get their way. That’s a shitty lesson that helps no one. Of course, it’s easy for me to advocate this position, since all of the children I know are human children and not alien murder tots.

Email ThisBlogThis!Share to TwitterShare to FacebookShare to Pinterest
Labels: 1960s movies, glutton for punishment, killer kids, village of the damned