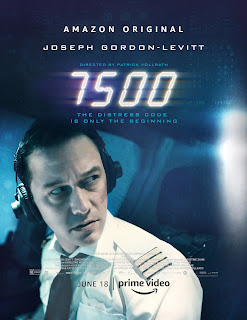 “Well, tell your disappointment to suck it. I’m doing a bottle episode!”

There is a basic cinematic language to most skybound thrillers: Glory shots of the aircraft in flight emphasize its grandeur and power. Close-ups scanning over the faces of the flight crew and air traffic controllers convey the split-second thinking and engineering expertise required by their work. We see the passengers fend for their lives through shaky handheld angles that tip and roll as the airplane careens toward certain doom. Dramatic music swells as the brave pilots (or passengers, or US presidents) make their heroic stand against whatever force opposes them. All the while, we feel the claustrophobia of the cabin and the existential terror of hurtling thousands of feet through the open sky. No matter the dramatic device — engine failure, terrorism, disgruntled felons looking for non-extradition countries — these kinds of thrillers build on our shared air travel experiences and remind us just how close we are to total catastrophe.

7500, however, speaks an entirely different language. Writer/director Patrick Vollrath anchors his camera in the cockpit as commercial airline pilots Tobias Ellis (Joseph Gordon-Levitt) and Michael Lutzmann (Carlo Kitzlinger) prepare for takeoff from Berlin. It’s an evening flight, and the film’s opening movement takes its time lulling us into comfort through the haze of control panel lights, the dull roar of engine warm-up, and the clockwork routine of radio chatter and flipping switches. We get only brief glimpses of the cabin as passengers and flight attendants (including Aylin Tezel as Ellis’ girlfriend, Gökce) shuffle around as normal. Pre-flight reports are filed. Courses are set in. Pilot and co-pilot chat about the weather. Late passengers are chastised for their unspeakable infraction of our social contract. But we’re always with Ellis, upright in the pilot’s seat and held at a remove from all the hubbub. A sturdy door shuts in the cockpit, and we’re off to Paris.

And then, without warning — and notably without dramatic ramp-ups in score or editing — a group of hijackers slam their way through the cabin and toward the cockpit door. We’re mid-air, mid-conversation, and Ellis has only a few seconds to push the door closed and help Lutzmann beat back the lone terrorist (Murathan Muslu as Kinan) who has made it inside. Soon, Ellis is alone at the helm, frantically negotiating with air traffic control and watching through cabin monitors as the hijackers use makeshift knives to corral the passengers. Most thrillers would scale up, at this point, introducing a courageous passenger or an engineer on the ground who knows how to regain control of the aircraft. Hell, most thrillers would at least show us the outside of the plane. But 7500 isn’t the kind of bombastic ensemble piece built to reassure us that the system works, that we’re safe in the hands of professionals who built fail-safes into every operation and have a plan for every eventuality. We’re locked in a room with Ellis, and frankly, he’s fucked.

7500 is also the kind of story that is going to mess with your movie clock in a big way. With only a few dramatic plates spinning at any one time, each obstacle Ellis overcomes feels like it should be the last. The lead terrorists (Paul Wollin as Daniel and Omid Memar as Vedat) have only so much leverage once Ellis loses his incentive to open the cockpit door. Air traffic control has prepared an emergency landing plan and even scrambled German Air Force jets to accompany the plane to safety. Ellis knows the stakes of his mission and sticks to his guns, even inciting an insurrection by the faceless passengers. But that confidence is false. That stillness could (and will) explode into chaos at any second. Trapped within the unchanging cockpit walls, we can barely tell the difference between danger and safety or between the air and the ground. Again, 7500 is not a death-defying assault on our senses. It’s at its best when it scales down, eventually becoming a quiet reckoning between an eighteen year-old terrorist (Vedat) and his inescapable fate.

In the end, your appreciation of 7500 is going to depend on what kind of thriller you’re in the mood for. If you’re looking for the Non-Stops, Air Force Ones, or United 93s of the world, this one probably isn’t for you. Though Ellis demonstrates extraordinary valor and an almost inhuman degree of self-control, he’s doing little more than his job. He’s a hero, but he’s also a person trying to cope with his situation. 7500 urges us to empathize with him rather than to try to outsmart the terrorists. Part of us knows that certain wheels are spinning in the background — that the police are working on a plan, that sharpshooters are taking aim somewhere outside our view — but the film limits our point of view to such a degree that we never know when or if those things are actually going to pan out. Our job as viewers is not to land the airplane, but rather to come to terms with the limits of our control. Both pilot and hijacker face an uncertain future, and all we can do is hold on tight.
Posted by Patrick Bromley at 5:00 AM