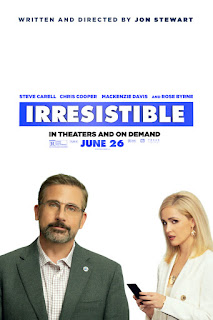 Jon Stewart returns to political satire with a hot take straight out of 2003.

Kind of hard to talk about this one without spoilers, folks. You’ve been warned.

Full disclosure: I’m a child of The Daily Show with Jon Stewart. I came of age during the George W. Bush regime, a hardscrabble era (era) in which we all tried desperately to cope with the juvenile antics of an ill-equipped jackass who stumbled into the Office of the President by way of cultural nepotism, colossal civic ignorance, and a bafflingly-convoluted electoral system that even scholars struggle to justify. That time may be over, but I still remember how much I relied on Stewart & Company to help me understand what was happening, to affirm my dogged hope that, despite our prejudices and insecurities, our culture could and would survive. The Daily Show (along with The West Wing) shepherded my budding liberalism across the threshold into adulthood, and Jon Stewart soon became my Walter Cronkite. My Mark Twain. I carried America: The Book from class to class, a supplement to (and sometimes a replacement for) my actual textbooks. In the early days of YouTube, I found my own little Moments of Zen to share with friends. I miss it. I miss the days when Jon Stewart made it all okay. 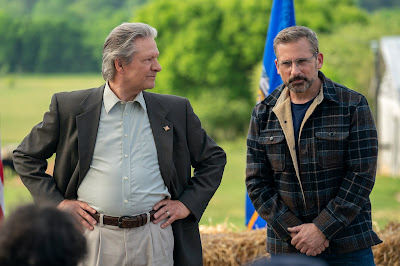 Watching Stewart’s new Irresistible (his directorial follow-up to 2014’s compelling Rosewater), my view of those times grew a little dimmer. I got a sense of just how far we’ve gone beyond “strategery” and “the Decider,” how long it’s been since the U.S. president chewing with his mouth open or condoning military torture felt like a true scandal. Stewart’s protagonist here is Gary Zimmer (Steve Carell), a Democratic Party strategist still smarting from Donald Trump’s stunning upset victory. Hoping to prove he still understands the American electorate, he convinces Wisconsin farmer Jack Hastings (Chris Cooper) — whose wholesome tirade against a bigoted city council has gone viral — to run for mayor. The retired Marine Colonel presents as a principled progressive, and with the help of his daughter (Mackenzie Davis as Diana) and some big DNC money, he seems like a sure bet. Enter Republican strategist Faith Brewster (Rose Byrne), who joins the race in the incumbent's corner in hopes of being the final nail in Gary’s coffin.

Most of Irresistible plays like a fish-out-of-water comedy in which Coastal Elite Gary struggles to connect with Real Americans. Hoping to look more authentic, he tells his assistants to rent him a Ford instead of his usual Tesla. Hoping to seem callused and hard-working, he orders “a Bud and a burger” from the local tavern. He gets fat on Midwestern delicacies and figures out how to run a campaign with dial-up internet. He smiles and waves at strangers. It’s all so quaint! Jack is the real thing, though, and Gary has a gift for turning the Colonel’s battle-tested philosophy into political slogans. Diana may sneer at his cynicism — after all, the Colonel just wants to “bring back the base” and revitalize the local economy — but Gary sees this campaign as a genuine opportunity to get his groove back. He crafts TV spots featuring the Colonel blasting a machine gun and preaching the Bible; he’s a New Kind of Democrat, the ads assure us, a resolute leader for Americans of all stripes. Where the xenopobic and condescending Faith goes low, Gary goes...well, just slightly higher. 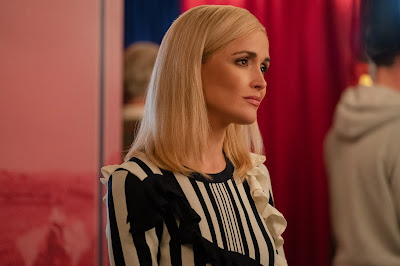 But it’s only in its final movement that Irresistible presents its actual thesis, one so overwhelmingly tone-deaf and misguided that it becomes hard to believe that Stewart was an honest arbiter of civic discourse for so long. Without spoiling specifics, the Colonel’s crusade is soon revealed to be a con, a middle finger to our election economy and an indictment of our campaign finance laws. Money, Stewart insists, is the real winner in every American election. The rest is a show, a lie. Through feigned outrage or performative wokeness, Washington insiders co opt the culture and traditions of hardworking people for political gain and then abandon them once they’re no longer needed. Their concerns are simply currency, their lives simply fodder. Through over-the-top sendups of Fox & Friends, Rachel Maddow, and the like, Stewart lampoons the media’s insistence on a right vs. left narrative that presents false equivalencies and encourages vicious tribalism. The media is toxic, Stewart says, and Americans deserve better. 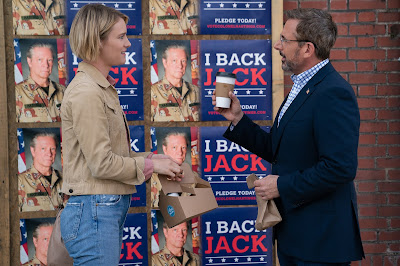 And it is. Craft aside — Stewart is a fine filmmaker, and his overqualified cast does its best with the material — Irresistible is a catastrophically tone-deaf look at a political economy no longer exists, assuming it ever did. Its principles are sophomoric; its arguments miss the big picture of our changing world. Nowhere is social media addressed. Nowhere is systemic inequality addressed. Racism and class warfare are punchlines (see the tiki-torch-carrying frat boys asking voters, “Can I interest you in white power?”). It’s all a joke, and not a funny one. While Stewart’s political operatives sort the citizens of Deerlaken, Wisconsin into focus groups and voting blocs, those citizens eventually rise above the noise and assert their wholesome unity. People are good! There is no racism! There is no classism! No one listens to that Lamestream Media, anyway! Not here, in Real America! In short, Irresistible reveals its writer/director to be just as ignorant to the reality of the American electorate as his flailing lead and just as insulated in his supposed activism as those he purports to lambast. People are being murdered in the streets, Jon. Do better.
Posted by Patrick Bromley at 5:00 AM