I Know What You Did Last Summer (Absolutely Nothin') 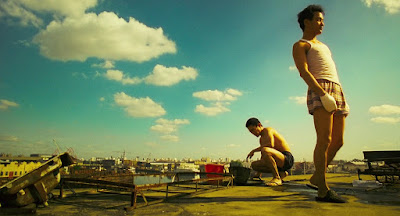 Unless you live in New Zealand (where it’s winter anyway), your 2020 summer vacation plans have probably been a bit... downsized.

Six months ago, you were trying to tune out your cubicle mate’s arrhythmic and amplified mastication of gluten-free quinoa chips as you perused Buzzfeed’s “27 Surreal Places To Visit Before You Die.” Maybe you even bought tickets using a combination of airline miles and a credit card you’d definitely be able to pay off as soon as you got your annual bonus in a few months. You started adding travel tips and cute summer outfits to Pinterest, and found a deal on a short term rental outside the touristy part of town so you could really feel like a local.

And then, Covid happened. So now, you’re missing that cubicle mate as you change your Zoom background to something more exciting than your kitchen table. Well, I’m here to help. Through the power of cinema, you can still see the world -- without leaving your living room or being exposed to the pandemic. Choose your destination!

A Chill Time in Iceland

Eurovision Song Contest: The Story of Fire Saga
Scoff if you must, but this silly musical actually shot on location in Iceland, and it’s pretty gorgeous if you ask me. See it on Netflix.

The Secret Life of Walter Mitty
Ben Stiller decides to stop daydreaming and start doing in this feature-length adaptation of the James Thurber short story. Not everything about it works for me, but Stuart Dryburgh’s cinematography practically plays like a tourism commercial for Iceland. See it via online rental in all the usual places.

No Such Thing
I briefly mentioned this on the podcast last week, but in case you’re unfamiliar: Sarah Polley plays a journalist who encounters an immortal monster in a remote Icelandic village, and they form an unexpected bond. It’s great, and so is the scenery. It’s available for rent on Amazon Prime.

Get Closer to Nature in the Pacific Northwest

Leave No Trace
One of the best movies released in 2018 follows a father and daughter who decide the modern world is a little too much to bear, and they set up a home for themselves in a remote part of the woods. Director Debra Granik brings the best out of her actors (Ben Foster & Thomasin McKenzie) as well as the lush setting in Oregon’s Eagle Fern Park. Currently free via Amazon Prime.

Take a Cruise Without Getting Sick 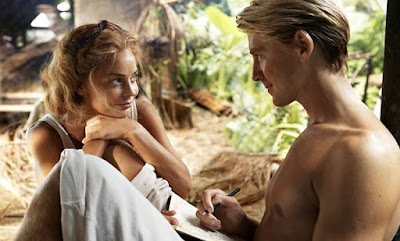 Kon-Tiki
This Norwegian film dramatizes the unlikely journey of ethnographer Thor Heyerdahl and his attempt to cross the Pacific Ocean on a handmade raft. There’s a Skarsgard in this (Gustaf); the other actors you probably haven’t seen before but they are quite pretty and so is the journey across the water. Streaming now on Netflix.

See Some Art and Architecture

Museum Hours
A woman travels to Vienna to visit a relative in the hospital. Finding herself alone in an unknown city, she begins to explore the Kunsthistorisches Museum and strikes up a friendship with a museum guard. Watching it is almost like visiting the museum yourself. Watch via Fandor on Amazon Prime.

Columbus
John Cho and Haley Lu Richardson bond over the striking Modernist architecture in the small town of Columbus, Indiana. I’ve been to Indiana many times, living in a neighboring state and all, and I had no idea this place existed until I watched this movie. Now I want to visit and see these lovely buildings for myself. See it via online rental.

Loiter on the Boardwalk in Atlantic City

The King of Marvin Gardens
Director Bob Rafaelson and Jack Nicholson’s best-known collaboration is probably Five Easy Pieces, but I think this one is secretly their best. Nicholson and Bruce Dern play brothers who both have big ideas for the future, but different approaches about how to get there. Most of the movie takes place in hotels and along the boardwalk of 1970s Atlantic City, a place that looks much different these days. So watch this if you want to travel back in time and travel to a different place. It’s available on the Criterion Channel.

Embed Yourself in Argentina

Happy Together
Wong Kar-Wai takes a break from his Hong Kong homeland and sets a film in Buenos Aires (complete with a tango-infused soundtrack). The story centers on Leslie Cheung and Tony Leung Chiu-wai, an on-again/off-again gay couple hoping a change of scenery will do their relationship good. Wong’s usual cinematographer Christopher Doyle captures the glorious Argentinian landscapes and city life like no one else can. See it on the Criterion Channel.

Go on a Road Trip

Bellflower
In this low budget indie, we get a car inspired by Mad Max, a dude who eats day-old meatloaf, and a trip across the country with stops in Los Angeles, Wisconsin, and Texas. It’s pretty gnarly. Available now on Amazon Prime. 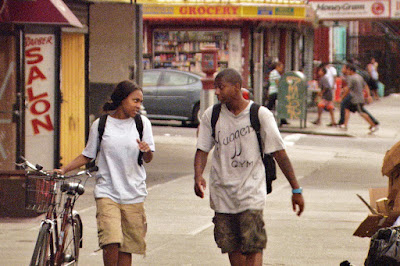 Gimme the Loot
New York has a certain energy about it, and few movies capture it as effectively as this one. Its two young protagonists are graffiti artists and they’re constantly on the go, navigating the city like only two people who grew up there could. There’s a constant back and forth between them that feels like romance masquerading as toughness -- just like New York itself. Available for rent online.

Fall in Love in Europe 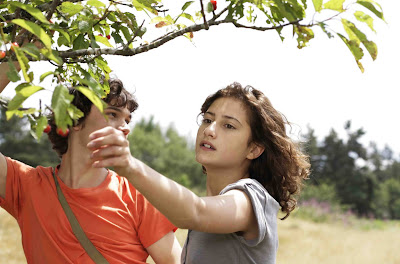 Goodbye, First Love
Young love may not be forever, but there’s nothing like it. Mia Hansen-Love directs this film, with settings as picturesque as Paris and the French Alps. Available through IFC Films on Amazon Prime.

My Summer of Love
If you’ve seen Pawel Pawelowski’s other movies (Cold War, Ida), you know he uses the camera like a paintbrush to craft and capture the understated elegance of the people and places he encounters. The Yorkshire countryside provides the lush backdrop for this story of obsession and adoration between teen girls from different worlds. Available for rent online.
Posted by Patrick Bromley at 5:00 AM

Email ThisBlogThis!Share to TwitterShare to FacebookShare to Pinterest
Labels: goodbye first love, hal hartley, happy together, leave no trace, no such thing, the king of marvin gardens, wong kar wai