Once Upon a Time on a Tour Bus: A Personal Journey with ALMOST FAMOUS 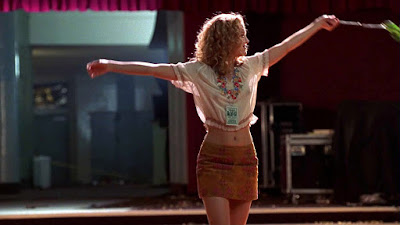 The hypnotic spinning blur of the label. The momentary crackle of dust and that little pop as the needle finds the groove. Static for a moment and then…the music starts and the feeling begins. It’s a feeling as natural as breathing, cycling at thirty-three revolutions per minute. There is really nothing like an old vinyl record.

As great as the pristine 180-gram pressings of today are, there’s still something about the relics purchased from second-hand shops with their musty incense smell or those grabbed from Dad’s record collection. Every scuff, scratch and pop carries a memory that delights, haunts, hurts. But still, you grab that same record off the shelf and play it again and again just to feel those feelings. You know every crackling sound on The Who Live At Leeds, the “woo” after the second verse of Marvin Gaye’s “What’s Happening Brother,” the slightest pop just before the guitar solo of “Stairway” on Zeppelin IV because of the number of times you’ve dropped the needle there just to experience those sublime 49 seconds again.

For me, no other movie captures that feeling in cinematic form better than Cameron Crowe’s Almost Famous, or more specifically, the director’s cut, which he simply named Untitled (just like Led Zeppelin’s fourth album—forgive my previous shortcut). The film is intensely, almost recklessly personal, and I can approach discussing it in no other way than to be savagely personal myself. After all these years, I still feel the same feelings I did the first time I saw the film while still discovering previously unmined gold. As I write this, the song that runs under the closing credits, “Feel Flows” by the Beach Boys, has found its way into my mind. I picture my friends William Miller, Penny Lane, Jeff Bebe, and Russell Hammond as vividly as anyone I have known for the past twenty years. 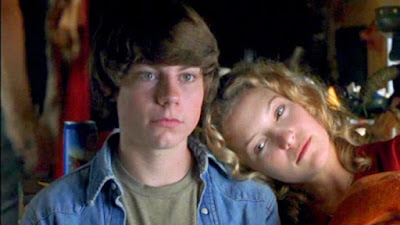 Once upon a time, I was William Miller, desperately in love with that girl. She was shockingly beautiful, confident and outspoken, remarkably popular, but still by miracle of miracles, extremely kind. I, on the other hand, was very overweight, extremely shy, completely awkward physically and socially, and in no sense of the word popular. But for some reason, she not only talked to me, but stood up for me, putting her reputation on the line on multiple occasions. No wonder she was never far from my mind for one second of my seventh-grade year.

Like William Miller (Patrick Fugit) in the film, I never fit in; not so much disliked as ignored. And then: Penny Lane. From the moment she materializes from the shadows at the top of the ramp, she never leaves William’s mind, or ours. Penny’s mysterious heart is the whole reason this movie exists. She is a mist. She is the one who appears for the briefest moment in your life only to disappear, never to be seen again, but never to be too far from your heart. Something about her is so perfect, you question if any of it was real. That is Penny to William. Somehow this angelic apparition is familiar to me, though there is no one quite like her on this earth. That’s part of what makes the character so unforgettable.

We, like William fall madly in love with Kate Hudson as this character, but do we ever really know anything about her? We eventually learn her name. We may or may not know her real age. We discover how she became a band-aid (not a groupie, mind you), but the person beneath it all remains elusive. This is part of what makes Hudson so wonderful in the film, she gives us only the briefest glimpses into this cracked soul, but never completely tips her hand. The middle finger to the high school girls from the bus. The tear wiped away after learning she was “sold to Humble Pie for fifty bucks and a case of beer” followed by, “what kind of beer?” and that sly, fragile smile. The little “mmm” after William declares his love and kisses her while trying to save her from a near-fatal Quaalude overdose. 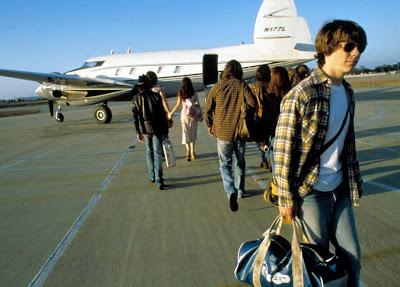 The one moment when we see her completely is when she is alone in the empty venue the day after Stillwater’s greatest performance in Cleveland. She dances freely to the music she hears in her mind as we hear “The Wind” by Cat Stevens on the soundtrack. She slides on the scraps of crepe paper that litter the floor and twirls like a little girl does in a flowing princess dress, a rose for a scepter. The scene is so beautiful it never fails to bring tears to my eyes. Finally, in this solitary moment, we see the real person, still just a young girl behind the stone façade, and it is utterly perfect. Once upon a time, I wanted to be Russell Hammond. I started playing guitar at age six, dreams of being a rock star in my head. I was in a band or two with friends and have even done a few paid gigs over the years, often for musical theater productions. Technically speaking, I have been a professional musician since I graduated from college and got my first jobs as a church music director and then as an elementary school music teacher, which is my main gig now. It’s a delicate thing being paid to do what you love.

Russell (so wonderfully played by Billy Crudup) is the epitome of that. Music runs in his blood, but the artificiality of the music business has killed his love for it. Some of the saddest lines in the film come from Russell. “You hear it in bands all the time. It doesn’t sound like music anymore, you know? Sound like…lifestyle maintenance or something.” On some of my darker days, “I used to be able to hear the sounds of the world, everything. It sounded like music. And now I don’t hear it anymore” sums up how I have felt about music. But then, sitting here listening to The Who’s Tommy as I write this (though in the spirit of the movie, I really should have a candle burning), I’m reminded why I fell in love in the first place. After all, when he finally answers William’s repeated question, “what do you love about music?” Russell’s answer is, “to begin with…everything.” And so is mine.

Once upon a time, I wanted to be a writer, but had no idea how to go about it. That once upon a time was a mere ten months ago, but then I met my Lester Bangs. Well, I haven’t actually met him in person, but because of the magic of podcasting, the internet and film twitter, I consider him a great friend. I struggled with reading, much less writing, for many of my early elementary years. But then I discovered the work of Stephen King and read nothing else for quite some time (no, Mr. King is not my Lester Bangs). From that time on I wanted to be a writer and I wanted nothing more than to write about movies. But life happens, distractions arise, dreams fade. Then out of the blue, I heard my friend tell his story on a podcast and I reached out to him to tell him how much I’d always wanted to do what he does, which is write about movies. He didn’t exactly say “give me a thousand words on Black Sabbath” as Lester Bangs (Philip Seymour Hoffman) does in the film, but I gave him about a thousand words on One Cut of the Dead, and the rest is a whirlwind.

Hoffman’s performance is probably my favorite in a film filled with favorite performances. His epic rants about The Doors and The Guess Who are endlessly quoted around my house. But he also has the knowledge, love and passion to back up his pontificating. His monologue about staying up all night just to write pages of drivel about the faces of Coltrane and his late night phone conversation with William about making friends with the rock stars and being home because he’s uncool are some of the most deeply felt moments in the film. He has a genuine affection for William because he remembers being William. He fulfills the mythical role of the mentor, but with an element of sadness that may well have been a window into Hoffman’s own troubled soul. 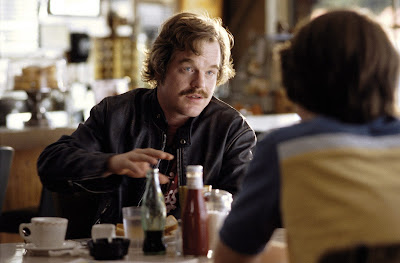 My Lester Bangs is, of course very different from the character in the film or the real-life person, but that mentorship has had a few similarities. Since that first review was published in October, I have contacted him in a panic about being contacted by a big outlet (not Rolling Stone big, but for me in that moment, it may as well have been), I have asked for and received excellent advice, and even been “talked down from the ledge” once or twice. I will never be able to repay him or thank him enough for helping to bring a dead dream back to life, but I do my best to express my gratitude. So, once again, thank you “Lester Bangs,” if you’re reading this, you know who you are.

Once upon a time, well, right now actually, I am finding myself to be much more like Elaine Miller than I ever expected. Before my most recent viewings of the film, I had only admired Frances McDormand’s performance as William’s mother from a distance. But suddenly, as I write this, I have a fourteen-year-old son. I’m not sure how it happened exactly, but out of the blue that baby I once held, the stumbling toddler, and the chubby cheeked kid became a teenager and I’m still not sure how to handle that. Like many parents (I wish it were all, but I know it isn’t), I want to teach my kids to be kind and caring, but also independent. I want them to pursue dreams and shoot for the stars, but I also want them to be safe and secure. It’s the tension felt since the beginning of time. I now have more compassion for Elaine than ever. She is fully aware that her son is living an experience that will be more formative, unforgettable, and teach him more than anything he would be able to learn in his classrooms or her living room. Still, it’s a scary world out there, filled with values she does not understand, not to mention heartbreak, temptation, and near fatal airplane flights. 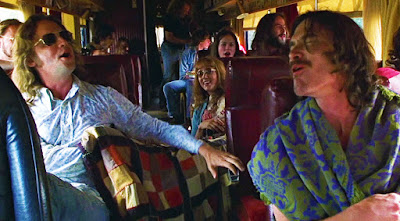 There are so many memorable moments in this movie that they could only come from someone who was there. It is a film so rich in detail and authenticity that I can’t help but find myself fully immersed in its world every time. Singing “Tiny Dancer” on the bus after a night that put the band on the verge of breakup, Jeff Bebe (Jason Lee) sermonizing about how rock and roll can save the world, capping it all off with “the chicks are great,” the t-shirts with Russell and three “out of focus guys,” and “I am a golden god!” have all become indelible moments in film over the past twenty years. But there is so much more to the movie than that. Somehow the one moment that sums up the whole experience for me is just at the end of the “Tiny Dancer” scene when William turns to Penny and says, “I have to go home.” She waves her hand before his face as though transporting him via magic and says, “you are home,” before laying her head on his shoulder. That is how I feel from the handwritten opening credits through the last strains of “Tangerine” as Doris the bus drives off into the sunset. For every second of those two hours and forty minutes, I am home.
Posted by Patrick Bromley at 5:00 AM