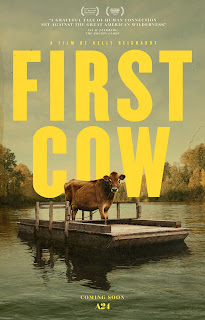 No, A24’s newest feature is not about the president’s cow. Yes, I’m also disappointed.

Writer/director Kelly Reichardt (Old Joy, Meek’s Cutoff) returns to the Pacific Northwest in First Cow, a frontier story of friendship and opportunity in the virgin Oregon Territories. Based on the novel The Half-Life by Jon Raymond and set circa 1820, First Cow begins with a chance meeting between Marylander Cookie Figowitz (John Magaro) and Chinese immigrant King-Lu (Orion Lee). Cookie has joined a band of fur trappers on their way to the nearest trading post, while King-Lu is on the run from some vengeful Russians. Different though they may be, it’s a shared belief in a better life that bonds them in this uncharted land. When Cookie discovers that a local Englishman (Toby Jones as Chief Factor) owns the only dairy cow in the Territories, the new friends see their chance to seize the American Dream for themselves. They milk the cow in the dead of each night, using their haul to make “oily cakes” that they sell to the locals each day. Their product is so good, however, that it soon attracts the attention of Chief Factor himself. 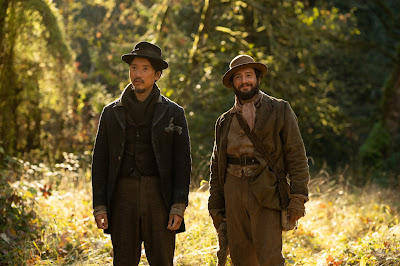 Though it is undeniably a story of frontier life, wide open spaces, and the do-it-yourself ethos of upstart industry, First Cow is hardly romantic or reverent in its presentation. Reichardt shoots in a cramped 4:3 aspect ratio that robs us of the predictable landscape and horizon shots so common to the genre. William Tyler’s score trades bombastic symphony for moodier, more contemplative tones. While its characters are hell-bent on success in business, the film itself is intensely critical of capitalism’s relationship between labor and production. Still, First Cow isn’t oppressive or dour. It’s much more than a hard-luck tale. We’re encouraged to celebrate Cookie and King-Lu as they hold spirited brainstorming sessions about how to turn their nascent profits into expanded enterprise. We’re proud of the mild-mannered Cookie when English moguls gobble down his wares. Somewhere inside, we’re all like King-Lu: Cautiously optimistic. Eager to prove our worth. Ready to bet on ourselves.

And that’s important. That’s what gets us through the muck and the mud and the rain and the sludge of First Cow. The English nobles debate the availability of beaver pelts and lament the ever-changing fashions in France, but our boys are focused on the incredible opportunity inherent in a blank page. “History hasn’t gotten here yet,” King-Lu tells Cookie. This is their chance to make it. Rather than chart new courses or scale new monuments, though, the pair make their mark by bringing these transplanted workers a flavor of home: Each oily cake, they say, tastes like their mother’s cooking and smells like the neighborhoods of their youth. It’s a nice comment on the emotional intention behind our consumption. It’s just the milk, of course, but Cookie and King-Lu have carved out a niche in a willing market. It’s a strange land eager to be made familiar. Magaro and Lee shine in these moments when the wheels start moving; Magaro is a delicate touch who works in the spaces between dialogue, while Lee is just the slightest bit more animated, more likely to think out loud. 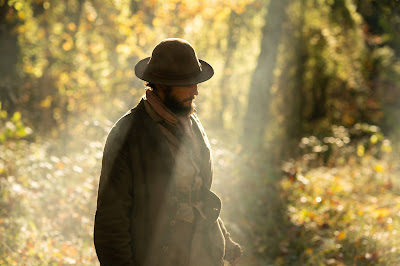 And then there’s Toby Jones’ aptly-named Chief Factor, the foppish Brit too confident in his status to see all the chicanery happening right under his nose. “Some men can’t believe they’d ever be stolen from,” King-Lu says. “They’re too strong.” Factor is plenty strong, we think (as is his second, Scott Shepherd’s “Captain”), but he’s Old World. His mannered elegance and diatribes on the appropriate punishments for mutinous crewmen reek of a European caste system that just doesn’t vibe with the untapped American frontier. He enlists Cookie and King-Lu because he wants them to impress the rest of the local elite with something new and delicious, not realizing that he’s also signaling his own obsolescence. His pride in the titular first cow is in little more than her fine breeding. He’s unfocused. He’s missing the point. “She doesn’t produce much milk,” he says, not knowing that the boys are carrying off the fruits of her labor. His eventual revenge is predictable and uninspired; he may get our boys, but he’ll never break their spirit. 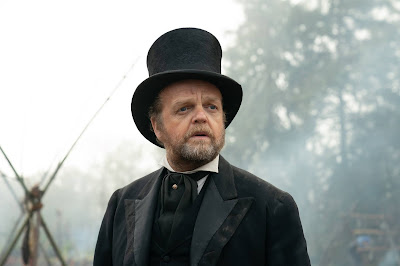 And what’s nice about both of our boys — what really forms First Cow’s heart — is that neither lets their ambitions corrupt them. There’s no backstabbing, no deceit. King-Lu never manipulates Cookie’s kind heart or earnest intentions. Cookie’s provincial squeamishness never gets the better of him. The wheels of commerce may turn around them, but their friendship comes first. And even though First Cow’s modern-day opening foreshadows a bitter end for both, Reichardt doesn’t feel beholden enough to that result to compromise their bond in life. She chooses to end on what keeps them together instead of what will bring them down. And that’s damn hopeful. That’s damn human. We get to live with what might be. We get to embrace Cookie and King-Lu’s eagerness for more, even when we wish they’d just take the money and run. We get to hope against hope that they’ll build their dynasties and live their dreams. Is there anything more American than that?

First Cow is available on VOD platforms on July 10th.
Posted by Patrick Bromley at 5:00 AM