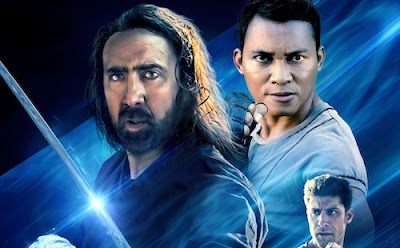 A new martial arts actioner from the director of Kickboxer: Retaliation and starring Frank Grillo and Tony Jaa? Yes, but more importantly it's the new Nicolas Cage movie.

2020 has been a garbage fire in almost every conceivable way, but it didn't necessarily start out that way for me. It started out with me watching every single Nicolas Cage movie, from his theatrical releases through his more recent DTV offerings, reaffirming once again why he's my favorite actor. I won't say I loved every single one of his movies I saw for the first time -- it's hard to wrap my arms around Pay the Ghost -- but I enjoyed the vast majority of them and nearly always liked him in them, even when the movies didn't totally work. He loves to act and he loves to work, qualities for which he should be celebrated and not penalized. If he wasn't so committed to acting (and to paying off enormous debts, it should be mentioned), we might not get turns like the ones he gives in Jiu Jitsu. 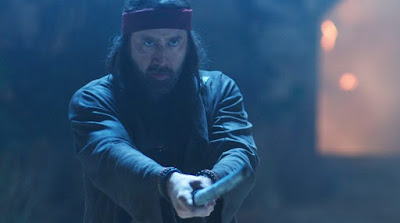 Entertainingly insane and insanely entertaining, Jiu Jitsu is bonkers action cinema of the highest order. There are elements here for three or four movies, all crammed together into one story that's part martial arts, part science fiction, part mystic nonsense, and part Nic Cage goofing off on screen. The premise is this: every six years, a comet passes Earth and opens an ancient portal, through which an alien enters looking for a fight. If he gets an honorable opponent, he fights and leaves. If, however, his opponent runs or tries not to fight, the alien will wipe out the human race. This cycle, he comes for Jake (stuntman and actor Alain Moussi), an amnesiac who doesn't understand why he's being targeted. Jake gets help from a team of fighters including Frank Grillo, Tony Jaa, and Juju Chang, as well as sage wisdom and paper hat advice from Wylie (Cage), who knows the truth about why Jake is being hunted.

So it's Predator meets Beyond Skyline meets latter day Nicolas Cage. This, for fans of #HeavyAction, is a recipe for success. It's ridiculous in the best ways, with a plot that's both too derivative and overly complicated at the same time. Co-writer and director Dimitri Logothetis leans hard into the B-movie silliness, always playing it straight except for when Cage is on screen. He appears to have been given some latitude in his limited screen time. The cast is otherwise straight-faced, too, though they've mainly been hired on the basis of their physical abilities and not necessarily their thespian skills. Star Moussi obviously has the goods when it comes to the fight sequences (of which there are many), but he's still green in front of the camera and lacks the gravity and charisma of many of his action star predecessors. Perhaps Logothetis knows this, which is why he brings in heavy hitters like Grillo, who is more or less wasted here, and Cage, who makes the absolute most of his scenes. He's clearly enjoying himself. 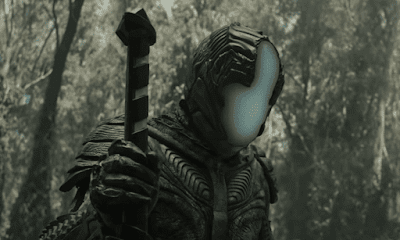 Cage is not quite up to the fight scenes, though, which leads to a lot of obvious body doubling, long distance angles, and shadowy photography. That's a shame for an action movie like this, which is so much about the performers doing their own stunts and choreography. Logothetis relies too heavily on speed ramping and slow motion at times, dulling the impact of many moves, but he also has a lot of fun staging fights in full show-offy style, none of which tops an early sequence that continually shifts from first person (Hardcore Henry style) to third person and back again. Another sequence uses the Spike Lee shot over and over, in which the camera is strapped directly to the actors' bodies as they move through the scene. When so much DTV action has succumbed to sameness, it's very entertaining to watch Logothetis having such fun riffing on the visual language of the genre. 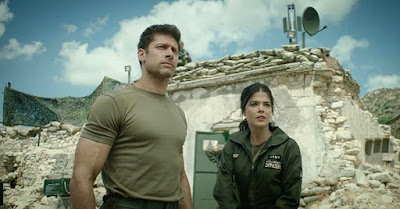 As both a diehard action movie fan and a lover of all things Nic Cage, Jiu Jitsu was practically made for me. Hopefully it's made for you too. If you know anything about it, whether it's from reading this review or watching the trailer, it's exactly the movie you want it to be: silly and splashy, full of cool fighting and a batshit crazy Cage performance. It's a far cry from great cinema. It's candy, more Pop Rocks than popcorn -- loud and fizzy, pure sugar rush with no nutritional value. After the week...the month...the year we've all had, it's exactly what's needed. Who's ready for Jiu Jits2?
Posted by Patrick Bromley at 5:00 AM