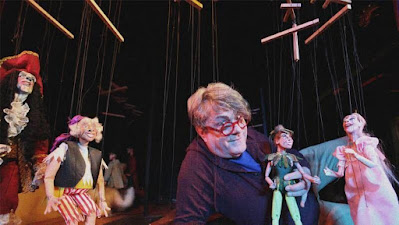 The director of At The Drive-In returns with another celebration of creative chaos.

Few characters in cinema arrive on screen as fully-formed as Robert Brock, the co-founder and artistic director of central Pennsylvania’s Lancaster Marionette Theatre. We first meet Brock on stage, framed in red spectacles and shrouded in homemade fog, every bit the Man Behind the Curtain in his miniature production of The Wizard of Oz. A self-described “legend in his own mind,” he’s been the theater’s creative force since 1990 — he writes, directs, choreographs, and performs each thirty-five-minute engagement himself. The Lancaster’s diverse program of kid-friendly standards are his design, as well, not to mention the Grown-Ups Only cabaret revues that pay loving tribute to the likes of Judy Garland and Liza Minnelli. Now age 63, Brock is the best kind of old stage pro: He bleeds for his art. He builds puppets for his art. He squeezes into bustiers and fishnets for his art. Though he sometimes performs for audiences that number in the single digits, he never gives less than his best effort. Every moment on stage is sacred, even if that stage is only six feet wide. Encapsulating the entirety of Robert Brock in a single motion picture would be a Herculean, nigh-impossible task, but Alexander Monelli’s Marionette Land does its level best to capture the fussy diva energy that makes him such an engrossing personality. As we watch Brock work through the beats of his latest Peter Pan script, we can’t help but see him as a bit of a Lost Boy in his own right, someone for whom adulthood always rang dull and uninspired. Where’s the art in paying bills or establishing domestic equilibrium? After all, he has Mary Lou — the theater’s co-founder, house manager, and producer, who also happens to be Brock’s mother and roommate (though he may prefer the term “cohabitator”) — to manage the salient details. Peppered in-between Brock’s vocal rehearsals and costume fittings, the film’s autobiographical asides chronicle his family’s working-class history and detail Brock’s lifelong struggles with mental health. Each segment only further solidifies the obvious: Brock was made for the stage, and everything else is a distraction.

Documentarian Alexander Monelli is quickly making a name for himself as a keen observer of the small human details that inspire grand creative undertakings. His last film (the wonderful At the Drive-In) was as much a love letter to the storied Mahoning Drive-in Theater as it was to the eccentric, multi-generational band of cincephiles that make up its staff. Marionette Land runs in a similar vein, with care taken to highlight the Lancaster Marionette Theatre’s significance to its community and the Brock family’s unwavering stewardship through the leanest years. And the years have been lean. Despite its austere trappings, the Lancaster has spent nearly its entire life on its back foot, and it seems to be only local donations and nonprofit designation that have kept it from the brink of financial ruin. This makes the film's final act, recorded in early days of the COVID-19 outbreak, one of the more heartbreaking in recent memory: Plans for a 30th anniversary gala are postponed indefinitely, and Brock is left scrambling to move his operation to YouTube. 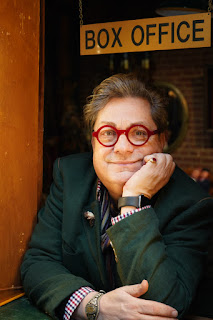 That feels okay, though, because Brock’s energy is infectious and his resolve is unbreakable. No one who has spent a lifetime auditioning for the Broadway stage would let a little worldwide pandemic intimidate them. He’ll simply create a new stage, craft a new venue for his homespun fairy tales and outrageous dance numbers. He’ll continue to battle naysayers who argue that a sexegenarian shouldn’t play with puppets or live with his mother. Go ahead and talk; you won’t break him. If Marionette Land proves anything, it’s that a sincere love for the arts can often feel like a life sentence to a very lonely mental prison, one in which we’re doomed to futz with the lights and adjust the bars until we reach some infinitesimal degree of perfection that would barely register to anyone else. That’s inspiring, though. It’s nice to know that someone is still behind the creative wheel in this cynical, disaffected world of ours. The rest of us may never truly hear the music that moves Robert Brock, but we can try to dance along, anyway.