What can you say about a man who threw it all away?

When I was in high school, you couldn’t find a bigger John Belushi fan than me. He was the star of my favorite television program, Saturday Night Live, and I soon found out he had been a big part of Chicago’s Second City improvisational comedy club and The National Lampoon Radio Hour. I loved his impressions. They were all so weird and specific and obscure: Toshiro Mifune... Marlon Brando... Joe Cocker? Soon, he would star in Animal House and sing on the Number One album of the summer of 1979, Briefcase Full of Blues.

By the age of 33, he would be gone, a victim of drug addiction. 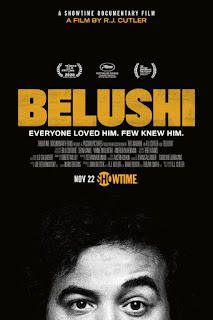 I was very excited last week to watch the Showtime premiere of a new documentary about John Belushi that had been on my radar for some time. The film—titled simply Belushi—was supposed to get a theatrical run earlier this year... but we all know what happened to theatrical runs.

The best things Belushi has to offer are never-before-seen excerpts from his diary and letters to his wife Judy. They’re read by Bill Hader, who doesn’t exactly do a Belushi impression, but captures the spirit of the big, conflicted guy. These fragments, shown onscreen in Belushi’s own handwriting, offer a glimpse of a man out of control, a man full of talent and insecurity, a sad clown, a man with a hole inside himself so big that nothing could fill it... not success, not money, not adoration, not love.

Unfortunately, since Belushi died, many of his contemporaries have also passed away: Gilda Radner, Harold Ramis, Carrie Fisher, Penny Marshall, Tom Davis, Michael O’Donoghue, Doug Kenney, Matty Simmons, Chris Miller, and half of the original Blues Brothers band. In 2005, Belushi’s widow Judy collaborated on a biography of her late husband with Tanner Colby. It’s a wonderful, big coffee-table book (also titled Belushi) featuring lots of interviews with those who knew him. R.J. Cutler, the director of the new Showtime documentary, uses Colby’s copious interview audio tapes to take the place of talking head interviews. This is great because we hear these famous voices giving their unique takes on Belushi, but it is bad in that we never get to see the faces behind those voices. Colby only made the tapes to be transcribed, so the audio quality is pretty rough, and the opinions expressed are all fifteen years old. 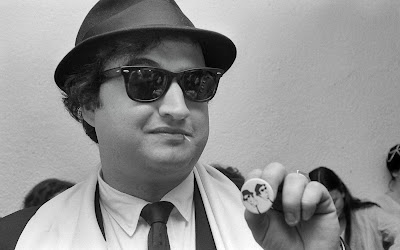 I also found the documentary’s copious use of animation problematic. Cutler uses it to illustrate and comment on moments in Belushi’s career for which there is no footage. Unfortunately, he relies on the bilious trope of Belushi being “just a kid who never grew up,” so we are treated to cartoons of the adult John facing very adult setbacks, only to morph into “little kid John” looking innocent and scared. It’s a handy visual metaphor for the filmmakers’ complete lack of insight into the material they are presenting and their inability to go beyond simplistic cliché. “Gee, he was just a kid at heart.” Yes, a kid addicted to crack cocaine and heroin. 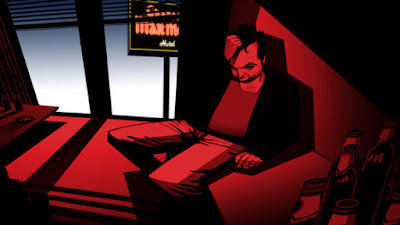 Maybe it’s wrong to expect earth-shaking insight and commentary when the subject of the film has been discussed at such length: Bob Woodward’s controversial biography, Wired, and its truly awful film version; two full-length A&E Biographies, cable specials with titles like Belushi: The Last Twenty-Four Hours; and innumerable magazine and newspaper think pieces. I know that there was something special about John Belushi. I just don’t think any book or documentary has ever captured it. And I don’t think the fact that this project comes with the blessing of the Belushi family did it any favors. The documentary goes all soft and mushy just when you want it to start asking hard questions or presenting a more concrete timeline of events.

Many years ago, I wrote about meeting John Belushi in the summer of 1980. Here’s a bit of that column:

“My friend Terry and I managed to snag tickets to the Blues Brothers Chicago premiere from a local radio station. The promotional tickets urged us to ‘dress like the Blues Brothers,’ and we did. We were later featured in the local paper, posing with 20 other sets of Blues Brothers -- a Blues Army, if you will.

Hanging around the lobby at the end of the screening, Terry and I noticed a bearded figure in the corner. It was Blues Brothers director John Landis. We recognized him because we were such fans of his earlier film Animal House, but no one else in the lobby seemed to know who he was. We struck up a conversation, and Landis was personable and talked to us for a long time. He found it curious that we had seen Animal House so many damn times and delighted in the trivia we brought to his attention. By and by, another man joined our group, Bernie Brillstein, who was John Belushi's manager. The four of us talked and talked. Brillstein suddenly asked, ‘Would you two guys like to meet John and Danny? They're presenting the City of Chicago with a check tomorrow. If you guys come to City Hall, I'll make sure you meet them.’”

I got to meet Belushi that day, but I’m not sure he met me. I remember Dan Ackroyd getting out of his limo in front of City Hall and talking to us; he was friendly and full of good humor. Later that morning when I finally met John and asked for his autograph, he didn’t seem to be all there. It was as if I were talking to the Wizard of Oz, and the real John Belushi was far away—a “man behind the curtain” I was cautioned to pay no attention to. It was a bizarre encounter, to say the least, and that’s why I remember it so well all these years later. Belushi signed my program in ball-point pen and, with each passing year, the ink fades a little more. Soon there will be nothing left of his autograph but the memory of it. 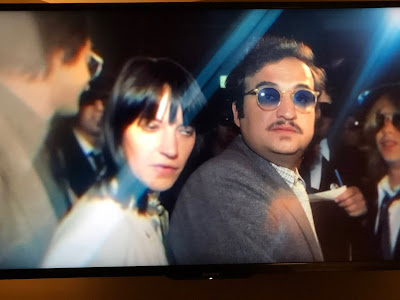 I got to revisit that meeting, thanks to the new Showtime documentary. At the 72-minute mark, the screen shows some video footage and still pictures from that day at Chicago City Hall. For a mere flicker of an instant, there’s my friend Terry between Dan Ackroyd and Judy; there’s me right behind John. That was June 21, forty years ago. 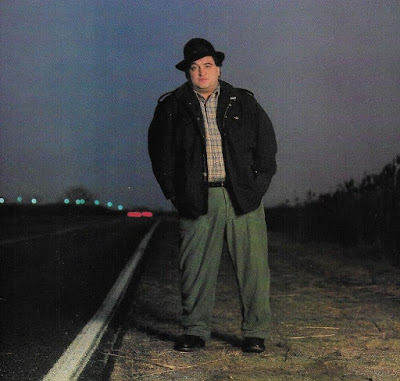 My very favorite photo of John Belushi was taken by Annie Leibovitz and featured in Rolling Stone magazine. It hung in my classroom for years. The photo is both funny and haunting, as befitting its subject. John stands by a nearly deserted highway at night. Behind him in the distance are the tail lights of a lone departing car. John looks bloated and sad, as if he didn’t want to stop to have his picture taken or he’s not altogether sure of what’s going on around him. His face is a Janus-mask; the left side sports his trademark raised eyebrow, quizzical, leering, and funny; but the right side is lost, staring into the distance for something or somewhere that is gone. The picture was taken on January 21, 1982. Belushi would be dead in seven weeks.
Posted by Patrick Bromley at 5:00 AM