by Robyn Buckley and Adam Riske 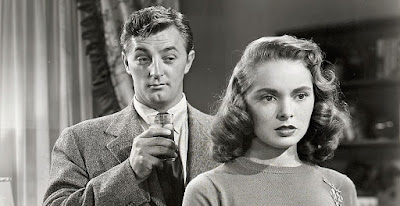 A look at four Christmas movies not enough people talk about.

Robyn: Hi Adam. Same to you!

Adam: I’ll kick us off with my first pick - the 1949 romantic comedy Holiday Affair, starring Robert Mitchum, Janet Leigh, Wendell Corey, and Gordon Gebert in one of the greatest kid performances ever put on film. There’s a scene early on where Gordon Gebert looks like he’s breaking during a take with a fit of kid giggling and when Janet Leigh asks him what’s up, he goes, “I dunno. I just feel good.” It’s the best.

Patrick introduced me to Holiday Affair a couple of years ago when he and I did our Calendar episode. It was one of the movies he would program for Christmas week at his hypothetical repertory movie theater. I think I watched the movie about a month after his recommendation and fell in love with it. This recent viewing only deepened my appreciation for the movie, which is pretty quirky for a 1940s romantic comedy. First off, the Robert Mitchum character is flat out trying to steal away Janet Leigh from Wendell Corey and he’s super up-front about it. I’ve made the joke that his attitude is basically, “This is going to happen. You can either leave or sit there and watch.” I love that the movie wants us to root for this to happen. Janet Leigh is great here too as a secret shopper for a department store and widowed single mother of a young son. I love workplace holiday comedies like this, Miracle on 34th Street, and The Shop Around the Corner. The milieu of department stores during the holidays is very appealing. I’m sorry I wrote “milieu.”

What do you think of Holiday Affair and what is your first pick?

Robyn: I love Holiday Affair and I completely understand throwing over Wendell Corey for Robert Mitchum. The man is a hunk. I agree with you that Janet Leigh is fantastic and that Gordon Gebert gives a kid performance for the ages. All around a truly great Christmas pick! 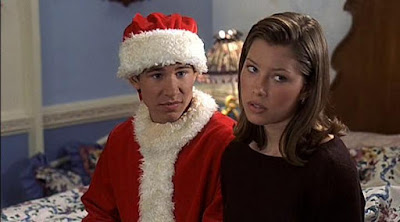 My first choice is… maybe a bit less of a classic? I went with 1998's I'll Be Home for Christmas, starring Jonathan Taylor Thomas, Gary Cole, and Jessica Biel. I hadn't seen this movie since '98 and barely remembered anything. It's rough! I don't mean I dislike it - I find that my tween love for JTT (playing Jake) is still in full swing and that overall I enjoy I'll Be Home for Christmas. It's rough in that it's a Christmas movie about a smarmy jerk who just continually has bad things happen to him. There's very little reprieve in the torment that Jake suffers. It's a Christmas movie in the loosest sense of the phrase. There is a Santa! Snow appears! There is no goodwill towards man.

And yet, I find myself amused throughout. Do I constantly want to yell at the screen when a new crazy dilemma arises? Of course. But I still had a good time with this one! Jonathan Taylor Thomas is at his most charming, while also being a complete tool. Jessica Biel is lovely as the girlfriend who is honestly too good for any of the men interested in her.

Adam, what did you think of I'll Be Home for Christmas? And what is next on your list?

Adam: Against my better judgement, I’m a big fan of I’ll Be Home for Christmas. I know it’s not good, but I’ve seen it probably 10 times over the years. It’s schlocky in a fun way. I made the joke to you that the movie feels like if Disney produced a PG-rated Uncut Gems, since our protagonist finds his way into one predicament after another. The movie’s such a time capsule of the Disney-Pop era (era) in the late-1990s, where it was like an MTV Total Request Live (TRL) boot camp for tweens. 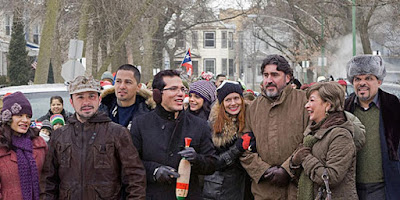 My second underrated pick is another movie I’ve found myself returning to a few times, which is 2008’s Nothing Like the Holidays. It’s a holiday dramedy centered on a Chicago-based Puerto Rican family starring Alfred Molina, Elizabeth Pena, John Leguizamo, Freddy Rodriguez, Vanessa Ferlito, Debra Messing, Melonie Diaz, Jay Hernandez, and Luis Guzman. The movie is fun to watch just as a hangout with that cast alone. Unlike many holiday family dramatic comedies (The Family Stone comes to mind), Nothing Like the Holidays finds a way to feel acidic but also sweet, which helps it land the emotional beats better because I still care a lot about the characters. It’s also a really good Chicago movie, which is something of a rarity these days. I noticed recently that a large portion of Christmas movies take place in Chicago but very few of them are filmed in Chicago. Nothing Like the Holidays is even better because it showcases the Humboldt Park neighborhood, which is a section of the city that’s rarely in movies. Plus, Nothing Like the Holidays inspired me to try Coquito for the first time and it’s delicious.

What did you think of the movie and what’s your second pick?

Robyn: I enjoyed Nothing Like the Holidays more than I had expected! Christmas dramedies with dysfunctional families don't always work for me -- they're often too over the top for me in that nobody feels realistic. In this one I found myself interested in each of the storylines and rooting for all of the characters.

My second pick is 1989's Prancer. I have a ton of affection for this movie as I grew up watching it. I've probably seen it once a year since I was a small child. Prancer is a family drama about a 8-year old Jessica (Rebecca Harrell) living on a farm with her dad (Sam Elliott) and her older brother. Jessica's mother passed recently and she has a very strained relationship with her father. The plot of the movie kicks off when a town decoration of Santa and reindeer breaks. Jessica finds a lost reindeer in the woods and becomes convinced that it is the Prancer from the town decoration - she believes that she must care for him for Santa. 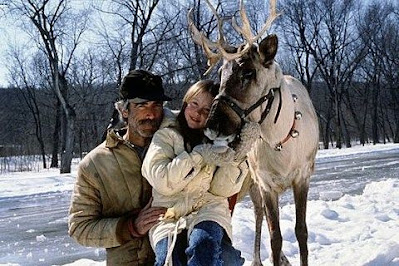 Trying to describe Prancer is more difficult than I had expected… it's an odd movie. It's also a movie that as I grew older I realized how many recognizable actors are in it. Sam Elliott, Cloris Leachman, Abe Vigoda, and Ariana Richards all appear! I like this movie even though it is pretty depressing - there's a lot of talk of lost parents, an incredibly difficult relationship between a father and his young daughter… just a lot of heavy stuff for a Christmas movie with a child as the lead. Jessica is an exceptionally well realized child character. She's silly and carefree, but also incredibly burdened with the loss of her mother. She is willing to push back against authority figures if she believes it is the right thing to do. Jessica is also kind of a jerk -- she's quick to anger and always feels she's in the right. She feels as if she is a real child.

Adam, what did you think of Prancer?

Adam: I thought it was weird. It’s very gritty for a kids movie and the way it’s shot was as 1989 as it gets. I felt like a time traveler. I agree with you that the lead kid’s performance was very naturalistic in a way we usually don’t see in holiday movies. I’m glad I finally watched it. Prancer was on my radar since I was a kid, but I never watched it because I thought if I asked my family to take me to see it in theaters that it would be equal to me renouncing Judaism. I was a neurotic kid. It’s a good pick! I liked the movie overall even if it was very different from what I expected it to be all these years. Plus, it has the dad from My Big Fat Greek Wedding (Michael Constantine) and he rules.

Happy Holidays everyone! Leave a comment with your underrated Christmas movies.
Posted by Patrick Bromley at 5:00 AM

Email ThisBlogThis!Share to TwitterShare to FacebookShare to Pinterest
Labels: christmas movies, holiday affair, i'll be home for christmas, nothing like the holidays, prancer, underrated christmas movies