Two for One: FRANCES HA & GIRLFRIENDS 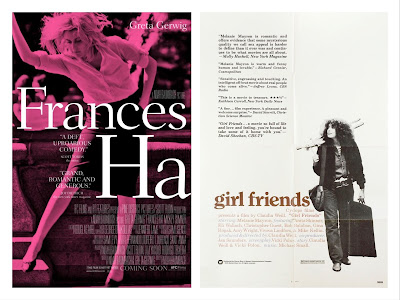 “I'm so embarrassed. I'm not a real person yet.” - Frances Halladay

I don't know if I've ever had a friend like Frances and Susan have in Frances Ha or Girlfriends. That makes me sad. Frances has a little monologue that explains that type of friendship perfectly:

“I want this one moment...it’s what I want in a relationship, which might explain why I’m single now. It’s hard to...it’s like that thing where you are with someone and you love them and they know it, and they love you and you know it but it’s a party and you’re both talking to other people and laughing and shining and you look across the room and catch each other’s eye not because you are possessive or that it’s precisely sexual but because that is your person in this life. And it’s funny and sad, but only because this life will end, and it’s a secret world that no one else knows about that exists right there in public unnoticed - sort of like how they say other dimensions exist all around us but we don’t have the ability to perceive them. That’s...that’s what I want out of a relationship. Or just life, I guess. Love. Blah, I sound stoned. I’m not stoned.”

I do have one friend that resembles something like this – Kevin. There's something special about that one, close platonic friend that you just can't have in a romantic relationship. Complete, unabashed honesty. I'm not saying I have all these secrets I keep from my wife, but Kevin knows very intimate details about my younger self's exploitations that for one reason or another my wife doesn't know. It's mostly small details that I've forgotten at this point, but moments after those things happened, Kevin knew about them. But that was when we were young, dumb, and full of... more energy than I have now. 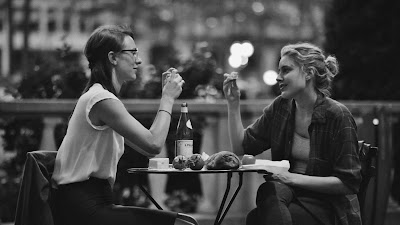 We kick off our evening of friendship with Noah Baumbach's Frances Ha. I realize my last 2-4-1 included a Baumbach film. To that I say, “I love Noah Baumbach and I don't care who knows it!” The movie follows a 27-year-old dancer named Frances (Greta Gerwig) living an aimless life in New York City. After her best friend Sophie (Mickey Sumner) moves out Frances ends up being a sort-of-nomad, moving from couch to couch, flitting off to Paris, living in her alma mater's dorms, waiting for her big break. As in every Baumbach story, the film is full of characters both likable and unlikable, and everything about this world is romanticized to (perfectly) preposterous levels.

We follow up a modern tale of friendship with a late-'70s cult masterpiece. Directed and co-written by Claudia Weill, Girlfriends follows Susan (Melanie Mayron), a photographer in New York City looking for her big break while stuck shooting weddings and Mizvahs both Bar and Bat. Like Frances, Susan had been living with her best friend Anne (Anita Skinner) who is now getting married. Susan feels a sense of betrayal because her best friend is forcing her to live her own life. Susan's life is further complicated by toxic romances – Eli Wallach as a married rabbi, and Christopher Guest as a controlling douche. Girlfriends also explores more of what Anne is feeling. She doesn't necessarily feel trapped in a loveless marriage (to Bob Balaban!), but she does miss her freedom. 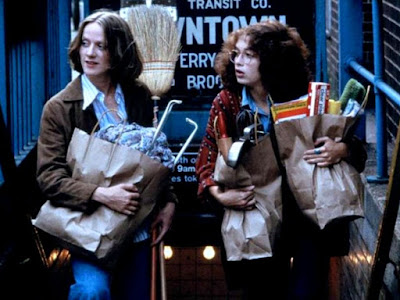 While I relate more to Frances in the first film, Susan's life seems more realistic in the second. I remember my wife and a friend of hers went through a similar situation when we started dating. I don't know if it's jealousy or something else, but Kevin and I never went through that sort of thing. So on that level, I don't relate to what Frances or Susan are going through at all. But having a friend so close where a look equals 1,000 words is something special.

Girlfriends feels much less romanticized and brutally honest compared to Frances Ha. Perhaps it's because it was written by two women who had gone through a similar situation. Melanie Mayron delivers maybe my favorite performance I've seen all year. She's adorable and vulnerable and strong and capable of doing everything she was scared to do before she struck out on her own. And that's the same message we get from Frances Ha. While friendships are key to living a fulfilling life, we're still our own person and need to take charge of our own lives. That's why I love movies. We see a pretend story but at the same time become inspired to do what we need to do in the real world.
Posted by Patrick Bromley at 12:00 PM