by Robyn Buckley and Anthony King 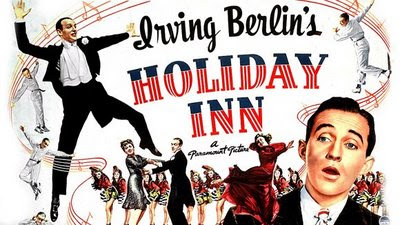 Kick off 2021 with a song!
Anthony: Welcome back to A Musical Review, and thank you for the tremendous response to the first edition! This time around we’re heading to Connecticut with Bing Crosby, Fred Astaire, and Marjorie Reynolds for Irving Berlin’s Holiday Inn, directed by Mark Sandrich. I saw this for the first time two years ago, and it was actually my introduction to Astaire. Not surprisingly, I was hypnotized by his dancing and charm as I had been with Crosby’s voice and charm. As I’d briefly mentioned in our conversation about 42nd Street, no one is as light on their feet as Fred Astaire. He’s so light, in fact, that during my rewatch of Holiday Inn I noticed he tends to rush his tapping, always a hair ahead of the beat. Nevertheless, no one moves like Astaire.

The movie tells the story about the variety show trio of Jim Hardy (Crosby), Ted Hanover (Astaire), and Lila Dixon (Virginia Dale). Jim is fed up with show business and wants to move out to the country and live a quiet life with his love, Lila. Unbeknownst to him, Lila and Ted have fallen in love (that’s a common theme in Jim and Ted’s friendship). After breaking the news to Jim, Ted and Lila continue their careers in show business and Jim buys an inn in Connecticut where he realizes it’s more work than he imagined. Jim gets an idea about turning the inn into a show club where it’s open only 15 times a year - during holidays. After Lila runs away with a millionaire, Ted drunkenly comes up to the Holiday Inn for New Year’s Eve where he falls in love with Linda Mason (Reynolds) but can’t remember what she looks like because he was so drunk. After a comedy of errors of Jim trying to hide Linda (who are now engaged) from Ted the inn continues its success until Hollywood producers come and steal away Linda and Ted. Phew. 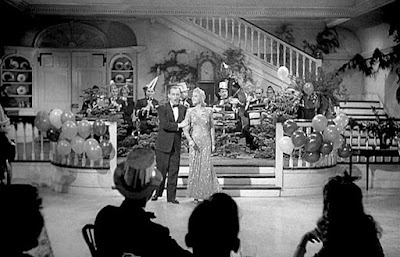 I do enjoy Holiday Inn, but I have never really been able to warm myself to it the way I have other musicals. You described the plot above, but if you had said "this is a movie of loosely connected song and dance routines with no real plot," I would have agreed! It's also minimally a Christmas movie, isn't it? It's a HOLIDAY movie… just a semi-dreamlike celebration of extremely random holidays. You want 18th Century costumes with a jazz routine for Washington's birthday? You got it. I find Holiday Inn to be a movie that almost works better the less attention you pay to it; just let the musical numbers wash over you.

Anthony, in the battle of Jim versus Ted, who reigns supreme for you? Or do you take a third option with Linda?

Anthony: Oh it’s Linda all the way. For one, Marjorie Reynolds is a smokeshow. Two, she’s got moves and a voice. I just wish we got more of her! Between the boys, I’m a Jim guy. Ted’s cocksure attitude is a huge turnoff for me. And he’s not much of a friend to Jim, always stealing his ladies. I do love Astaire, though. The scene of him drunk dancing shows how much of a physical comedian he really was.

It’s funny how you said it seems like Holiday Inn is just a movie of loosely connected songs. Irving Berlin had come up with an idea of this inn that was only open on holidays and wrote songs solely based on that simple idea. Paramount bought it and then jimmied a script around the previously-written songs. Proving that point even further is “Song of Freedom,” the song Crosby sings before Astaire’s firecracker dance. My wife commented about how out of place it seemed - the song features clips of American bombers and warships and soldiers in a propaganda-esque montage. The attack on Pearl Harbor occurred while filming, so the filmmakers squeezed this one in to show support for American military.

And while we’re discussing songs, let’s address the elephant in the room. The song “Abraham'' features several cast members, including Crosby and Reynolds, in blackface. The lyrics tell how African Americans are so thankful to Abraham Lincoln for freeing the slaves. As you can imagine it’s as cringy as they come, and if that’s cause enough for you to never watch this movie we wouldn’t blame you.

What’s your take on the men in the film seeming to always make the decisions for the women? 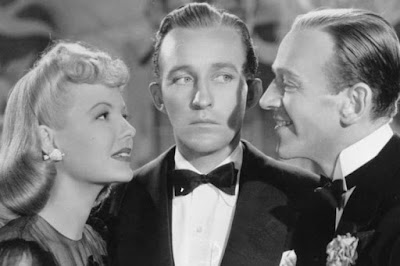 Robyn: I don't love that! We're told at the beginning of the movie that both men are in love with Lila and that she is caught between them. But she seems more to love performing and is only going along with what Ted and Jim expect of her. Later, Linda becomes engaged to Jim through a casual conversation where he sort of proposes? It's a misunderstanding that he goes along with because it benefits him. Linda goes to Hollywood because...why? She doesn't seem to have any urge to leave the Inn, and really only goes to spite Jim. Linda becomes (maybe?) engaged to Ted. He talks about their upcoming marriage, but you also get the feeling he didn't actually propose and assumed she would go along with marrying him.

...I may have had more issues with how the men acted in Holiday Inn than I had realized.

Is this a movie musical you would tell people to seek out? Does it add anything to a Christmas viewing list?

Anthony: While I would recommend this one, I'd add the disclaimer of the blackface sequence, and I wouldn’t necessarily call this a Christmas movie. I mean, for god’s sake watch White Christmas this time of year! It’s the better movie. I still do enjoy Holiday Inn quite a bit. Let us know what you think about the movie.

Next month on A Musical Review, Robyn and I will be talking about my favorite musical of all time, Fiddler on the Roof, directed by Norman Jewison. Until then, happy holidays!
Posted by Patrick Bromley at 5:00 AM