You know that you are dealing with a small, boutique video label that goes that extra mile to get things right when the picture quality of their menu screens alone on their new 4K Blu-ray makes you sit up and take notice. “Holy Shit, that looks good,” you either exclaim out loud or to yourself. For the first time in your 33-year marriage, your wife looks up from her phone and can see the difference between standard definition and UHD. You pop a bottle of champagne in celebration.

The above paragraph is only a slight exaggeration. The new Arrow Video Tremors is one of the best HD transfers I have ever seen, and I have been looking at video transfers since I worked at Columbia Pictures Videocassettes in 1981. That’s before some of you were even borned. (Now get off my lawn!) Arrow continues to offer transfer work on par with the Criterion Collection, and their new version of Tremors joins Second Sight’s new version of Dawn of the Dead as Discs of the Year. 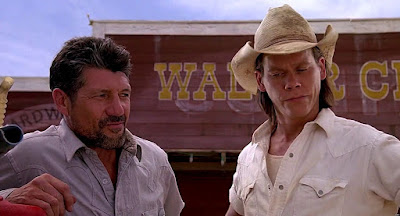 The Plot in Brief: Valentine McKee (Kevin Bacon) and Earl Bassett (Fred Ward) are two “jacks of all trades” in the small town of Perfection, Nevada (Population 14). They haul things in Earl’s truck, put up fences, and empty septic tanks. One day they notice that something is not quite right under the desert sands. The threat grows and worsens, eventually involving survivalists Burt and Heather Gummer (Michael Gross and Reba McEntire) wily diner entrepreneur Walter Chang (Victor Wong), college research intern Rhonda LeBeck (Finn Carter), and even that little girl from Jurassic Park, Ariana Richards! Could there be enormous, homicidal, subterranean worms living under the sand, capable of moving with incredible speed? If so, are they… hungry?

Tremors is 96 minutes long—the perfect length for a film like Tremors.

Tremors is so much fun that I am assuming that a majority of my readers have seen it.

It is one of the few films besides Abbott & Costello Meet Frankenstein to so adeptly mix comedy and scares. This is the rare beloved film in which everything works. Though I have seen this film at least five times, there are two particular jump scares THAT STILL GET ME EVERYTIME. The funny stuff works great. At one point Fred Ward wonders if the film’s menace is common knowledge that he somehow missed. Kevin Bacon retorts, “Oh, sure Earl. Everyone knows about them, we just didn't tell YOU.”

NOTE TO FRIENDS AND FAMILY: if you all know giant subterranean sand worms are real, NOW IS THE TIME TO TELL ME. (#DuneMovie 2021) 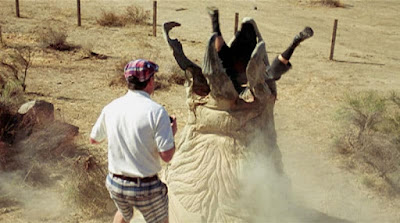 Extras on this new release are plentiful and split between a standard Blu-ray disc and the 4K Blu-ray disc. This is terrific, as some of the featurettes are presented in 4K. Featurettes, interviews, and commentary tracks cover every aspect of production. Paper extras include a two-sided poster, a Walter Chang business card, miniature reproductions of the original lobby cards, and a faux “Welcome to Perfection” city limits sign.

Several cast and crew members on the included “making of” documentary point out that, in its initial theatrical run, Tremors was not a financial success. It was only the rise of home video and the popularity of Tremors’ various video incarnations that lead to the film being held in the high esteem it is today. I think this often happens with films that are particularly good; it’s difficult to take in the full breadth of their achievement in a single viewing. Again and again, we’ve seen the same pattern: The Wizard of Oz becomes beloved only after yearly CBS screenings; It’s A Wonderful Life slips into the public domain and is then shown eighteen times a day on America’s UHF stations in the month of December for ten years because it’s free, leading to people finally recognizing it as Capra’s masterpiece; and Blade Runner, which is so dense with ideas and ran so against the grain in what constituted popular entertainment the year it was released that it took more than twenty years for filmgoers to catch up. 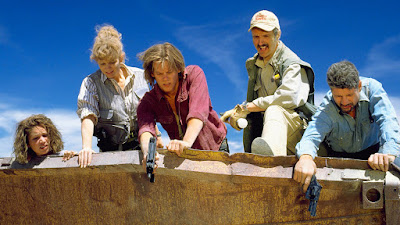 Tremors' disappointing initial box office may speak to a poor marketing campaign rather than the quality of what was being sold. As one of the producers points out, “It’s very easy to sell comedy; it’s very easy to sell horror. It’s not so easy when the film has both.”