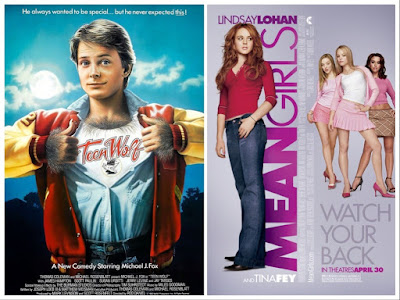 “I just wanna say that you're all winners... and I could not be happier this school year is ending.” – Principal Duval

While watching movies about teenagers, I'm always reminded how I'd rather eat a bucketful of glass shards than be a teenager again. Luckily, that never takes away the enjoyment I get when watching movies from the John Hughes portfolio, any number of teen sex comedies from the '70s and '80s, or the Apatow-inspired dramadies that dominated the previous decade. If it follows the formula created in the '70s, chances are I'll find some entertainment value in the movie.

We open with a movie that hearkens back to writer/producer Herman Cohen. The monster movie cycle was on its way out and Cohen was desperately trying to cash in on the craze making a plea to teenagers at the drive-in with two movies released in 1957: I Was a Teenage Werewolf and I Was a Teenage Frankenstein, followed by their meta offspring How to Make a Monster the following year. Along with Back to the Future, Teen Wolf gave star power to young Michael J. Fox, making 1985 one of the biggest years ever for any one actor. 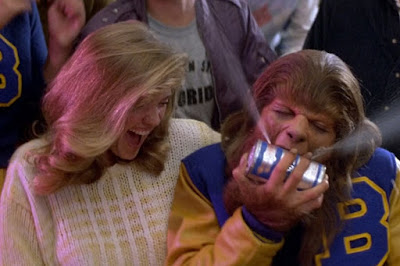 I won't recount the plot of Teen Wolf because chances are, if you're reading F This Movie!, you've seen it. Teen Wolf was a staple of my childhood. Having not seen it in 20 years, though, I'd like to point out some things I noticed as an adult.

1. Teen Wolf is the sweatiest movie I've ever seen. The movie opens with a high school basketball game between The Beavers and The Dragons. Scott (Fox) is fouled and sent to the free throw line. We watch in horror (in the most egregious use of slow motion ever used in cinema) as Scott bounces the ball and lines up his shot, looking like he just stepped out of a swimming pool. The sweat pours (IN SLOW MOTION!) from his body. Director Rod Daniel does a superb job at forcing the audience to actually smell how rancid these teenagers are in the locker room scenes just by looking at a moving picture.

2. This movie is PG. The PG-13 rating had been introduced the year before, so why no 13? I hear at least one “fuck,” and you get side boob from Pamela (Lorie Griffin). Not that I care, but I just found that to be interesting.

3. Is Mick (Mark Arnold) really a bad guy? Scott's the asshole. He's the one cheating at basketball. He's the one pushing his friends away for the more popular ones. Sure, Mick throws the first punch, but Scott had it coming. I'm Team Mick on this one.

Teen Wolf holds up in my opinion. I'm not a big sports movie guy, but you have to be dead inside if you don't get just a little pumped up during a final game sequence in a sports movie. Boof is hot, Stiles has cool shirts, and Coach Finstock is one of the greatest characters that has ever been written.

We follow an '80s movie that threw back to the '50s with a '00s movies that throws back to the '80s. Mean Girls is... not as funny as I thought it was unfortunately. Don't get me wrong, there are some gut-busting moments (any time Tim Meadows is on screen, the name Gretchen Weiners, “Your mom's chest hair!” or “I can't help it if I've got a heavy flow and a wide-set vagina,” or “I'm sorry I laughed at you that time you got diarrhea at Barnes & Nobles”). But maybe because I'm old the laughs and cringes were spread out equally. The laughs are worth it, though.

Again, I won't recount the plot of a movie nearly everyone reading this has seen, but I appreciate that Mean Girls (and Teen Wolf, for that matter) follows the formula of movies released decades before. 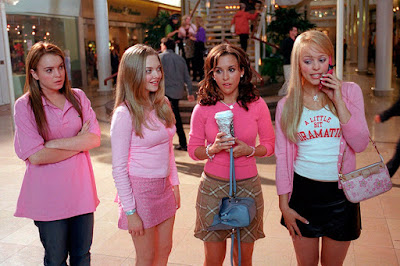 Silly comedies following formulas we know and love act as comfort food mid-pandemic. Mean Girls doesn't push boundaries (although it tries sometimes, and I cringe), it's not thought-provoking, and it doesn't break new cinematic ground. It does, though offer some truly hysterical moments. We get to see how Rachel McAdams became a star (2004 was also a huge year for McAdams: Mean Girls and The Notebook). We get to see Amanda Seyfried in her first movie role (a hysterical, albeit overplayed character). It's a favorite for many for a reason.

Both movies end in typical, cheesy fashion. Scott wins the big game, and Kady is friends with everyone. But we can glean some excellent advice from these types of movies. As Coach Finstock says, “There are three rules that I live by: never get less than twelve hours sleep; never play cards with a guy who has the same first name as a city; and never get involved with a woman with a tattoo of a dagger on her body. Now you stick to that, and everything else is cream cheese.”
Posted by Patrick Bromley at 5:00 AM