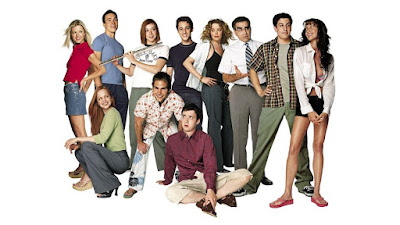 • Best Scene/Moment (tie): All the stuff with the walkie talkies signals getting crossed in the make-out scene culminating in that dad extra yelling “I’M NOT HUNGRY!” is still funny. I also really like the moment when Jim’s (Jason Biggs) dad (Eugene Levy) drops him off after the hospital when he glues himself to himself. They share a sweet father & son bonding moment and the scene ends with Levy telling Biggs “Don’t forget your penis cream.”

• Best Food: The hot dogs at Dog Years, the restaurant shown near the beginning of the movie. My only gripe is that it looks like the guys (Jason Biggs, Chris Klein, Thomas Ian Nicholas and Eddie Kaye Thomas) are eating plain hot dogs. I’m sort of jealous because the first time they put some toppings on those bad boys it’s going to blow their minds. Here’s to the next step!

• Best Song: There’s some solid contenders in this category including “Fat Lip” by Sum 41 and Blink-182’s “Everytime I Look For You,” but I’m going with a song that’s in the movie but criminally not on the soundtrack – “Everywhere” by Michelle Branch. This song makes me feel like shit’s possible, you know what I’m sayin’? It’s better than most movies. I love Michelle Branch and that era (era) of emo girl singers. Rob and I talk about this trend in music at least once every six months.

• Best Merch Available on eBay Right Now: “Very Rare American Pie 2 Cast Display Promo Standee STARZ Cable Channel” for $149.99. This standee is aesthetically pleasing. It also makes American Pie 2 look like a new NBC Saturday morning series a la Saved by the Bell. Did you know Starz was #1 in new hit movies? I have it on good authority that they were. 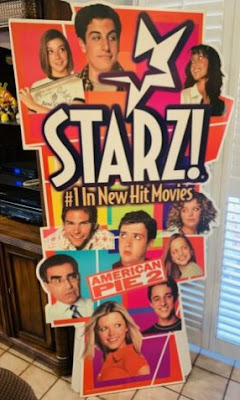 • Director Check: American Pie 2 was directed by J.B. Rogers, who acted as second unit director on the original American Pie. He also directed 2001’s Say It Isn’t So starring Heather Graham and Pie 2’s own Chris Klein. These were Rogers’s only theatrical features, from what I can tell, though he did later direct The Pool Boys and Demoted. He’s also gone on to assistant director duties on many Farrelly Brothers projects, including The Heartbreak Kid, Hall Pass, The Three Stooges, Dumb and Dumber To, and Green Book. Here’s to the next step!

• Year 2001 Movies to Trailer Before It: Legally Blonde, Not Another Teen Movie, Out Cold

I’m happy Roger Ebert and Richard Roeper liked American Pie 2 as much as I did back in 2001. Also, to Ebert’s point about wanting a girl version of American Pie (which he calls American Cake), there was a movie called American Pie Presents: Girls’ Rules released in 2020 so his wish did eventually come true. In honor of Roger Ebert, Rob and I will be reviewing Girls’ Rules next month for our Reserved Seating column. Here’s to the next step!

• Mall Movie? Movies like American Pie 2 are why mall theaters were built.

• Only in 2001: The whole Petey bit where Jason Biggs is mistaken for having a developmental disability. Film Twitter would be ablaze today. 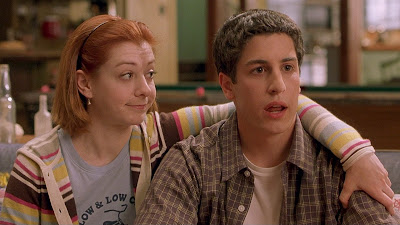 • Scene Stealer (tie): Eugene Levy and the guy playing Tara Reid’s date at the party. Everything he does cracks me up. He’s like a British Billy Zane.

• I Don’t Miss: Binge drinking every weekend. Here’s to the next step! 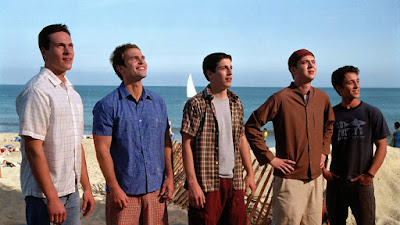 • What I Thought in 2001: I loved the first two American Pie movies when they were released. I was the same age as the characters in the movie, so it all lined up until 2003’s American Wedding when I was like “Slow down. I’m not ready to get married yet.” These were among my high school/college movies like how the John Hughes films were for others. After the original American Pie, I awaited American Pie 2 with MANT! level anticipation.

• What I Think in 2021: American Pie 2 at age 38 was weirder than I thought it would be. I don’t often feel old but watching this again really hammered home that I’m not young anymore. The good news is AP2 is still funny and sweet. It’s a rare comedy sequel that works. Here’s to the next step!
Posted by Patrick Bromley at 5:00 AM