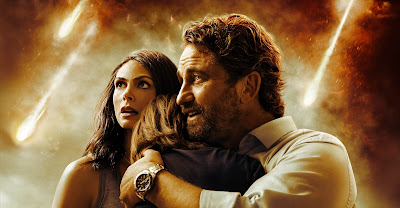 The Sky Has Fallen. 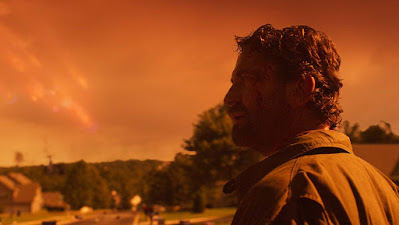 Originally slated for US theatrical release but bumped to VOD due to the COVID-19 pandemic, Greenland is the story of John Garrity (Gerard Butler), an engineer hoping to repair his fractured marriage to Allison (Morena Baccarin). Putting on a brave face for their son (Roger Dale Floyd as Nathan), the awkward pair decide to host the neighbors for a backyard barbecue celebrating the impending arrival of Clarke, an interstellar comet that NASA predicts will pass closer to Earth than any celestial body in history. Though the media assures everyone that Clarke poses no real danger, John receives sudden instructions from Homeland Security to pack up his family and head for shelter.

It turns out, of course, that Clarke — revealed to be a series of small comet fragments traveling together — actually presents an extinction-level threat to the entire planet. John’s engineering skills have reserved him and his family spots in one of the US government’s classified bunkers, news that his neighbors take particularly badly when they learn they have not been given the same opportunity for survival. As the sky falls around them, the Garritys head for their designated pickup point, where they are issued credentials and await salvation. This is a disaster movie, though, so twists of fate soon scatter the three in separate locations, stripped of communications, supplies, and hope.

It’s here that Greenland really picks up steam. Making the most of its $35 million budget, the film forgoes gaudy spectacle in exchange for ground-level human drama. There’s a middle half-hour in which our heroes scramble desperately for the most incidental things — a second of cell phone service, a single insulin ration — and each hunt is contrasted nicely against the global catastrophe unfolding around them. Chris Sparling’s screenplay is rightly critical of institutions while preserving the essential decency of the individual human beings who make them up. In the end, the Garritys’ only chances lay with a select few sympathetic enough to help. 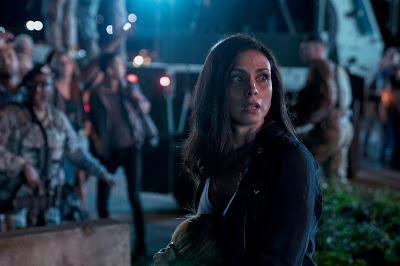 That doesn’t mean that Greenland shies away from showing humanity at its worst, however. The Garritys are constantly navigating their way through looting mobs of violent opportunists and facing cold rejection from the technology and infrastructure supposedly designed to support them. One particular bit of Parent Terror finds Allison in the clutches of a couple (Dave Denman and Hope Davis) who plot to kidnap Nathan and pose as his parents to obtain passage on a military aircraft. Though not given a ton of character latitude, Baccarin sells the true despair of these moments, and Waugh frequently leaves us with no idea what will happen next.

Fun as it is to be enthralled by Greenland’s twists and turns, they do give way to some threadbare connective tissue in the back half, moments in which welcome cameos from the likes of Scott Glenn and Holt McCallany feel short-changed, trampled under the narrative shoe leather necessary to get the family to the titular promised land. Time given to some of these smaller set pieces might have been better spent on more character progression, as John and Allison’s marriage subplot is resolved with a shrug and without much of a change in their dynamic. These are forgivable sins and par for the course in terms of genre tropes, but a bit more depth there would have been nice. 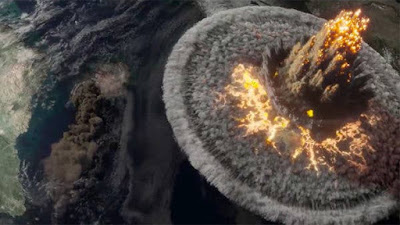 There are other quibbles, of course, such as Greenland’s Multiple Ending Syndrome and an occasional cheap kitschiness of effects that pulls us out of the film’s reality, but even those stray bits of contention add to its B-movie charm. Gerard Butler feels right at home with the Action Dad archetype (even more so here because he’s allowed to use his native Scottish accent), and he seems primed to carve out a solid DTV leading man career alongside Liam Neeson and Nicolas Cage. If 2020 was a year of abject horrors, Greenland is an unexpected gift, a Redbox-y War of the Worlds that, in any other era (era), would have made for box office gold.
Posted by Patrick Bromley at 5:00 AM