Movies is Good: The COLUMBO Game

The other night, I discovered something devilish.

I was idly channel surfing, when I noticed that the Sundance Channel had started airing episodes of Columbo, one of my favorite television programs of all time. Don’t ask me why I clicked on it; I could have opted instead to stream it for free on imdb.tv, YouTube, or Peacock, or I could have trudged upstairs to grab my 37 DVD Complete Series DVD set. It was two in the morning, and I wanted a quick fix of my sweet, sweet Columbo.

What I saw appalled me. The episode was so sped up (“time compressed” is the official term) that it seemed like some sort of herky-jerky puppet show populated by chipmunks. I was familiar with the episode in question (Season 5, Episode 5: “Now You See Him”) but I had never seen or heard it like this. 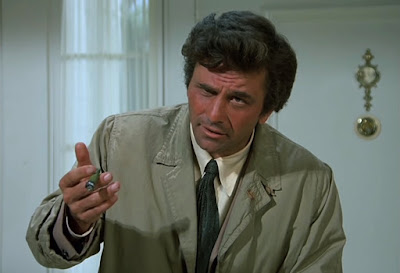 TANGENT: The fun of any Columbo episode is that it starts by showing us the murderer. The success of any Columbo episode is directly related to the level of hubris in that murderer. Actors showing the most hubris and contempt were invited back on the show multiple times. (Robert Culp and Jack Cassidy were each on the show three times, for example, playing three different murderers! In fact, that’s where we get the word “culpability”, which means of course, “the ability to murder.”)

And I don’t have to remind everyone of what a great actor Peter Falk was, do I? Though typecast as a rumpled police detective for the rest of his life, he gave memorable performances in John Cassavetes’ Husbands, Blake Edwards’ The Great Race, and Wim Wenders’ Wings of Desire. I’m guessing most of my readers remember him as the warm-hearted Grampa in Rob Reiner’s The Princess Bride. 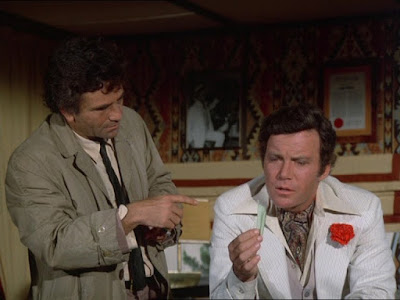 BACK TO THE COLUMN: I wasn’t surprised by this devious trickery. I know that time compression is popular in syndication; it makes more room for commercials (These pre-lubricated catheters aren’t just going to sell themselves, you know.) I just didn’t realize it was being done in such an obvious, craven, ham-fisted way. Characters ran down hallways where they usually sashayed and sped safely around curves in defiance of the laws of physics. All the characters talked like they were in a 1930s screwball comedy—or as if they had made a side bet on how fast they could make it to the end of the episode. It was weird.

OOPS, ANOTHER TANGENT: This is the problem when most shows in the 1960s and ’70s had five minutes of commercials per half hour, while contemporary shows have NINE. Think about that. The average episode of The Dick Van Dyke Show was 25 minutes; the average length of 30 Rock was 21 minutes. That means that ten Dick Van Dykes are equal to almost twelve 30 Rocks. Dick Van Dyke ran for five seasons and 158 episodes (totaling 65 hours, 50 minutes of show). 30 Rock ran for seven seasons and 138 episodes (which is about 48 hours, 18 minutes of show). Not only were Van Dyke’s episodes longer, those seasons averaged more than 30 episodes each, while 30 Rock’s seasons ranged from 13 – 23 episodes. You can understand why the writers and actors on Dick Van Dyke were reportedly exhausted after five seasons. In those five years, they had written and performed the equivalent of nine and half seasons of 30 Rock! That’s inflation. 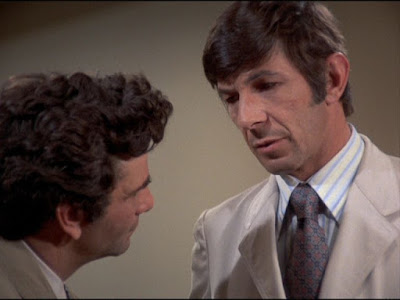 I have read that the Hallmark Mystery Channel solved the “more commercials” dilemma on Columbo by simply editing out scenes in every episode they deemed unimportant. The free version of the Peacock streaming service, on the other hand, neither edits nor time compresses Columbo, and places a single commercial break between the murder and the introduction of the detective in every episode.

HERE’S WHERE THE GAME COMES IN: Tomorrow morning at 1:00AM, The Sundance Channel is going to air Season 6, Episode 1 of Columbo, “Fade in to Murder,” starring William Shatner. That episode runs 1:13:22, and the Sundance folks have placed it in a 1:45 minute time slot. That’s 32 minutes of commercials even if they just left the goddamn episode alone. But I suspect they will not leave the episode alone; I am guessing that we will see another super-speed, cartoonish charade. So here is what I need you to do:

1. Stay up until 1:00 AM. That can’t be hard. Who sleeps anymore?
2. Tune in to The Sundance Channel, the bastards.
3. Simultaneously, call up Peacock on your phone, tablet, or laptop.
4. Find Columbo, Season 6, Episode 1: “Fade in to Murder” on Peacock.
5. When The Sundance Channel charade begin, press “Play” on the Peacock.
6. Enjoy the murder stylings of William Shatner and the sexy insouciance of the hardest-working, smartest detective on the LA police force. 7. Compare. Gasp. Take something for your headache. I’m guessing The Sundance Channel will quickly “lap” the Peacock version, running 20% faster or more.

Don’t forget to pause the Peacock version whenever The Sundance Channel breaks for ITS MORE THAN 30 TOTAL MINUTES OF COMMERCIALS. 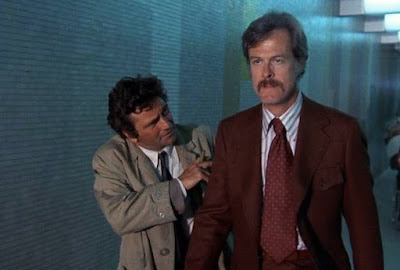 OH, SIR? JUST ONE MORE THING…: This is how, in the world of entertainment, Capitalism kills itself. Little by little, we add more commercials. We shorten the program. We speed up the program. We degrade the program. We forget that we are here for the program, not just to sell more boner pills and non-stick frying pans. We begin to suspect that the commercial comes first and the program comes second, or third, or not at all. Some exasperated Columbo fan on a Columbo fan site said the number of commercials on some stations turned each Columbo episode into an endless informercial... with occasional pauses for Columbo.