When I was attending college back in the days before air-conditioning and ice cubes, I was lucky enough to take a film class titled “The Hollywood Social Problem Film” with professor David Desser. One unit of the class dealt with Anti-Semitism and featured screenings of Gentleman’s Agreement and Crossfire. Dr. Desser was an ideal choice to teach this unit because he would later publish (with Lester Friedman) American Jewish Filmmakers, the definitive book on that subject. I learned a lot in his class. I was something of a naïve, sheltered suburban boy entering college, and the class helped to open my eyes to certain unsavory realities of our country. (For instance, I learned the private beach club my parents belonged to in the 1960s and ’70s was restricted.) Dr. Desser carefully curated every film screened in that class, and it was in that context that I first saw Crossfire. Thanks, Dave. 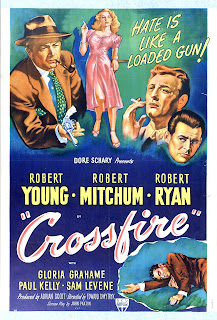 The Plot in Brief: Police Detective Finlay (Robert Young) investigates a murder, apparently committed by young GI Mitchell (George Cooper) who doesn’t seem like a murderer and lacks a motive. Mitchell’s buddy Keeley (Robert Mitchum) is older, wiser, and does his best to keep Mitchell hidden while Finlay sorts everything out. The night of the murder, Mitchell went to the victim’s apartment with two fellow soldiers, Montgomery (Robert Ryan) and Floyd (Steve Brodie). Could one of those two have committed the crime? What would anyone’s motive be for killing a stranger?

Crossfire is an amazing film that does six or seven things at the same time and does all of them well. That is why I am so thankful for Warner Archive’s recent Blu-ray upgrade. The film looks amazing, with contrast that shows off the film’s moody, expressionistic lighting schemes. Crossfire is a seminal film noir and a seminal low-budget film. The sets all look half-finished and in-progress, which underlines the film’s theme of rebuilding a life after the war.

Crossfire is an actor’s showcase: Robert Young, Robert Mitchum, Robert Ryan, Sam Levene, and Gloria Grahame all turn in some of the most impressive work of their careers. Grahame was nominated for a Best Supporting Actress Academy Award; other nominations included Robert Ryan for Best Supporting Actor, Edward Dmytryk for Best Director, John Paxton for Best Screenplay, and the film for Best Picture. It won none of these. 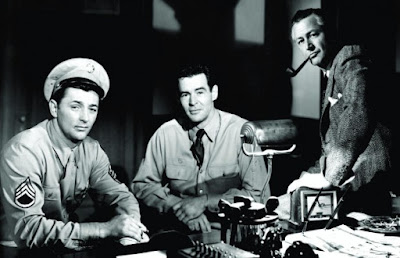 What I love about the film is its pervasive mood of utter despair. These servicemen, newly home from the war, are shell-shocked and despairing. They wonder if it is even worth it to begin again. Keeley tells Finlay that he hasn’t seen his wife in two years, adding “I don’t know if I’ll ever get home.” Every character is lost in a dark, empty void and lacks the direction or resources to find the way out. Mitchell meets Gloria Grahame’s Ginny in a dance hall. Though he is honest about being married, she invites him back to her apartment anyway. He arrives first, and is greeted by Ginny’s husband, who emotionlessly assures Mitchell that she wants nothing to do with him anymore—he just can’t stay away. The character, identified only as “The Man,” cheerlessly informs Mitchell, “She was a tramp when I married her. I didn't know it at first, but I knew it before we were married. That's one of the reasons I enlisted—to get away from her. But I couldn't wait to get out and come back to her. When I did, she didn't want me. Funny, isn't it? But I still want her. I still love her.” Characters wander around in a daze, drunk, lonely, unloved, and lost. It’s one of the bleakest films I have ever seen.

Crossfire is famous for being one of the first American films to tackle the subject of Anti-Semitism. Key to the film’s murder investigation plot is the fact that one of the characters hates all Jews. The film is very clear about how stupid and un-American these feelings are. Detective Finlay gives several characters mini-civics lessons under the guise of questioning them and solving the crime. He theorizes, “The motive had to be inside the killer himself. Something he brought with him. Something he'd been nursing for a long time. Something that had been waiting. The killer had to be someone who could hate [the victim] without knowing him. Who could hate him enough to kill him, under the right circumstances, not for any real reason, but mistakenly and ignorantly.” 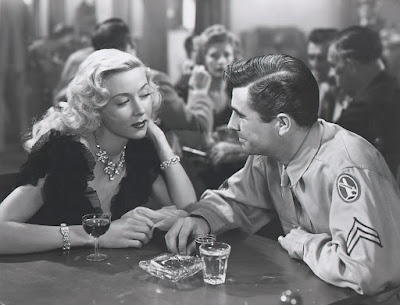 At another point in the story, Finley lectures a GI from Tennessee: “This business of hating Jews comes in a lot of different sizes. There's the ‘You can't join our country club’ kind and ‘You can't live around here’ kind. Yes, and the ‘You can't work here’ kind. And because we stand for all of those, we get [the killer’s] kind. He's just one guy; we don't get him very often, but he grows out of all the rest.”

I was watching the film last week, in the wake of the horrifying Atlanta shootings, and it made me wonder if Americans will ever wake up to this scourge. Substitute one race or religion or minority for another and it just happens again and again in an endless, nihilistic spiral. Crossfire was made 74 years ago, but what it has to say about hate is still trenchant, still timely, still tragic.
Posted by Patrick Bromley at 5:00 AM