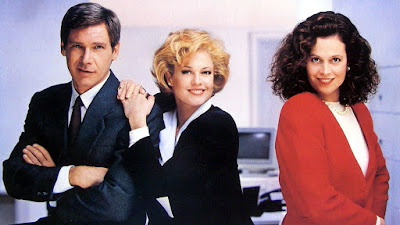 I was about 26—only a few years younger than Melanie Griffith’s titular character Tess McGill—when I hung a framed poster for Working Girl in my first real office. I loved the movie because at the time I saw a bit of myself in Tess: a young woman who wanted a chance to do her best, to be trusted to handle more than answering the phones and sorting the mail, to not be constrained by the impediment of my unfortunate gender. My own little office meant that I’d moved up from “Publications Assistant” to “Assistant Editor.” All I had to do now was wait for Harrison Ford to show up and respect my intelligence.

THE PLOT IN BRIEF: A young woman from Staten Island has a job in New York City. She wants a better job, so she goes to night school and earns a degree and has ideas about things and tells people her ideas. That doesn’t seem to work, because sexism and classism and hairstyles. She figures out another way to shoot her shot, career-wise. There are consequences. 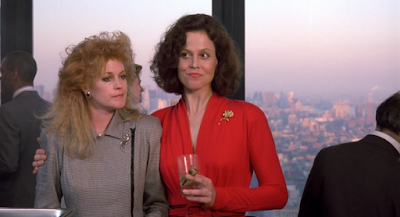 All movies are products of their time, but Working Girl leans HARD into 1988. It’s more than just aesthetics—although there’s plenty of big hair, shoulder pads, and white-socks-and-sneakers-with-nylons. HISTORICAL PAUSE FOR READERS UNDER 45: That really was a thing we had to do! Women wore heels in the office, because it was “important” to look “professional,” so we’d need to carry our heels in a bag if it was raining or snowing or we had to walk more than a block. Even then, I did not understand the “corporate dress code.” Who cares what kind of shoes I’m wearing? My feet are under the desk the WHOLE TIME. In the 1980s, I was reprimanded more than once, at more than one workplace, for wearing PANTS. Yes, technically we were allowed to wear pants, but I was taking advantage of that loophole by almost always wearing pants. (I was clearly a trouble maker.)

More than the fashions, Working Girl captures what it felt like in 1988. I’d almost forgotten how rigid the rules seemed, how high the walls between genders and classes. The movie doesn’t hammer at its feminist messages, like 1980’s 9 to 5; Tess lives those messages as part of her larger life. Her line “I’m not going to spend the rest of my life working my ass off and getting nowhere just because I followed rules I had nothing to do with setting up” isn’t shouted from the top of her desk. Tess says it in frustration to her best friend Cynthia, who is warning Tess that she’s ruining her life by pushing some boundaries to achieve her dream of career advancement. Cyn is frustrated and hurt that what’s good enough for her—marriage, kids, a low-level job – is somehow not enough for Tess.

Yes, the plot revolves around deception, but notice that Tess never really lies (unlike many of the men around her.) Her ideas and acumen are all her own. She never gives a false name or title. She doesn’t pretend to be someone else, exactly; she merely “pretends” that she has the right to be “in the room when it happens” and to be her best self: the hard-working, educated, determined young woman she sees in the mirror, not the Staten Island secretary everyone else sees. “I have a head for business and a bod for sin,” Tess tells a handsome broker (Harrison Ford as Jack Trainer) she meets at a corporate party. “Is there anything wrong with that?” 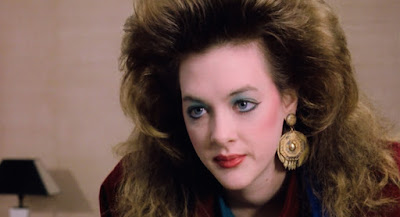 Working Girl shines with terrific performances from Griffith; Sigourney Weaver as Tess’s condescending, uber-corporate boss, Katherine; and a very funny Joan Cusack as highly-haired best friend Cyn. Griffith, Weaver, and Cusack all earned Oscar nominations, as did director Mike Nichols; the film itself was up for Best Picture (it lost to Rain Man.) Ford’s really good too, much lighter than the blockbuster star who’d played Han Solo and Indiana Jones. His self-effacing bow to coworkers after he changes his shirt in a glass-walled office shows us Trainer doesn’t take himself too seriously—but we love how seriously he takes Tess. Alec Baldwin shows up as Tess’s Wrong Guy boyfriend, and Kevin Spacey makes an appearance as—surprise!—a creep.

Spoilers for anyone who hasn’t already seen Working Girl: there’s a happy ending. When Jack swoops in at Tess’s moment of humiliation, we’re expecting him to rescue her, white knight style. Fortunately, true to the film’s respect for Tess and her ambitions, he doesn’t. A door of opportunity opens, and he helps push her through, but Tess lands the Big Deal herself. “She got out!” Cyn shouts—yes, from atop her desk—to the cheering secretarial pool.

Fast forward a bit, and Jack and Tess are sweetly sharing a piece of toast as he packs her a lunch for her first day at a new job. When she gets there, she’s delighted to learn she finally has her own office. Then the camera pulls back from that tiny office window… pulls back to show more windows, stacked row upon row, then back further… there are walls of windows, giant buildings made of windows, Carly Simon singing on the soundtrack about “the New Jerusalem” as the camera pulls farther away and Tess’s tiny office window becomes one of ten thousand. “It’s like the ending of Raiders,” I said to my husband, watching Tess and her triumph being warehoused into anonymity.

That’s something else that Working Girl captures about 1988: the underlying sadness of the corporate mentality that had been dominating America’s social imagination since the beginning of the decade. By 1988, the big screen was already leaning toward stories that pushed back against that narrative; Wall Street’s Gordon Gecko had gotten his comeuppance the year before, and on Saturday we’ll see what John Carpenter had to say about corporate dominance in They Live. 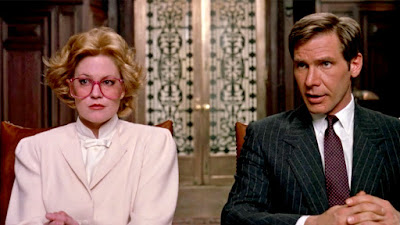 The bosses I had in 1988 who would comment, “Oh look, she has legs!” every time I wore a skirt should see me now, working from my home office (even before the pandemic): my title is Editorial Director and I wear whatever the fuck I want. I felt a tiny touch of PTSD reliving the 1988 workplace through Working Girl, and I think Mike Nichols knew exactly what he was doing with that final shot. The real “happy ending” of Working Girl isn’t the little office Tess can finally call her own: it’s the toast, shared comfortably with someone who trusts her, respects her, and is happy to support her goals. I don’t think Tess knows that yet… but she’s smart. She’ll figure it out.
Posted by Patrick Bromley at 12:00 PM