Songs in the Key of F! 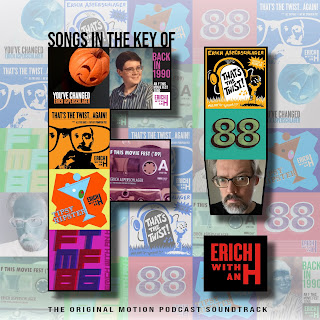 I first met Patrick Bromley in a club called the Electric Banana. Don’t bother looking for it. It’s not there anymore.
Wait, did I say “a club called the Electric Banana”? I meant “a movie review website called DVD Verdict.” Sadly, it’s not there anymore either. I tried my hand at writing reviews of DVDs and Blu-rays of varying lengths and quality. It went fine, but I knew it wasn’t “my thing.” Reading Patrick’s reviews, I could tell it was his. He spun that passion for movies into the website you are on right now. I came along for the ride, running behind the train, hopping on long enough to record the odd podcast or to write the odder post, then jumping off again so I could take a closer look at a particularly interesting cloud I'd noticed.

As much as I love watching movies, writing about them isn’t my thing. I wasn’t sure what my "thing" was until I got back into playing guitar and decided to write a song for F This Movie’s 400th episode. I’d done some other goofy recordings for the site, but that song gave me the confidence to write more songs. So I did. In the past five-ish years I’ve written over a hundred songs, some of which are good, and many of which I play at local wineries, breweries, and speakeasies around the Finger Lakes in New York. I’ve also continued to write songs for F This Movie! No matter how much I’m struggling with ideas for songs, it’s never hard to write a new tune for this site. I've known for a while that I wanted to gather those songs together in a collection and release them as an album, but I never felt like I had enough. Until now. “Songs in the Key of F!” (“The Original Motion Podcast Soundtrack”) is my tribute to this community, to movies in general, and to the amazing times I’ve had interacting with both.

So here you have it, my admittedly self-indulgent contribution to 1988 week here at F This Movie!: a track-by-track tour of the album, which will absolutely be repurposed as liner notes over on Bandcamp. Because as much as I love replaying the same guitar part 23 times to get it just right, I try not to work that hard in other areas of life.

I decided to put the F This Movie Fest songs in order by theme year instead of the order I wrote them, in part so this could be the opening track. It rocks. It bops. It covers the fest as well as the movies and still has time for a ripping guitar solo (recorded, as all of my rocking guitar solos are, by running my acoustic through a virtual pedal because I’m too lazy to restring the electric guitar I bought to record songs just like this). It’s the first song production I felt really good about, and it holds up. Releasing it was doubly special, because it came out just before I flew out to Chicago to take part in the fest for the first time.

An album’s opener should set the tone, but I’d argue that track two is where you should put your best song. I’m not sure if this is my best, but it certainly is the most recent. This is the song for this year’s fest, and I’m very proud of how it came together. Like last year’s song (which we’ll talk about in a bit because this album is constructed like a pretentious non-chronological ‘90s indie film), I wanted to focus in equal parts on life as it is now as well as the year we’d be looking back on. Little did I know last year what the coming year would bring. In retrospect, I should have suspected. My trip to Chicago for F This Movie Fest 2020 was the last thing I did before we went into lockdown. Almost literally. I came home on Monday, and by the end of the week my daughters were learning remotely and I haven’t left the house since. It’s been rightly pointed out that an all-Twitter film festival is tailor-made for these end times. It’s perfect not just because we’re all watching movies at home anyway, but because it connects us in ways we haven’t been able to connect this past year. I’m not going to Chicago this year, but I’ll still be right there with everyone because that’s what F This Movie Fest is all about. At least, that’s what my song says.

I didn’t write this song for F This Movie Fest, but I did write it immediately after F This Movie Fest. I was sitting in JB and Jan’s kitchen at the end of a long day of movie watching and tweeting. Too wired to sleep, we chatted to wind down the day and while talking about my family I said my daughter was “tall but she doesn’t play basketball.” JB said that would be a good lyric and challenged me to write the song. I took the challenge seriously, and by breakfast time the next morning I sat in their living room and played them this nearly finished song. I think that’s called a songble brag?

Here we go. My first proper F This Movie Fest song, and it’s a doozy. I decided to write a full verse about each of the movies. On those merits it’s a success, but its ambition is matched only by its duration. Fun fact: I had the idea to ask everyone from the site to record themselves singing the “la la las” at the end so I could add them in as a closing chorus. Everyone graciously did so. Only then I realized it didn’t work at all, no matter how well everyone sang or how gracious they were. Frankly, I’m lucky they invited me to come out to Chicago at all.

Buoyed by the “success” of the 400th episode song I wrote over the summer of whatever year it was I recorded it, I decided to write a song or two for Scary Movie Month. I put the most work into a song we’ll get to later in the album (I know, another non-chronological tease), but the B-side was this tune. It’s an ‘80s alt-style rocker written from the perspective of someone who runs into a friend on a foggy night and knows something’s not right but can’t quite put their finger on the fact that their pal has changed into a werewolf. I like this song a lot. I play an acoustic version of it at my shows when the crowd seems open to lycanthropy.

This is last year’s song, recorded pre-pandemic. When I wrote the lyric about the end “drawing near” I didn’t know what was coming. (Funny how a general, pervasive sense of dread works for any occasion.) I wanted to take a different musical approach from my first two fest songs, highlighting the acoustic guitar I use to write and perform almost all of my music. I thought maybe that would make it easier to record and mix. It didn’t, but I like how it turned out.

Everyone remembers the last movie they saw in the theater before the pandemic. Mine was a 70mm showing of the Schwarzenegger classic Last Action Hero at the storied Music Box Theater in downtown Chicago. It was a miserable experience. Turns out, hip urban youths aren’t interested in appreciating movies made before they were born so much as they are eager to laugh at things that aren’t meant to be funny. We had a particularly choice duo seated directly behind us. Liquored up and too cool for school, they would have ruined the night if they hadn’t accidentally inspired me to write this song. Joke’s on them.

I love horror and sci-fi anthologies. When I was younger, I wrote a series of twist-ending short stories. I’ve sketched out a bunch of anthology segment ideas, always meaning to turn them into stories, or podcasts, or whatever, but nothing ever came of it until this song. Three verses, each its own horror story, each chorus the twist ending of that story. I enjoyed this song so much, I decided to make it a trilogy. I recorded the second part, “That’s the Twist...Again!” a year later and released it on a standalone EP, and wrote the conclusion a year after that. I never quite got around to recording “That Was the Twist,” but I assure you it exists and maybe someday you will hear it. Probably. Maybe.

My My (Pumpkin Pie)

It seemed a bit much to include all the songs from my Halloween EP on this album, especially since I plan to one day record a full album’s worth of spooky tunes, but I’m representing it here with this fun ditty about one man’s (me) unholy love for pumpkin pie. Sometimes songs are metaphors. This one isn’t. I just love pumpkin pie in a suggestive way.

I didn’t write this song for F This Movie!, but I did play it live during the fest podcast last year so it counts. What? Don’t look at me like that. It does!

Last but not, um, last, is the first song I wrote for F This Movie!, in honor of the 400th episode. I think of it as an unofficial theme song for the site. It’s about people who love movies, and each other, and even though I had no idea how to record songs when I recorded it, I think all that movie love comes through. I’m honored to be a part of this site, and continually thankful that Patrick and the gang have been so welcoming to me virtually and in person. Sure, this album is a cynical bid to recycle previously released material and pass it off as something new, but it’s also a love letter. A love letter to movies, and friends, and streaming revenue, and I can’t think of anything better than at least two of those three things.

(Since you made it all the way to the bottom of this post, I’ll let you in on a little secret. The streaming version of this album only includes the 11 songs I wrote about above, but if you download the Bandcamp version you get five bonus tracks that I’m calling “F This Movie! Archives.” They’re a fun bit of personal site history for me. I honestly forgot I recorded at least one of them. Enjoy!)
Listen and buy "Songs in the Key of F!" here
Posted by Patrick Bromley at 12:00 PM

Email ThisBlogThis!Share to TwitterShare to FacebookShare to Pinterest
Labels: 1988 week, movie music, songs in the key of f