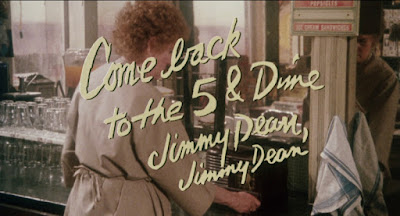 Where Sandy Dennis is the Virgin Mary to James Dean's God.

On February 8, 1982 the curtain rose at the Martin Beck Theatre (now the Al Hirschfeld Theatre) for previews of a play written by Ed Graczyk, directed by Robert Altman, and starring Karen Black, Cher, Sandy Dennis, Kathy Bates, Sudie Bond, and a young man making his Broadway debut named Mark Patton. Come Back to the 5 & Dime, Jimmy Dean, Jimmy Dean was hated – most notably Frank Rich of The New York Times. It only lasted 12 previews and 52 performances.

After the box office flop of Popeye, Robert Altman sold his production company, and unable to secure any sort of sizable financing, the writer/director/producer turned to the stage. He acquired the rights for Jimmy Dean, taking it all the way to Broadway. Around the same time, Altman directed Stravinsky's The Rake's Progress at the University of Michigan while also teaching a course on his films. But he couldn't ignore the siren calls of screens both big and small, so with what little financing he could secure Altman filmed or adapted several plays for television and film: Rattlesnake in a Cooler and Precious Blood for PBS, and Secret Honor, Streamers, and Jimmy Dean for the big screen. 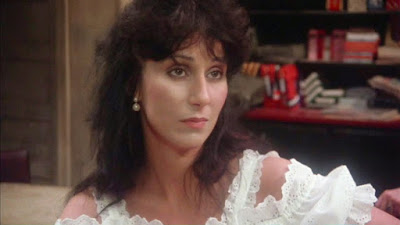 Jimmy Dean is about a group of friends reuniting on the 20th anniversary of James Dean's death. Twenty years prior, the group of young women (and one young man) started a fan club called “The Disciples of James Dean” after part of his movie Giant was filmed in the next town over. One of the Disciples won an extra role in the film and claims to have birthed Dean's only son. As the story progresses, secrets are unearthed, tempers flare, and friendships are tested.

While the story jumps back and forth from the 1950s to the 1970s, we never leave the tiny Woolworth's in the middle of a small, dusty town in Texas. Mona (Sandy Dennis) is the woman who claims to have had James Dean's child, a mentally disabled boy whom she appropriately named Jimmy Dean. Sissy (Cher) is the sexy friend who flaunts her boobs and legs with anyone who will give her the attention. Although both women had dreams of leaving their small town, neither one was able to escape, and both still work at the Woolworth's owned by Juanita (Sudie Bond), an elderly, bible-thumping woman who is in denial that her late husband was a drunk and a sexual predator. Rounding out the Disciples are Stella Mae (Kathy Bates), a lush who likes to laugh and have a good time, and Edna Louise (Marta Heflin), a downtrodden, pregnant housewife, both of whom have managed to escape the small town.

The friends catch up while we as viewers are privy to the past through beautifully-transitioned and magically-photographed flashbacks (Altman makes expert use of mirrors and windows). Enter Joanne (Karen Black). Nobody knows who she is until... well, I encourage you to watch and find out for yourself. Joanne is the wrench in the machine, for better or worse. The film is a portrait of a small town with small-minded people who don't necessarily realize their selfish and petty ways. Mark Patton (A Nightmare on Elm Street 2: Freddy's Revenge), in his first movie role, plays a young gay man and an original Disciple. But that small town abused him and drove him away. Many of the flashbacks include him, and while his youthfulness on screen shows, it's a heartbreaking portrait of someone who won't be completely included no matter how hard he tries. 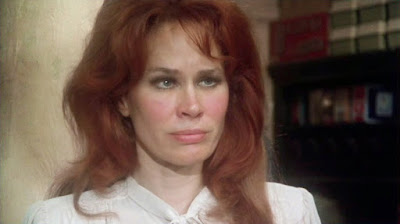 You can't help feel a sense of dread throughout the entire film. Lee Gambin points out in his commentary for the film that Jimmy Dean is a nice epilogue to the trio of female-centric genre films Altman made earlier in his career: That Cold Day in the Park (1969), Images (1972), and Three Women (1977). Sandy Dennis especially brings a frightening quality to the story. She's a woman unhinged, believing she birthed James Dean's only child and, on top of his handicap, had to raise him on her own. The stress of life and obsession over one man is breaking her. The way Dennis will let a giggle slip before falling back into her somber demeanor is truly chilling. She purposefully excludes herself, glaring at the other women having fun and reminiscing. It's in these moments we think this woman will snap and murder everyone in the room; almost as if her characters from Who's Afraid of Virginia Woolf? and The Out of Towners have had enough and are about to get their redemption.

On top of the pressure each woman feels to present herself in a way the world wants her to be, we're in a cluttered, small space with a dust storm brewing on a 118-degree day in Texas. You sweat with these women. Altman makes no effort to hide the fact that these actresses are melting on screen. Their brows drip and their chests shine with perspiration. Each time one of the ladies walks out the front door of the store she disappears into a rust-colored cloud of dust swirling around. You feel the grit between your fingers and on your teeth. You smell the smoke when Joanne lights a cigarette. You taste the Orange Crush and Lone Star. When it's over, you're left in a haze, asking yourself, “Was that real?” 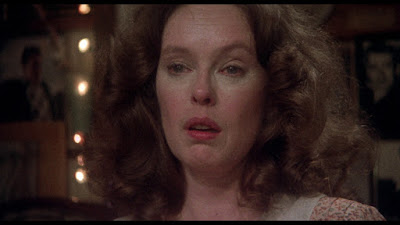 Come Back to the 5 & Dime, Jimmy Dean, Jimmy Dean is an unforgettable movie in that Altman presents a story that leaves us in a state of discomfort. Nothing is resolved. Nothing is simple. Because life isn't simple. I love Robert Altman because he's not afraid to show messy people and their messy lives and then leave those people just as they are, because that's life.
Posted by Patrick Bromley at 5:00 AM