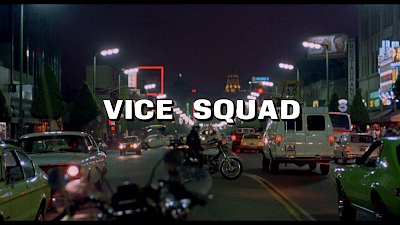 Ten years after he gave us subterranean cannibals in Death Line aka Raw Meat (1972), and one year after giving us seaside zombies in Dead & Buried (1981), writer/director Gary Sherman gave us Ramrod in Vice Squad. With crazed eyes, a ten-gallon hat, and a good ol' boy cocksure swagger, Wings Hauser is the scariest pimp you'll ever see, making Vice Squad one of the standout cop movies of the 1980s.

After beating to death one of his working girls, the hunt is on for Ramrod, led by Gary Swanson as Vice Det. Tom Walsh. Forced into an undercover role, Walsh is helped by reluctant Princess, played by Season Hubley, a mother trying to make ends meet by moonlighting as a prostitute. The opening title card claims the movie to be based on real stories provided by real Vice detectives while Wings Hauser invades our ears by singing “Neon Slime.” While it depicts some rather gruesome subject matter, this is by far one of my favorite '80s cop movies, its grit and grime making it all the more appealing. If Cruising (1980) was set in Hollywood, it might look something like Vice Squad. 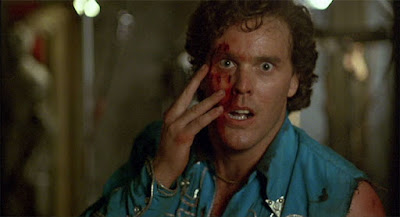 Hauser may be the most memorable character from the movie – you believe Hauser to be like Ramrod in real life – but the best performance goes to Hubley as Princess. In fact, this was the second time Hubley was cast as a prostitute, the first being Nikki in Hardcore (1979) with George C. Scott. The film opens with Hubley packing bags and getting her young daughter dressed. When it's revealed that she's sending her daughter away for a while so she can work the streets, our hearts immediately break. She's desperate. And kinky... for a price (after a John says he'd pay handsomely for a golden shower, she says, “You got yourself a date with Princess Running Water.”) The way she reacts after seeing her dead friend (played by one of MTV's original VJs, Nina Blackwood) is a punch to the gut because we know what happens next – she's going to have to go undercover to catch the sicko responsible. Hubley is then put in a scene so out of place you'd think somebody changed the channel. Princess is hired by a creepy chauffeur (played brilliantly by Michael Ensign) for a mysterious sexual encounter. She dons a lingerie version of a wedding dress and is sent into a room with an elderly gentlemen in a casket. I'll stop there, but in a movie that depicts (not graphically) vaginal mutilation, this slapstick routine is an abrupt change of pace. Still, Hubley is a force as a woman just trying to survive. 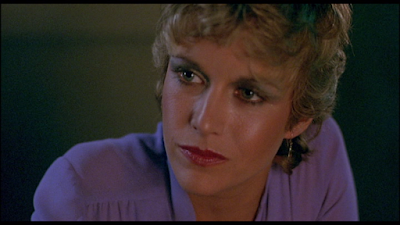 The depiction of the sex workers in Vice Squad is a refreshing change of pace. Other than Blackwood's turn as Ginger, none of the prostitutes are shown as a strung out shell of a human being covered in track marks. These are smart women who work on their own and look out for each other. They weren't forced into it. This is their job, and they meet up for a drink in the neighborhood bar during their breaks.

Gary Swanson, as the lead detective, gives a fine if uneven performance. One minute he'll have a burst of comedic energy (“Who the fuck took my paperclip!”), followed by melodramatics you'd expect from community theater (“I'm gonna get that sonofabitch if it's the last thing I do,” clenched-fist and all), and then beautifully honest moments like after his partner asks, “How do you hack it?” (“Two days a week I don't worry about it: yesterday and tomorrow.”) But it all comes back to Ramrod. He's a southern boy who drives a pickup truck that looks like it was driven by Chuck Norris in Invasion U.S.A. When a homeless woman approaches him, Ramrod flicks a lighter in her face and says, “Wanna burn? I'm the the devil, baby.” Nothing is more frightening than watching a man who thinks he's invincible and will stop at nothing to get what he thinks he deserves. Having the entire story unravel in one night, the movie plays like a slasher film, which makes it no wonder why Scream Factory released the Blu-ray. 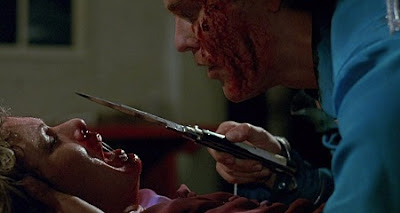 Vice Squad stands out as one of my favorite '80s cop movies not only for the performances (I neglected to mention several others), but Sherman's direction of one of the final sequences where the team tails Ramrod is unique, and I assume truthful, as to how something like that would really happen. The squad is broken up into four different cars, all following Ramrod's path in one way or another. When one team thinks they've been spotted, they split off and another car takes their place. It's those little details that push movies to another level.

Four years after Vice Squad comes out, Penelope Spheeris' Hollywood Vice Squad, starring Ronny Cox, Carrie Fisher, Frank Gorshin and Trish Van Devere (and Robin Wright's first movie appearance), was released. Although perfectly fine, it's lighter, funnier, and much less exciting than its predecessor. So when you want to watch a movie about cops patrolling sex workers, choose the one starring Wings Hauser.
Posted by Patrick Bromley at 12:00 PM