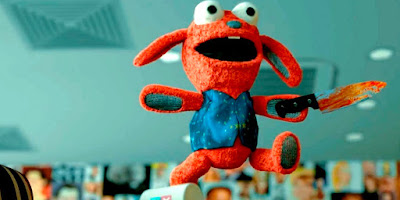 Here's what I've seen at the festival so far!

I wrote last week about Panic Fest, based out of Kansas City, MO, and how it's a genre festival I've wanted to go to for a couple of years now. Because the fest has gone largely virtual this year, I'm finally getting the chance. Sure, not every title is screening virtually -- no Prisoners of the Ghostland for me, unfortunately -- but a significant portion of the lineup is available for me to screen at home, so I'm a happy fest goer. Here's a sampling of what I've had the chance to check out so far.

My first film of Panic Fest 2021 was Red Snow, a horror comedy directed by Sean Nichols Lynch, about an aspiring horror novelist (Dennice Cisneros) who winds up with a real live vampire (Nico Bellamy) in her garage at Christmas time. The super low budget affair gets a lot of mileage out of the two lead performances and a deadpan sense of humor, with some fun interplay about what a "real" vampire is versus what a vampire fantasy is. The movie is maybe a couple years too late with its premise, seeing as it's playing into the popularity of the Twlight franchise, but I'm a sucker for a horror movie in which a character loves a thing only to find themselves face to face with the thing. Red Snow isn't even the only movie I've seen at Panic Fest to use this trope.

Next up was Benny Loves You, an English offering in which a lonely man (Karl Holt), desperate to move on with his life, throws out his childhood plushie, Benny. The doll isn't ready to be separated, however, and starts killing anyone and everyone who threatens to take his place. The movie is very demented and very, very funny, sure to upset some people (in particular dog lovers) with how dark it's willing to get. Again, the performances are all game and well pitched to the central joke -- Holt, in particular, reminds me of Timothy Balme in Dead Alive in the way that he reacts to what is happening around him. The gore gags are great, the effect of Benny moving around walks a perfect line between sophisticated and crude, and the joke of Benny himself is never less than hilarious. I love the decision to only have him repeat the same three or four phrases. You'd think the joke would grow tiresome, but it only becomes funnier the longer it goes. 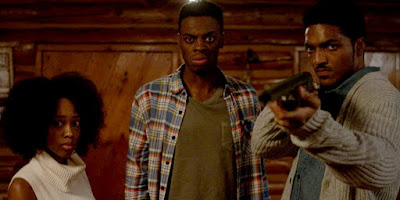 On the opposite side of the spectrum is Blood Conscious, a dark and intense and altogether humorless film written and directed by Timothy Covell. Beautifully photographed in a claustrophobic 4x3 Academy aspect ratio, the movie centers on vacationing family that arrives to their cabin only to discover a man (Nick Damici) has murdered everyone there, believing them to be demons. Where things go from there, I don't want to say. I'm not even positive I understood exactly how everything resolves -- I have my own theories about what it all means, but I don't want to share them here when no one has had a chance to see the movie yet -- but it's never less than totally compelling. There is a real sense of dread and paranoia that permeates the entire film, making it perfect for an era (era) when so many people are questioning who and what they can trust.

Another of my favorites of the fest so far is The Last Matinee (aka Red Screening), a slasher movie set inside a movie theater showing a Frankenstein film. The Spanish language production starts out promising a giallo riff (the killer's black gloves are prominently featured) and I was a bit disheartened at the prospect of sitting through a purely stylistic homage, but The Last Matinee quickly finds its own identity as a down and dirty slasher with some nasty kills and a grisly, grimy atmosphere. There's still a good deal of giallo influence, sure, but this is a movie more interested in being the thing than in talking about being the thing, which I appreciated. This is the real deal. 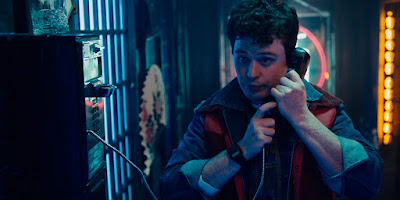 Finally, there's my favorite movie of the fest so far: Canada's Vicious Fun, directed by Cody Calahan. Like Red Snow, this is another film about a horror superfan -- in this case, a journalist writing for a Fangoria-esque magazine called Vicious Fanatics -- who finds himself face to face with real life horror in the form of a 12-step group for serial killers. Not everyone at the meeting is exactly who they present themselves to be. The movie is set in 1983 for no real reason other than a synth soundtrack, which bummed me out at first (I'm over indie horror doing '80s throwbacks) but which won me over by the end because it's awesome. The movie is funny and inventive and constantly going in new and unexpected directions. The performances are all excellent, particularly by Evan Marsh in the lead. He's goofy and geeky without overplaying and finds ways to be funny that aren't broad or obvious. It helps that the movie is very much my vibe, from the score to Marsh's Marty McFly wardrobe to the comedic tone to the over the top gore gags. Vicious Fun feels like a movie made with me in mind.