Movies is Good: THE PRODUCERS

This year, TCM is presenting the Oscar-winning and Oscar-nominated films alphabetically: last night was devoted to “P.” Has TCM ever done it that way before?

I don’t remember the month ever being programmed this way. Last night, Ben Mankewicz (boasting new “street cred” because one of THIS year’s Best Picture nominees is about his UNCLE) presented the odd double feature of Mel Brooks’s The Producers and Alfred Hitchcock’s Psycho. Strange bedfellows. 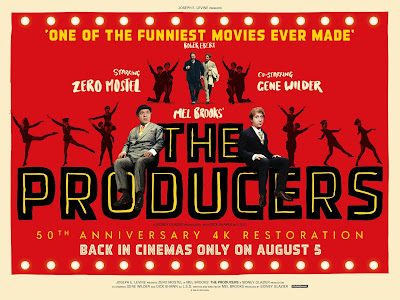 TANGENT: Mel Brooks used to tell a funny story about joining Hitchcock for dinner one night at the famous Hollywood restaurant Chasen’s. Brooks related that the two men shared a fancy eight-course gourmet feast. After the meal, Hitchcock lit a cigar, summoned the waiter and said, “Let’s do that again,” and proceeded to eat every course a second time.

I tuned in because TCM host Alicia Malone was “live-tweeting” the screening. I was chasing that live-tweet dragon! Much like my recent reaction to the “TCM Party” live-tweeting of Plan 9 From Outer Space, I found the whole thing lacking. I have been spoiled by the blizzard of wonderfulness that is F This Movie Fest! and felt both Ms. Malone and TCM Party were guilty of 1) not tweeting nearly enough, considering that virtually everyone following the hashtag has seen the movie before and would not be distracted by a little more trivia; and 2) not retweeting enough of what other viewers were saying. I did, however, get to enjoy The Producers for what might honestly have been my 100th time.

ANNOYING AUTOBIOGRAPHIBAL PAUSE: For many years during my previous life as a public high school teacher, I coached a competitive speech event called “Group Interpretation.” Imagine twelve people telling you a story; sometimes they speak individually as characters, other times they speak in unison as a kind of Greek chorus. Now imagine that those people are identically-dressed high school students. That’s GI.

Many years ago, I adapted The Producers as a Group Interpretation and learned just how funny Mel Brooks’s script is. Believe it or not, when you run kids through a piece three or four times a day for two months, you get to know the script pretty well. The Producers is full of jokes, and although that seems to be a prerequisite for any comedy, I find modern comedies a little light on jokes. 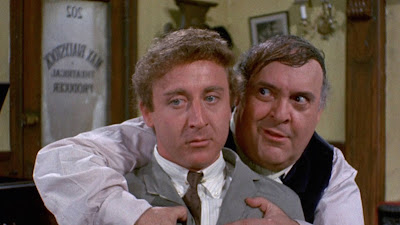 I found myself watching The Producers last night with new eyes. I had not seen it in a little while, and I kept noticing new details hiding in every corner. It is extraordinary the way great movies can hold up to multiple screenings. Here are a few things I noticed...

1. Though the film is shot and edited crudely, that never steps on the jokes. If you would like to have your third eye squeegeed quite clean, thank you, pick up a copy of film editor Ralph Rosenblum’s book When the Shooting Stops, the Cutting Begins. An entire chapter is devoted to The Producers. This was Brooks’s first film as a director and the dailies were not cutting together. Rosenblum explains how he “fixed” the film in the editing room; it’s one of the most instructive chapters in any film book I have ever read. Later in the same book, Rosenblum describes his work with Woody Allen, helping him turn his script Anhedonia into the Oscar-winning Annie Hall.

2. The fact that this film was easily turned into a successful Broadway musical is a no-brainer: its subject is Broadway and it already contained three songs (“Love Power,” not written by Brooks, was not ported over to the musical, but Brooks’s two originals— “Springtime for Hitler” and “Prisoners of Love”—were.) During this most recent viewing, I noticed just how much additional music is shoe-horned into the film. In fact, there was an entire musical number that I didn’t even remember being in there! Oh, the vagaries of memory. You want music? Here you go:

• In the first scene, when Max Bialystock (Zero Mostel) talks Leo Bloom (Gene Wilder) into entering into a criminal partnership with him, he takes Bloom into his arms and dances with him, singing, “Rio! Rio by the sea-o! Oh-meeo! Oh-mio!” It’s a wonderful moment and it establishes that some of the characters in this film possess emotions so impossibly outsized, they can only be expressed in song.
• Later, when playwright Franz Liebkind (Kenneth Mars) thinks Bialystock and Bloom are immigration agents come to round him up, he sings a demented version of “Yankee Doodle Dandy” on the roof of his building to prove his loyalty to his adopted country. When the two men assure Liebkind that they are not with the IMS, he bursts into “Deutschland Uber Alles.”

• The audition sequence brings hundreds of wanna-be Hitlers to the theater. (At one point Director Roger DeBrise [Christopher Hewitt] shouts, “Will the dancing Hitlers please wait in the wings? We’re only seeing singing Hitlers.”) During auditions, we are treated to impossibly mediocre versions of “A Wandering Minstrel I,” “Have You Ever Heard the German Band,” “The Little Wooden Boy,” “Beautiful Dreamer,” and Dick Shawn’s tour-de-force, the previously mentioned “Love Power.” 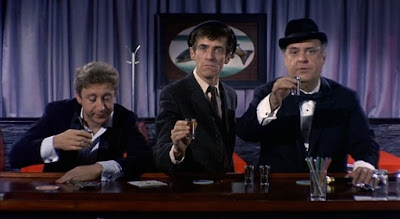 • When Bialystock and Bloom retire to a nearby tavern halfway through the debut performance of their new show, they are content that Springtime for Hitler will be the biggest flop in Broadway history (which is their goal.) In the bar they meet a good-natured inebriate (William Hickey) and the three engage in a delightful, impromptu three-part harmony performance of “By the Light of the Silvery Moon” with Bialystock soft-shoeing around the bar. This throwaway scene really demonstrates what an effortless, charming performer Zero Mostel was.

I always thought Zero Mostel got a raw deal from the movies, which just didn’t know what to do with his outsized talent. Like Bert Lahr before him, Zero Mostel played everything BIG. This worked splendidly on stage, but on film he risked coming across as grotesque. The bigger-than-life Max Bialystock was ideally suited to his talents. Mostel is also terrific as lawyer Abe Greenberg in Peter Yates’s The Hot Rock. Or check him out as Borscht-belt comedian Hecky Brown in Martin Ritt’s The Front—he’s the best thing in the movie. It certainly didn’t help Zero Mostel that he spent a decade blacklisted in the 1950s, like his tragic character in The Front.

All these tiny hidden musical interludes I noticed lent even more weight and poignancy to Gene Wilder’s concluding speech in court. He sings Mostel’s praises and adds, “I never sang a song before... I mean with someone else. I never sang a song with someone else before.” It seems that in Brooks’s world, lonely, lost people wander around, looking for someone else to sing with. For such a seemingly dark comedy, this is so unexpectedly sweet. Much more than the “Prisoners of Love” coda, Gene Wilder’s sentencing speech is the cherry atop this wonderful ice-cream sundae of a movie.

3. The final thing I noticed was this film’s breakneck pace. Brooks packs a lot of material into only 89 minutes, the perfect length for any comedy. I am of the opinion that modern comedies are all too long. (I’m looking at you, Judd Apatow!) The Producers should be studied in film schools for its pace and magnificent brevity. 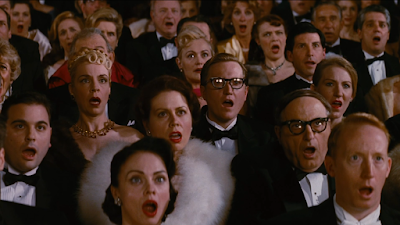 On the night of April 29, 1969, here is how Mel Brooks accepted the Academy Award for Best Original Screenplay:

“I didn't trust myself in case I won, so I wrote a couple of things here. I want to thank the Academy of Arts, Sciences, and Money for this wonderful award.

“Thank you very much.”
Posted by Patrick Bromley at 5:00 AM