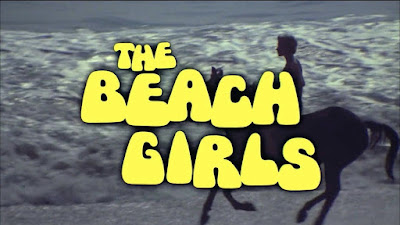 A Crown International Picture. Just so we know what we're getting.

The Beach Girls is a movie that doesn't hide what it is. Essentially a riff on an Animal House sequel, the movie opens with a Beach Boys ripoff song by the band Arsenal and copious shots of beachgoers doing beach things. The very first thing we see is a woman riding horseback across the sand in a bikini. You ask, “Anthony, is this bouncing woman shot in slo-mo?” Dear reader, of course the bouncing woman is shot in slo-mo. And friend, not once, not twice, but thrice do we witness a woman's bikini top being snatched by a dog throughout the movie's 91-minute runtime. 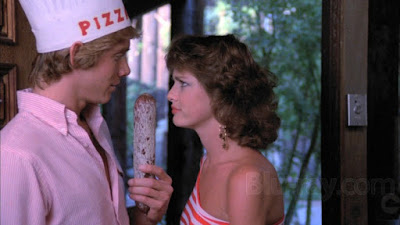 It's all fun and games until Uncle Carl Purdue's snide fiancee shows up unannounced one evening to spoil all the drinking and drugging. And just to make sure everyone, including the man in the back who's been in a coma for six years, knows she's a real priss, she pulls up in a limo driven by the most offensively portrayed Asian character I've ever seen. The fiancee calls her betrothed to complain about the rowdy kids and Uncle Carl Purdue comes home the next day to see what all the fuss is about. Meanwhile, the pervy, clumsy gardener is always trying to sneak a peek at whatever young woman is around but constantly finding himself covered in paint of falling off ladders. Don't worry, though. The solo bassoon added into the soundtrack will let you know when we're about to see some gardener hijinks.

While Ducky, Ginger and the flotsam populous of Paradise Beach are succeeding in their summer plans of catching every venereal disease discovered by 1982, nebbish Sarah is failing miserably at her plans of a having a quiet, relaxing summer. Plans take a turn, though, when she meets a handsome young man who tries to pull her out of her comfort zone. “You're programming yourself just like a computer... Follow your impulses once in a while. Be human.” Believe it or not Patrick Duncan, who went on to write Mr. Holland's Opus and Courage Under Fire, didn't win an Oscar for The Beach Girls, which happened to be his first script. The romance between Sarah and her new beau, who serenades her with folksy guitar, by the way, blossoms and we're treated to an incredibly embarrassing scene of the two of them riding three wheelers across the beach. 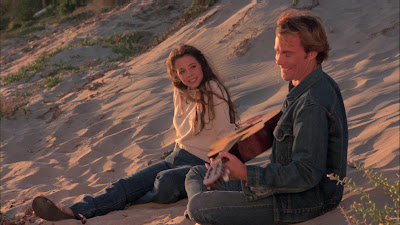 While all the twenty-something sex is happening, we also have a subplot concerning Captain Blye, a proto Lt. Harris from Police Academy, as the leader of the Coast Guard? The Navy? It doesn't matter. Lawmen on boats is what they are. Captain Blye and his crew are looking to stop drug smugglers from bringing thousands of pounds of marijuana to the California shores. If you weren't offended enough by the Asian limo driver, Captain Blye's crew is made up of the gayest seamen (heh) ever to be put on film, stereotyped to death so even the aforementioned coma patient knows what's going on. Captain Blye and his crew of queens catch the smugglers, but not before the merchandise is chucked overboard, inevitably washing up on shore where the horny partiers collect and bring back to the house SIX (6) garbage bags full of weed of which they proceed to all smoke. 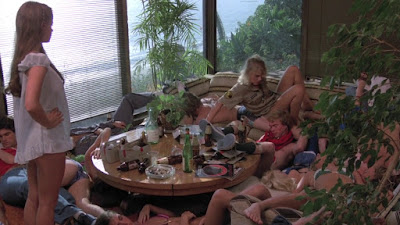 So to recap: Sarah and her horny friends drink, drug, and fuck by the ocean. The gay Coast Guard make their arrests but fail to secure the drugs. Oh, Uncle Carl Purdue and the fiancee separate after he smokes some of the weed and she is liberated (sexually, of course) by a hunky twenty-something. You wouldn't guess by the snarky tone of this review that I enjoyed this movie, but I loved it. When else but Junesploitation are we allowed to laugh at and revel in mud wrestling sequences, a disco version of “Flight of the Valkyries,” and lines like “I'm going muff diving” as a guy in flippers and snorkel walks by?
Posted by Patrick Bromley at 5:00 AM

Email ThisBlogThis!Share to TwitterShare to FacebookShare to Pinterest
Labels: 1982 movies, 52/82, the beach girls