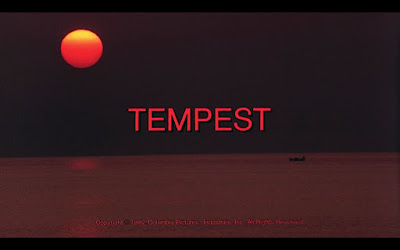 My wife Bobbie and I celebrated 11 years of marriage in April, and in December we will have been a couple for 14 (?) years. There are few on-screen couples, and even fewer real-life celebrity couples from whom I find inspiration. While I love Gena Rowlands and Peter Falk as an on-screen couple, they just don't compare to when Rowlands appears with her real-life husband, John Cassavetes, as an on-screen couple. There is no other pair that contains the electricity that Rowlands and Cassavetes had on screen. I'd always thought Rowlands was at her best when directed by her husband (A Woman Under the Influence, a masterpiece), yet when she appears in Paul Mazursky's loose adaptation of William Shakespeare's The Tempest, acting with (as opposed to directed by) her husband, it's unlike anything I've ever seen.

Co-written and directed by Mazursky, Tempest follows architect Philip Dimitrius (Cassavetes) during his mid-life crisis. The film opens with Philip waking up to the sun rising over the ocean on an unnamed Greek island (hi, Summer Lovers). He slips on his robe and his boots and waves to a woman standing on the balcony of a stone house built into the side of a rocky hillside. She yells, “Separate bedrooms is one thing, but this is ridiculous!” The woman is Aretha, played by the always breathtaking Susan Sarandon, and along with Philip's daughter, Miranda (Molly Ringwald in her first film role), they live on a secluded, rocky island in the Mediterranean. The only other inhabitant of the island is a lonely goat farmer called Kalibamos played hysterically by Raul Julia. After setting the present day, we jump back 18 months to New Year's Eve in New York City and the story begins. 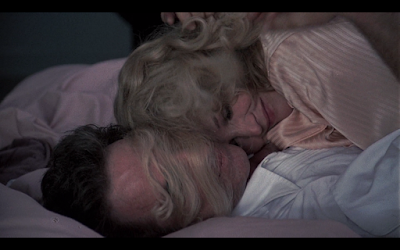 Philip is married to former actress Antonia (Rowlands) who is planning on resurrecting her career just as Philip wants to quit his. He's under contract with a developer named Alonzo and is tired of living the same life over and over, day after day. Seeing his boss surround himself with Yes Men is exhausting to Philip. Alonzo sees what's going on and says, “You're becoming a bitter bastard. You want to stay a boy, but they don't know who they are.” Which is exactly how Philip feels. Miranda also sees something is going on with her father. “You're extremely philosophical for this early in the morning,” she goads. He's bored in his marriage; he doesn't know what he wants. “If I quit, I won't have any more excuses,” he tells Antonia before blurting out, “I hate you!” Here we see a different version of the neurotic New Yorker than we're used to seeing with Woody Allen. While Allen's seems more cartoonish and high-strung, Cassavetes' neuroses come out more conventionally, realistically. What I see in Philip scares me from growing older.

The tipping point for Philip and Antonia occurs when he comes home drunk one night while she's entertaining the creative team of her new play (including Mazursky as the producer, Terry Bloomfield). Philip bursts through the door singing, and in what has to be an improvisational moment, asks Bloomfield to sing a song so the two men can dance together. Like so many moments in Mazursky and Cassavetes films, this one is so real and uncomfortable yet works perfectly within the context of the scene. 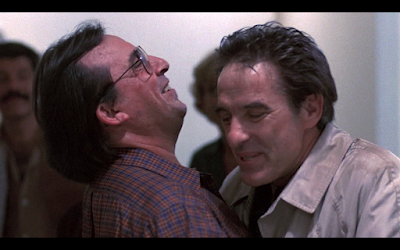 While Cassavetes is clearly on top of his game here, the women, as in life, keep the men sane even when logic has flown out the window. Sarandon's Aretha has run away with this man and his daughter on a whim, thinking she's going on wild adventures during the day and having wild sex at night. While still playing Philip's game, to her dismay the adventure doesn't look anything like she imagined. By day she's washing windows, sweeping floors, washing rugs in the ocean, and building an amphitheater at her new lover's behest. By night she's sleeping alone, in a totally separate dwelling than her man. Not exactly thrilled, Aretha isn't necessarily unhappy. In the sweetest moment of the film, while washing a rug in the ocean with Miranda, the ladies yell up to Philip, “We're tired of being prisoners!” He retorts, “Tough shit!” followed by Sarandon and Ringwald singing “Why Do Fools Fall In Love?” in perfect harmony. 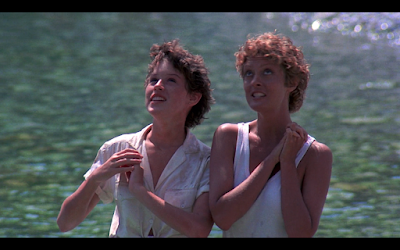 It is an absolute crime the only physical release available for Tempest is an out of print DVD. Luckily, though, you can rent it at all the usual streaming places. Like many of Mazursky's films, this is an honest, wandering slice of life that combines real life stresses and humor that come with relationships. Even at 140 minutes, not once did feel bored or lose interest. Thanks to Mazursky's writing and direction, yes, but the cast portraying this story demands that you follow along. In a short transitional scene Marzursky shows just how lazy and peaceful running away from life's troubles would be – Aretha napping topless in a hammock, chickens roaming freely, goats lazing in the shade, the water of the Mediterranean calmly lapping at the shore all set to a gorgeous score by Stomu Yamashta. Make no bones about it, though – running away to a secluded island may sound like a dream, but the tempest of life will always catch up with you.
Posted by Patrick Bromley at 12:00 PM