Nominated for Outstanding Supporting Actress in a Motion Picture (Angela Bassett) at the NAACP Image Awards.

• Best Scene/Moment: I like all the scenes between Danny (Paul Soles) and Jack (Edward Norton) as janitorial coworkers at the Montreal Customs House. It’s all a long con being put on by Norton’s character, but the two have a sweet interplay which makes the gut punch of Danny finding out “Brian” (Norton) is not who he seems to be even more impactful. There’s a moment where Danny suggests he and Brian hurry up cleaning the floors so they can leave their shift early and get pancakes and it sounds so appealing that I wanted the movie to break off from the actual heist so they could go do that.

• Best Song: The Score has a few jazz tunes (De Niro’s character owns a club called NYC) but none of them stuck with me so I’ll cheat here and say the best “song” is the recurring theme by Howard Shore. If there were ever a time to cheat the “Best Song” category and pick a score it would be for the movie The Score from the hands of Howard Shore. 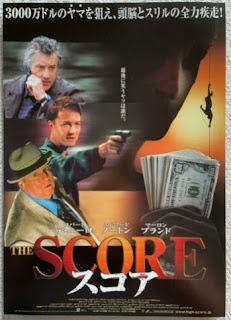 • Best Merch: A Japanese mini poster for the film for $20! I love it, especially the elements being used to sell the film. It’s like “YOU WANT TO SEE DE NIRO ON THE PHONE?! NORTON HOLDING A GUN? BRANDO WONDERING WHAT’S UP?” The cherry on top of the sundae is the dude (De Niro?) holding a wad of cash even though that has nothing to do with what these guys are stealing in the movie.

• Director Check: The Score was directed by Frank Oz. I feel bad for him because reportedly he was hazed on the set of this film by Marlon Brando so badly (who kept calling him “Fozzie” and “Miss Piggy”) that Robert De Niro had to direct Brando’s scenes via headset with Frank Oz giving instructions. Brando’s final moment on the film also had to be manipulated because he refused to smile, requiring the filmmakers to insert a shot of Brando smirking using CGI. Actors, man, am I right? The Score was a bit of an unusual film for Frank Oz to direct since most of his directorial efforts were in either the fantasy or comedy genres. I like quite a few of them, including The Dark Crystal, The Muppets Take Manhattan, What About Bob?, The Indian in the Cupboard, and Bowfinger. The last feature film he directed was 2007’s Death at a Funeral, but he’s worked in documentaries in recent years, directing 2017’s Muppet Guys Talking and 2020’s Derek DelGaudio’s In & Of Itself. 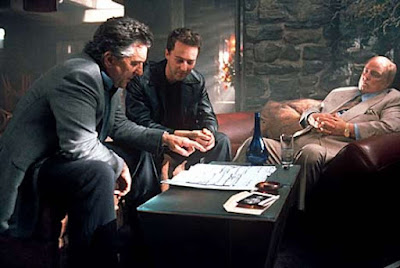 • Only in 2001: Edward Norton’s portrayal as a janitor with disabilities. Film Twitter would have torn this movie apart if it came out in 2021.

• I Don’t Miss: The trope of hackers who live in their parent’s basement and yell at their mother.

• 2001 Crush: Edward Norton man crush. I thought he was the coolest. 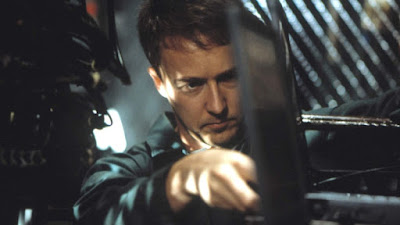 • What I Thought in 2001: I dug it, although I was slightly disappointed. I thought the film was sort of slight considering it was a De Niro-Norton-Brando heist movie that wasn’t pitched at the same intensity as something like Heat.

• What I Think in 2021: I love it. This is a perfect Sunday afternoon movie with solid acting, set in a beautiful looking Montreal setting. Nothing flashy; just a good story, well told. I miss “grown up” movies like this.
Posted by Patrick Bromley at 5:00 AM