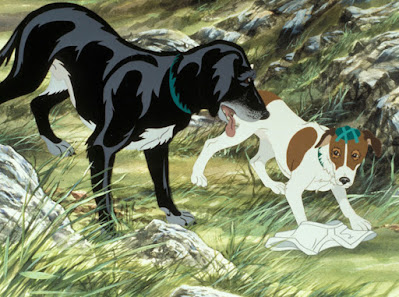 Who let the bubonic plague-ridden dogs out?

I don't know what I expected from Criterion Channel's Art-house Animation collection of films, but it certainly wasn't walking away depressed after each and every one. Out of the 30-plus animated films in the collection, I've watched or seen five: Belladonna of Sadness, The Plague Dogs, It's Such a Beautiful Day, Rocks in My Pockets, and Tower. While the latter film ultimately leaves you with a hopeful message about humanity (as hopeful as you can get in a documentary concerning a mass shooting), the other four completely altered my outlook for the remainder of the day that lay ahead of me. I love cartoons and animation – especially hand-drawn art. Belladonna has some of the most breathtakingly beautiful watercolors you'll ever see. Beautiful Day shows that simplicity in art can still be affecting (including a title that will dupe the viewer). Rocks tells us that humor is necessary for heavy material. And The Plague Dogs... well, it's exactly what the title tells us. 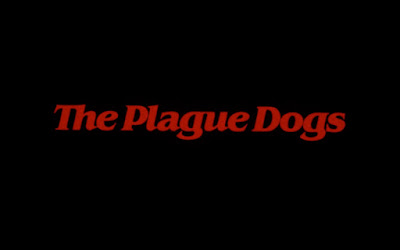 The film features vocal talents by John Hurt, Christopher Benjamin, James Bolam, Nigel Hawthorne, and Patrick Stewart. It's based on the novel of the same name by Richard Adams with a screenplay and direction by Martin Rosen. (Rosen also wrote and directed the film adaptation of Adams' novel, Watership Down.) The story follows Rowf and Snitter after they escape the lab where they had been subjected to torturous experiments including vivisection and drowning. With the aid of a fox called The Tod, they spend the movie ducking and dodging hunters, bullets, and bloodhounds. Throughout the film we hear voiceovers by scientists and government officials, revealing that these dogs may very well have been purposely infected with the bubonic plague during experiments for military purposes. The film ultimately has an ambiguous ending, but let's be honest: it ain't a happy one.

The animation is beautiful and reminds me of the storybooks my parents used to read me when I was younger. Although the hand-drawn art may soften the extremely heavy material for some people, I found it only added to the melancholic tone. Watching a cartoon of three animals being carelessly hunted for sport, knowing that they might very well be infected with a horrible disease leading to their premature demise in the first place, and then listening to humans trying to figure out how to cover this whole thing up is... odd. I've judged film festivals and watched hundreds of animated shorts dealing in serious subject matter. Five to 10 minutes is a good length in my estimation. The Plague Dogs, though, is a feature-length film sitting at 103 minutes. After watching a small handful of sad animation in the days leading up to this was arduous, to say the least. 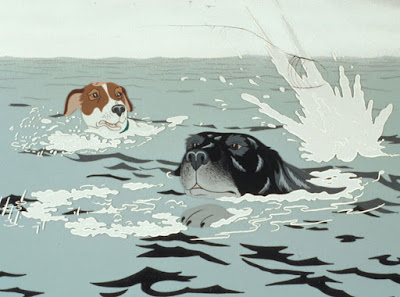 This isn't to say The Plague Dogs is a bad film. Not so at all. Having been released in the early '80s with subject matter pertaining to infected characters being shunned and hunted, I couldn't help but thing of what the world was going through with the AIDS epidemic at the same time. Adams' novel was written in 1977, and I assume his main themes weren't allegorical at all. The novel and movie shine a light on the inhumane treatment of animals for scientific purposes. Although AIDS wasn't referred to the name we now know until September of 1982, the CDC first published an article in the summer of 1981 about an immune disorder occurring predominately in gay men. Along with government officials, many in the medical community tried to blow off this new disease, referring to it as “gay cancer,” sweeping hundreds of cases under the rug, opting to let these people just die, in the end creating a cover-up. In The Plague Dogs, Rowf and Snitter refer to the scientists as “white coats.” Instead of trying to rescue these lost animals, “the white coats” decide to employ hunters to go out and simply kill the dogs and pretend this event never happened.

Again, I don't think Adams (or even Rosen) had any intention on commenting on a mysterious deadly disease sweeping through specific communities in the big cities of America, but I couldn't ignore it. AIDS patients were shunned, and those that were allowed to stay in hospitals were completely cut off from any other human, their rooms cordoned off as if warning everyone that “You will die if you come near this space.” After the dogs escape, Rowf comments that he wants to “change to what we used to be. Real animals. Wild animals.” They're no longer trapped. Snitter talks about the simple things: the cool water of a pond, the wind blowing the leaves around, fresh air. But they know their not in the clear. “The dark is all around us. I can feel it,” says Snitter. 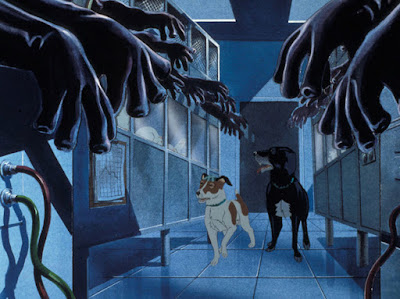 These two dogs were looking for even the slightest amount of compassion from any human being, yet they never found it. Word spread like wild fire that two dogs that could topple the human race were on the loose. They needed to be stopped and destroyed. Not one human took into consideration that these dogs (patients) had real emotions, real souls, and deserved love just like anybody else. The Plague Dogs may be a heavy movie that'll punch you right in the heart, but it's yet another story that shows the evil of humanity and how easy it is to change.
Posted by Patrick Bromley at 5:00 AM