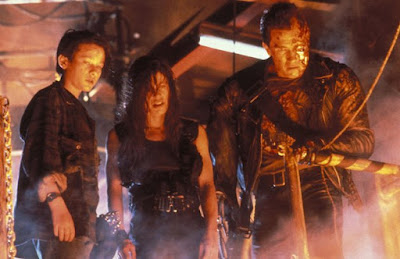 1. There’s a lot of face trauma and collateral damage to sympathetic extras in this movie.

2. My favorite action sequences in the movie are the helicopter chase (because all chases should have a helicopter) and the truck-motorcycle chase. It’s so well edited!

3. This was my first R-rated movie in theaters! I also used to want Edward Furlong’s haircut from this movie, but my barber told me I didn’t have enough hair to do that.

4. It’s so refreshing that Miles Dyson (Joe Morton, one of my favorite character actors) is onboard with the plan to take down Skynet. If this came out today there would totally have been a heel turn midway through their raid. 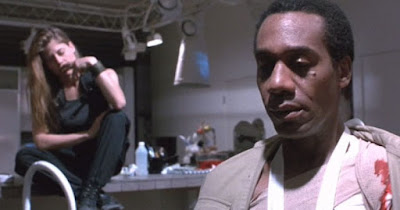 5. James Cameron’s direction is, of course, amazing, but let me take a moment to praise his screenplay (co-written with William Wisher). The characters are very well-drawn, with emotional relationships between them, the structure of the three acts is just about perfect, and it’s an action film full of ideas. Even the dialogue is good (and funny), which is usually the most common complaint about James Cameron’s scripts. I’ll say a possibly controversial statement: I think James Cameron is one of the best filmmakers ever.

6. Linda Hamilton should have been nominated for an Academy Award for her work in this movie. It’s just as strong as Sigourney Weaver in Aliens, who was justifiably nominated.

7. This movie has one of my favorite posters. And the merch! Let’s talk about the merch for T2! I had everything – the comics, the trading cards, the video games, the cup from Subway, movie magazines, the soundtrack…I was obsessed. I want that pinball machine.

8. They should have ended the series after this movie. You can’t top T2, so why bother trying? I think the future sequels misunderstand the appeal, which is that it’s a macho Arnold Schwarzenegger, Linda Hamilton, and James Cameron action franchise. The other movies seem to believe we love the Skynet and War with the Machines lore. The ending of this movie (with Arnold lowering himself into the Mount Doom queso) even supports this on a meta level. John Connor is arguing to not let the series die and for there to be more sequels and the T-800 and Sarah Connor are looking at each other like “Oh no, we gotta quit while we’re ahead. Trust me, it’s better this way.” 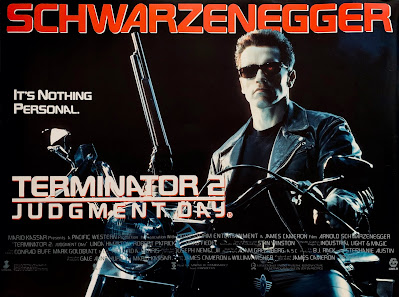 9. On this re-watch, one of my main takeaways was how strong Edward Furlong’s performance is in the movie. For some reason, I had convinced myself it was bad over the years and I’m not sure why. The moments between him and Linda Hamilton are especially good, which is even more disturbing to me because I saw Furlong at a T2 panel a couple years back where he said he wanted to hook up with Linda Hamilton when he was making this movie (his words were “She plays my mom? I’d hit that.”). The best moment was after he said that Robert Patrick (who makes for an all-time great villain in the film) turned red, stood up, and gave Furlong a playful “You’re done” pat on the shoulders.

10. I was obsessed with the Guns N’ Roses single (“You Could Be Mine”) from T2. I had a cassette single for it (the flip side of which had the song “Civil War”) and I made my poor family listen to it over and over on a road trip once. I remember watching the MTV top 20 music video countdowns and being completely invested on where “You Could Be Mine” was ranked and whether it was rising or falling on the chart. I still like the song very much.

That’s all for Camp Carolco this summer, but get ready for Creepy Carolco in October featuring Angel Heart and Jacob’s Ladder!
Posted by Patrick Bromley at 5:00 AM