Movies is Good: THE TEN COMMANDMENTS

I decided to dive back into this ABC-TV Easter perennial on the occasion of its release on 4K Blu-Ray disc. Would the disc presentation pale in comparison to the TCM/Fathom Events screening I attended pre-COVID? Would the film transcend its current ranking in my Personal Annals of Cheesy Goodness? Would the film chasten my heart, make me re-examine my sinful, sinful life, and lead me, sobbing, back to the Lord? 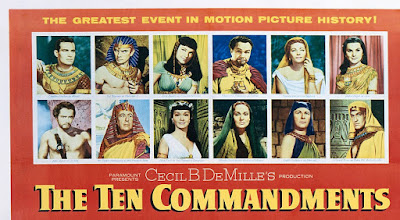 My very first column for F This Movie! was what I imagined to be an epic takedown of this epic film for a series I did in 2011 titled “Shitting on the Classics.” My, I thought I was clever. My, I thought I could write. My, I thought they were dusting off a shelf somewhere to place me next to Robert Benchley, S.J. Perelman, Dorothy Parker, and P.J. O’Rourke. But, no. My writing was juvenile; my sense of humor more so.

And then the Lord smote me. The Lord works in strange and mysterious ways, remember! The Lord was so unamused by my scribblings, he punished me to CONTINUE WRITING COLUMNS HERE FOR THE NEXT TEN YEARS. And, lo, the Lord did grin, and the readers were amused by me, a humble jester, flailing around, trying to get strangers to notice my questionable knowledge of film and questionable sense of humor. One year, in an act of utter defiance, I donned the robes of the Holy Church in Rome and pretended to be the “Pope of Film.”

God’s punishment for that little act of blasphemy? A pacemaker. Oh, do not question the ways of the Lord.

THE PLOT IN BRIEF: The Bible (old parts only.) 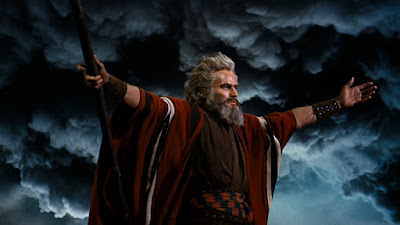 THE PLOT AT LENGTH: Pharaoh (Ian Keith) hears one too many stories of a Savior coming to free the Israelite slaves he exploits for free labor. Pharaoh orders all new-born males to be slain. Yochabel (Martha Scott) loves her newborn son enough to place him in a basket and send him down the Nile to escape Pharaoh’s blood-thirsty baby killers. The basket is retrieved by future Pharaoh’s daughter, Bithiah (Ann Baxter, later Nina Foch) who resolves to raise the infant as her own. She names him Moses (Fraser Heston, later Charlton Heston).

Moses grows up as a virtual son to the new Pharaoh (Sir Cedric Hardwicke). Trouble is, Pharaoh has an actual son, named Rameses II (Yul Brynner) who is a bitter, entitled, stuck-up pain in the ass. Moses shows himself worthy of the throne by winning Ethiopia for the Pharaoh and building a treasure city/immense tribute/ultimate gravesite to his adopted father. His secret? He actually gives the slaves food and one day off a week. Rameses II, who has no actual accomplishments of his own, badmouths Moses’ accomplishments and fears Moses will be named as new Pharoah. 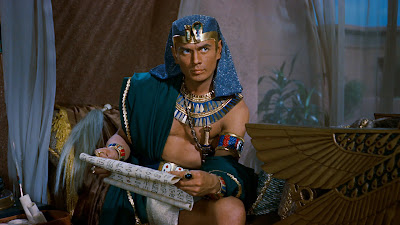 Fortunately for Rameses II, Moses is discovered to be the son of slaves, is banished to the desert, and Rameses II is named Pharoah. Unfortunately for Rameses II, Moses meets God in the desert and they become BFFs. Moses returns to Egypt to free the slaves, enact all sorts of signs and plagues, and generally humiliate Rameses II. For an encore, Moses parts the Red Sea and witnesses God carving the original Ten Commandment tablets into a mountainside using fire. Impressive.

Rameses II is left to become King of Siam and dance with Deborah Kerr. A puzzlement!

My first exposure to The Ten Commandments was watching it during high school at a girlfriend’s house Easter weekend. We guffawed at all the ridiculously leaden lines of dialogue and wound up getting out pen and paper to write them all down. These crazy lines are now burned into my memory much like the commandments were burned into that mountain. As I re-watched the film (43 years later!) the lines returned as greatest hits from my misspent youth. All my favorites were still there: "A chariot? Here in Goshen?," "Beauty is but a curse to our women," "Blood makes poor mortar," and of course, "Moses, you stubborn, splendid, adorable fool." 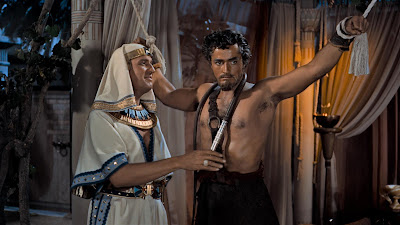 I once read a novel wherein the author described The Ten Commandments as the ultimate 1950s Drive-In make-out movie. Because the movie is almost four hours long, there was lots of time to get intimate with your car companion, and because the film features long stretches of agonizing dialogue scenes, you didn’t feel like you were missing anything with a little kissing and hugging. The author suggested it was possible to kiss and hug, come up for air in time to see the “Building the Pyramids” sequence, back for more nookie, take a short break for the “Plagues of Egypt” sequence, complete whatever degree of consensual folderol was on that night’s menu, get some popcorn, and still not miss the film’s climax featuring the parting of the Red Sea and a third act appearance by God. If teenagers were grilled on the plot upon arriving home, they would have seen all the good parts (and some good parts that had nothing to do with Cecil B. DeMille’s movie, nudge nudge.)

The new 4K disc is striking. I know that Paramount did a 6K scan of the original negative back in 2010, and I am assuming that is the transfer featured on this disc. Re-watching all 220 minutes of it, I was struck by the absolute disparity between picture quality and movie quality that this new disc represents. On the one hand, this is one of the best-looking discs I have ever seen; on the other hand, this film is archaic, plodding, and inert. There are some scenes that look like View-master slides of my youth brought to (life-less, still) life. The Lord giveth... and the Lord taketh away. 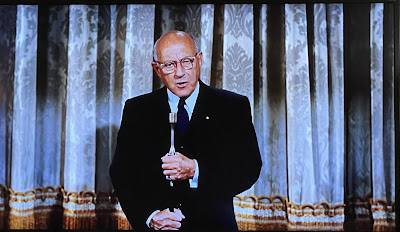 I had forgotten that the film opens with a prologue in which director Cecil B. DeMille himself walks out from behind a curtain and addresses the film’s audience on what they are about to see. This entirely unnecessary ego-trip (we know what we are about to see—the Bible has literally been printed FIVE BILLION TIMES) functions as a reminder that the film is long and that, though there will be an intermission, perhaps we should all go potty now?

This dull opening speech reminded me of Edward Van Sloan’s prologue to the 1931 Frankenstein film, in which he also warned the audience about what they were about to see. The two sequences are eerily similar—unmoving camera from a middle seat in an imaginary auditorium—and comparing them made me think of The Ten Commandments as a horror film. Why not? It features several cast members who made many horror films (Vincent Price, John Carradine, Sir Cedric Hardwicke, and Yvonne DeCarlo, to name a few) and an obsession with gory imagery. Could we see the real plot of the film as “Sociopath jealous of adopted brother defies a vengeful God, summoning the terror of blood, flies, locusts, famine, and mediocre special effects?” The only thing this film lacks to cement its true kinship with Universal Horror is A MUMMY! 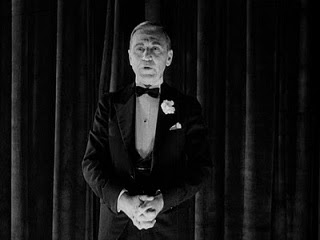 Watching this interminable film last week left my mind free to wander for extended periods of time, and I kept remembering one of my favorite doo-wop songs of the 1950s by the Moonglows, named, appropriately enough, “The Ten Commandments of Love.” I always loved the backing vocals of whichever Moonglow sang the bass part. It has an excellent “call and response” structure where, after the commandment in question is sung, Harvey Fuqua quickly speaks the line again, as if he were afraid that we missed it the first time or perhaps because he thought that we were all taking notes. My favorite aspect of the song though, and perhaps proof that it was thrown together quickly in the studio, is that there is no “Tenth Commandment of Love,” only nine:

“The Ten Commandments of Love”

1) Thou shalt never love another
2) And stand by me all the while
3) Take happiness with the heartache
4) And go through love wearing a smile
Oh, how happy we will be if we keep the ten commandments of love

Love, oh sweet love
It's oh, oh so grand
You will find since the beginning of time
It has proved throughout all the land...

7) So come to me when I am lonely
8) Kiss me when you hold me tight
9) Treat me sweet and gentle... when we say good night 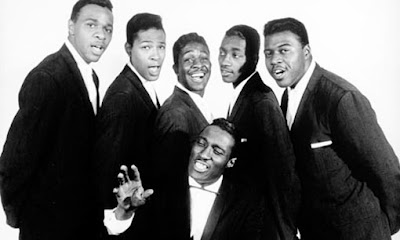 I have always longed to know the Tenth Commandment of Love. (Perhaps if I am really good, God will use one of his tinier fingers of fire to carve it into my bedside table tonight as I sleep. Lord, hear the pleas of your humble servant.) Any thoughts, gentle readers?
Posted by Patrick Bromley at 5:00 AM