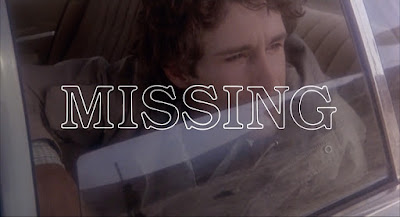 Something to make you sad on the road to Scary Movie Month.

I'll be right up front with you: this movie really bummed me out. Costa-Gavras is the realist version of Alan J. Pakula. Klute, The Parallax View, All the President's Men, et al. are thrilling and entertaining while based on factual, if not plausible situations. Missing, Z, Amen., et al. are also thrilling and entertaining while based on factual situations, if not very plausible situations. Both filmmakers are some of the greatest that ever lived. Both filmmakers were able to take the political thriller and turn it into a blockbuster while also staying true to their own convictions. Pakula, though, somehow adds some sort of unidentifiable fluff to his pictures while Costa-Gavras takes the reality of the world at any given moment and shoves it down your throat with a barbed wire-wrapped baseball bat until you want to lift up the biggest boulder you can find and hide under it for the rest of eternity.

To be fair, we're in the middle of a pandemic, and political divisiveness is at an all-time high (at least in my lifetime). Missing is great. Don't get me wrong. It's a solid four-star (if not higher) movie. But whereas Pakula leans into government distrust in a fun, conspiratorial way, Costa-Gavras presents the same material as bleak truth. The story, based on real-life events as told in the original novel by Thomas Hauser, follows the disappearance of journalist and activist Charles Horman (John Shea) and the subsequent search by his father, Ed (Jack Lemmon), and wife, Beth (Sissy Spacek), during and immediately following the 1973 coup d'etat in Chile. In their search for the truth, Ed and Beth begin to suspect the United States may have been directly involved in the coup, ultimately causing the loss of life to hundreds of human beings. 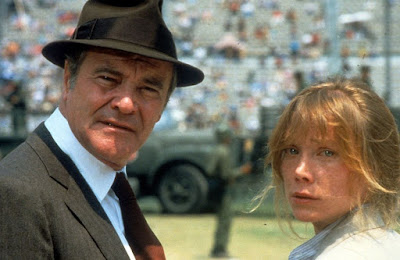 The cast features a terrific lineup of “that guy” character actors including Melanie Mayron (Girlfriends). The score by Greek prog-rock icon Vangelis mixes sweeping orchestral pieces with deeply disturbing electronic drones and pulses that perfectly conveys the emotional rollercoaster upon which we're riding. The first act follows Charles, Beth, and Terry (Mayron) as they navigate the volatile landscape of Valparaiso with its strictly-enforced curfew, ever-present and heavily armed military, and constant threat of being kidnapped by government goon squads. “From now on, women in this country wear dresses!” barks a soldier at an innocent woman on the street while aggressively patting her down. The night before Charles' disappearance, Beth is stranded out on the street, forced to hide in a doorway the entire night. The most moving image of the film is when Beth witnesses a military jeep armed with a turret gunner, chasing a beautiful white horse down the street. In this world, the real world, even the innocent and bright beauty of nature is no longer welcome. That's when it hit me: Missing may be too frightening for me to watch right now. 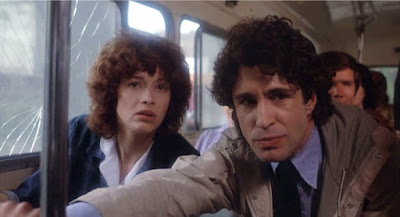 Costa-Gavras won the Oscar for best adapted screenplay in 1983 for Missing. In 1982 he won the Palme d'Or at Cannes while Lemmon won best actor. While emotionally taxing, this movie does everything right. After Ed arrives in Chile, he's unpacking in his hotel room as Beth is trying to talk to him. He's impatient with her and all his responses are cold and clipped. Ed is a Christian Scientist and doesn't approve of the ideologies or lifestyle choices of his son and daughter-in-law. When asked if his son shared his beliefs, Ed says, “Well, you know how young people are.” Back in the hotel room, Beth finally asks, “Do you blame me?” After an excruciatingly long and uncomfortable silence forcing an audible groan from me, Ed finally snaps, “I don't want to hear any of your anti-establishment paranoia!” It was at that point in the film where I hoped our co-lead would die. (Just to be clear: Jack Lemmon is one of my all-time favorites.) 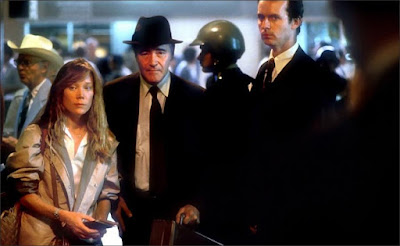 Missing is a phenomenal movie. And for anyone that is able to deal with some hyper-realism in their entertainment right now, you will love it. On the other hand, for those like me who want just a little bit of realism mixed in with their entertainment, this will most likely affect you the same way it affected me. In Beth and Ed we get two opposite sides of the political/idealogical spectrum. With social media and the 24-hour news cycle our faces are constantly rubbed in both sides and everywhere in between. Missing is an historical document, a call to arms, and a heartbreaking piece of entertainment that deserves to be seen when you are emotionally prepared.
Posted by Patrick Bromley at 5:00 AM