Review: THE MANY SAINTS OF NEWARK 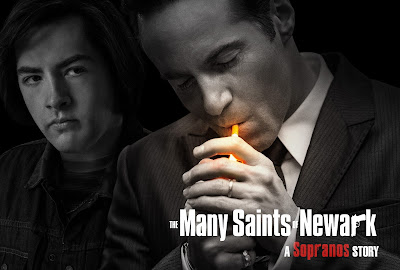 Woke up this mornin’…

David Chase’s The Sopranos is easily the most influential live-action television show in the history of the medium. That’s not hyperbole, nor is it recency bias. I didn’t say it was the best show or that it was my favorite. It’s neither, frankly, but there is simply no denying the profound effect it has had on the way television is produced and broadcast in the two decades since its premiere. Television does not shift from disposable pablum to sophisticated, nuanced, long-form storytelling without The Sopranos. There is absolutely no room to debate this. We cannot move on unless we come to a consensus on it as objective fact. Good. With that out of the way, we may also agree that revisiting Tony Soprano’s world after fourteen years — especially in the motion picture format — is a risky proposition. After all, The Sopranos is a story about the banality of evil and the contradictions of twenty-first century life. It’s a story about suburban decay and the fading archetype of the American male. Tony’s story is a slow burn, not a thrill ride. 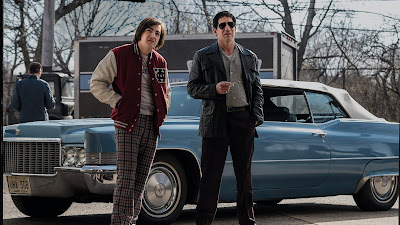 Despite HBO’s nostalgic marketing campaign, however, The Many Saints of Newark isn’t really a Tony Soprano story. He’s floating around (played with winning charm by James Gandolfini’s son, Michael), but this is really the story of Dickie Moltisanti (Alessandro Nivola), an up-and-coming soldier in New Jersey’s DiMeo crime family. We meet him during the 1967 Newark Riots, when he’s struggling to reconcile his career ambitions with his private insecurities about himself as a man, a son, and a general in an unwinnable war. When his father (Ray Liotta as “Hollywood Dick” Moltisanti) returns from Italy with a beautiful young wife (Michela De Rossi as Guiseppina Bruno, with whom Dickie is immediately smitten), Dickie resolves to turn a real corner. But the times, they are a-changin’: Johnny Boy Soprano (Jon Bernthal) is heading to prison on an assault charge, his brother Junior (Corey Stoll) is too conniving to be trusted, and Dickie’s former protege (Leslie Odom, Jr. as Harold McBrayer) is forming his own crew.

First, the good: Sopranos loyalists will appreciate the countless Easter eggs and callbacks peppered throughout this long-awaited return to Jersey. Some are just sight gags, like a young Paulie Walnuts (Billy Magnussen) applying lacquer to his fingernails at the dinner table. Some are more elaborate, like Vera Farmiga’s wonderful depiction of Livia Soprano, whose borderline personality disorder is already poisoning her relationships and leads to one especially laugh-out-loud moment with her husband, Johnny. Nivola and Liotta bring the famous Moltisanti temper to life in ways we’ve always imagined, but — in a twist too good to spoil here — also reveal some hidden depths and introspection. Dickie’s struggle to nurture his “nephew” Tony, which satiates his paternal urges until young Christopher is born, informs both men’s development and, in many ways, shapes the central conflict of The Sopranos decades later. Chase (with co-writer Lawrence Konner) hasn’t lost a step when it comes to father/son drama. 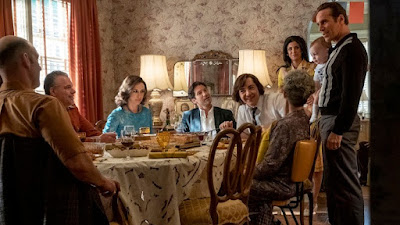 Despite the head fakes toward familiar Sopranos thematics and iconography, however, The Many Saints of Newark is otherwise a middling mob tale that never rises to the intricate heights of its source material. Dickie is meant to be a forerunner to Tony, an echo from Better Days whose own paralyzing narcissism leads to a similar, if not more tragic fall. But with only two hours in which to work, the movie simply cannot develop him as an engaging contrast to the mooks and goombahs who surround him. His affair with Guiseppina and power struggle with Johnny lack the texture we’re used to from Chase, and his best moments with Tony are spoiled in the movie’s trailer. Though Gandolfini honors his father’s legendary performance with grace and real insight, Tony is similarly short in the characterization department. Showing the character is not the same as developing him, and while the young Soprano is present for many of Dickie’s indiscretions, his final transformation lacks the dramatic weight Chase clearly intended.

Maybe that’s because The Many Saints of Newark is distracted by a Leslie Odom, Jr. subplot that is, in the end, entirely superfluous. Far too much time is spent on his Harold’s evolution from one of Moltisanti’s many runners to a rival boss and symbol of Newark’s African American uprising. To be clear, that story is fascinating and would be well served by a separate movie with the appropriate cinematic real estate to really flesh it out. Here, however, there just isn’t space. Both Harold and Dickie are required to cede too much screen time to each other’s stories, forcing a balance that robs both of desperately-needed nuance. Harold’s big third act move against Dickie doesn’t feel like a true betrayal because we’re never given a chance to care about their dynamic. The riots and their aftermath are backgrounded at every opportunity, and the casual racism bandied about by the DiMeo crew — maybe intended to be a commentary on the white flight and redlining injustices of the era (era) — fails to propel the story in any real way. 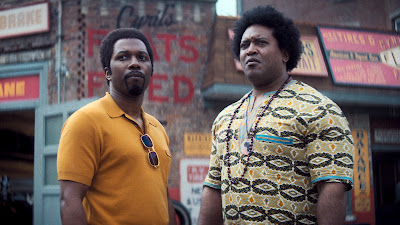 The frustrating truth is that The Many Saints of Newark is not a Sopranos story that needed to be told. There isn’t a moment in it that wouldn’t feel more resonant as one of the show’s many flashbacks, bits of color that grant us more insight into Tony or Christopher’s abhorrent behavior. Why didn’t David Chase return to his most celebrated project with a new series, even a limited one? Is HBO Max to blame, or was Chase simply not ready to dive as deeply as necessary to serve these characters? His storytelling is at its best when presented in layers, when his band of misfits have opportunities to try and fail and grow and regress. “Too much yakking, and not enough whacking,” the show’s detractors used to complain. Well, The Many Saints of Newark might finally scratch that violent, sociopathic itch so many mainstream viewers nursed for the show’s seven-year run. For those who came to The Sopranos for its powerful dissection of identity, family, and American culture, however, the yakking will be sorely missed.
Posted by Patrick Bromley at 5:00 AM

Email ThisBlogThis!Share to TwitterShare to FacebookShare to Pinterest
Labels: 2021 movies, david chase, gangster movies, mob movies, movies based on tv shows, the many saints of newark, the sopranos