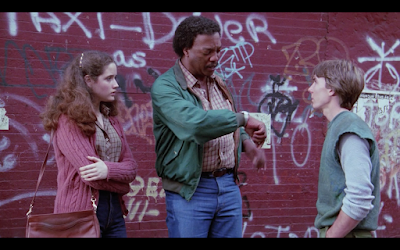 Permit me to continue quoting the Fresh Prince and DJ Jazzy Jeff. “You know parents are the same | No matter time nor place | They don't understand that us kids | Are going to make some mistakes | So to you, all the kids across the land...” You know how it goes. In the case of the made-for-tv movie Dreams Don't Die, as well as most TVMs of the '70s and '80s, all adults can be substituted for the “parents” about whom Will and Jeff are rapping. It's the age old battle: kids versus grownups. Both sides think the other doesn't “get it.” Both sides are correct. Heading toward what some claim to be *gulp* middle age, and with two boys of my own, I hate to see that I'm turning into what I swore I never would: a grown up; a nagging parent; a tired dad; old man yells at cloud. But, I'd also like to think I'm open-minded enough to continue to grow and learn and educate myself in the ways of the youngs. The olds are out. The youngs are in. But the war wages on. And in Dreams Don't Die, neither side comes out the victor. 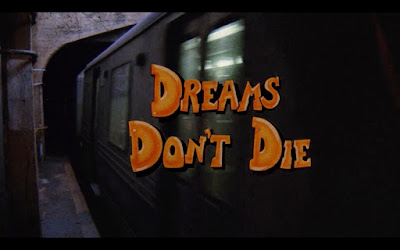 While there isn't a declared “winner” between kids and adults in Dreams Don't Die, screenwriter Garry Michael White (Scarecrow) and director Roger Young portray each side fairly. Ike Eisenmann (Escape to Witch Mountain) is Danny Baker, a talented artist whose medium is specifically graffiti. He lives with his mom and her abusive boyfriend and when he's not in public school, he's coming up with new designs in his bedroom and sneaking out at night to abandoned subway tunnels or train yards and spraying his masterpieces on the sides of the empty cars. Trini Alvarado (Little Women, The Frighteners) is Teresa, his friend who wants to escape the city and build a life of her own. She's been shuffled around the foster system all her life, though, and the only way to escape is to make a large sum of money. Enter Kirk (Israel Juarbe), a teenage drug kingpin whose clientele are the adults he despises. Kirk's team of dealers are all under the age of 16, that way, if they get pinched, they'll only get a slap on the wrist and, at most, be sent to juvenile detention for a short period. Noticing Teresa needs money, Kirk seduces her into dealing for him. Paul Winfield is police officer Charlie Banks whose beat is the neighborhood where Danny defaces property, Teresa deals, and Kirk rules. Banks catches Danny one night painting and, noticing the boy has real talent, becomes his mentor. Banks introduces Danny and Teresa to a world of art they'd never experienced with a trip to the Guggenheim. Naturally, tragedy ensues, a plot is devised to catch Kirk, and all ends merrily and well in that sad desperation only found in films about New York City during this time.

While the overall story, performances, score by Brad Fiedel, gorgeous NYC photography by cinematographer Tony Imi, and original paintings by graffiti artist Dondi, White's dialogue is what really drew my ear and kept my attention. The words he gave these kids – all under 20 – to say, and, along with their delivery of those words, had a Shakespearian lilt to them. Israel Juarbe as Kirk especially says his dialogue and a sort of iambic pentameter, giving his performance a beautiful theatrical quality. In seducing Teresa to come work for him, Kirk says, “Permit me to re-energize your dress,” commenting on her worn down clothes. The adults surrounding Kirk, from the police to lawyers to clients, fear him. They recognize the power this child has in the mean streets of 1980s New York. Everyone knows that with a nod Kirk can have any one of them shot and killed. So too do White and Young. Their recognition of the brains and guts a school of hard knocks-educated kid possesses is important in letting their audience know kids know things and we (parents, adults) should be paying attention. 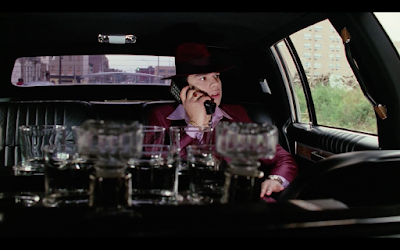 In the same way Kirk is treated with reverence (albeit tinged with fear), Danny and Teresa are rightly given the right to express their feelings. These kids are angry, scared, sad, and confused. The one adult who gives them the time of day is the beat cop to whom they paid no respect in the past. Officer Banks repeatedly says to Danny, “You're just a punk with a spray can.” Although at first Banks asserts his authority as cop and adult, giving no respect to these kids, Danny makes the first steps in their reciprocal education and admiration for one and another. “Graffiti is real art,” Danny retorts every time Banks sneers at his creations. While both are in the right (graffiti is beautiful art that shouldn't be used to illegally deface public or private property), the friendship that evolves between Banks and Danny is very moving. Specifically, the scene where Banks takes the kids to the Guggenheim, he tells them, very sweetly, “Take your time. Look around.” and leaves them there, knowing full well these two “punk kids” will take their time and look around. The camera focuses mostly on Danny's reactions as he's experiencing these masterpieces hanging in one of the most prestigious museums in the world, and Eisenmann wordlessly delivers an emotionally fraught performance that brought tears to my eyes. 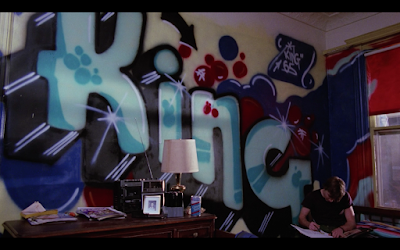