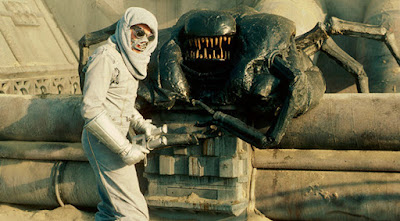 Full disclosure: my original plan was to watch and review Ingmar Bergman's Fanny and Alexander but, lo, my focus was not such this particular Sunday as to watch moving images, read subtitles, analyze film, and write notes simultaneously. But fear not, dear reader, for I will appease the clamoring masses and soon deliver my essay on Fanny and Alexander. Until then, though, indulge me as we travel to space for a rather enjoyable Alien ripoff featuring an Android wearing a Stormtrooper suit, a scientist that looks like the love child of Brent Spiner from Independence Day and Stanley Tucci, and enough implied semen to fill the USS Enterprise. 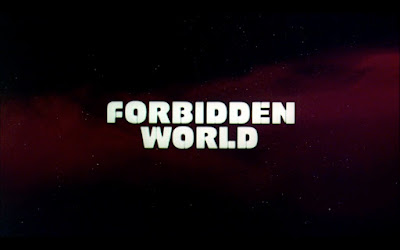 From Roger Corman's New World Pictures, director Allan Holzman, and co-writer Jim Wynorski comes this straight rip from Alien starring Jesse Vint as a “troubleshooter” who arrives at planet Xarbia to assist a team of scientists already in crisis mode after their experiment known as Subject 20 has become a killing machine. Within two minutes of the opening credits the android SAM-104 wakes her master, Mike Colby (Vint), from hypersleep and they immediately start blowing up opposing ships. Like many of the movies I write about for this column, I went into Forbidden World knowing next to nothing, and I literally just finished re-watching the brilliant Southern-fried exploitation thriller Macon County Line starring Vint and his brother Alan, so I was pleasantly surprised to see a familiar face show up on screen. As soon as Colby and SAM defeat their attackers they get a mayday call to help the team on Xarbia. Colby and SAM are greeted by the commanding officer and a buxom blonde in a low-cut jumpsuit named Dr. Glaser (June Chadwick) who, almost immediately upon meeting Colby, drops the line, “I heard you're the best troubleshooter in the federation. Want to see some trouble?” Having already seen Corman's name in the opening credits, I knew breasts were in my future. The CO then says something along the lines of, “It's just us, so the ladies are always happy to see a new face.” “The ladies” being Dr. Glaser and Tracy (Dawn Dunlap) who are constantly looking at Colby like a piece of meat, which Colby doesn't mind.

After all the initial horniness, Colby is introduced to Dr. Timbergen (Fox Harris) who explains that their work has involved finding a new source of food before the universe's (???) supply runs out. In doing so they've created different living beings, but this time their latest creation has escaped and started killing the lab animals. When the latest creation, Subject 20, outgrows its current exoskeleton, it cocoons itself in the shape of a spider that is one of the grossest things I've ever seen. I'm not a spider guy at all and when this thing breaks out of its cocoon for the first time I jumped so hard my chair nearly tipped over. While the screenplay and most of the performances leave something to be desired, the special makeup effects team led by legendary artists John Carl Buechler and Mark Shostrom are some of the best. Upon one of Subject 20's transformations, it turns into something that resembles a deflated Venom complete with long tongue and sharp teeth, while another transformation gives Subject 20 tentacles with which it impales its victim lengthwise beginning at an orifice south of the equator. It's painfully obvious at least 75% of this film's budget was wrapped up in the special effects department, and that's not a complaint. 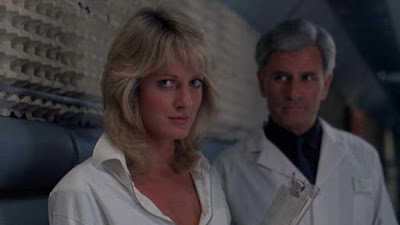 Quick notes on Forbidden World:
• Dr. Timbergen has a chronic cough but never cover's his mouth.
• Referring to Subject 20, the line, “Let's go bag ourselves a dingwhopper” is said in earnest.
• A major surgical procedure on a human is performed with a standard box cutter

What struck me most about Forbidden World, particularly the base on Xarbia, is the fact that this place has a sauna. And, being a Corman picture, there are several scenes that take place in said sauna wherein the two women are on full display in all their natural glory. At one point Subject 20 is watching Dr. Glaser undress before it drips unidentified goo onto the glass, obscuring our view. After Colby has sex with Glaser, he immediately goes to the sauna where Baxter is and proceeds to seduce her. Again, Subject 20's unidentified goo drips from the ceiling in a not-so-subtle symbolic act. And in the final use of the sauna set, Baxter and Glaser undress each other in the steam room, ionizing and oiling up in order to lure Subject 20 to its demise. 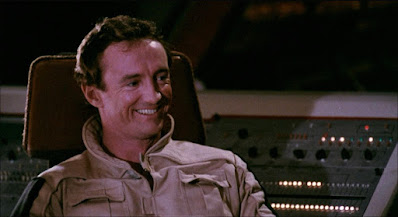 There's no doubt about it: Forbidden World could be considered a bad movie. The editing is enraging. Lightning fast cut after lightning fast cut mixed with a revolting amount of flashing imagery forced an audible frustrated sigh from this viewer on several occasions. But – and this is a big but – all of that is forgiven simply for the fact Buechler's makeup effects are out of this world (pun intended). And, you know, naked people.
Posted by Patrick Bromley at 5:00 AM