Reviews: C'MON, C'MON & THE POWER OF THE DOG 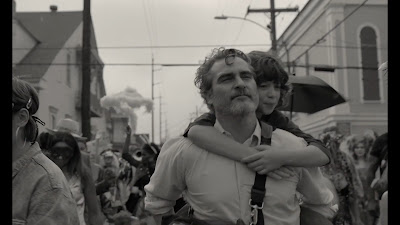 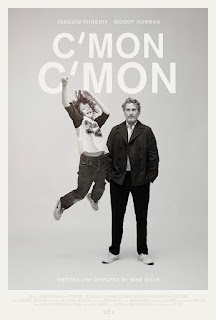 And it’s not to say that C’mon C’mon doesn’t deal with difficult topics or feature inspiring performances. Eleven-year-old Woody Norman deserves all the praise he’ll receive this season, giving one of the only kid performances in recent memory that doesn’t feel as though it was written by a forty-year-old. Anyone who has ever actually raised a child will understand Viv’s struggle to reconcile the love she feels for her son and her frustration with his burgeoning behavioral disorders — the spikes in mood and energy that make him impossible to predict. As Jesse develops a new and frightening kind of emotional reactivity, Johnny must open up to his adolescent nephew in ways he’s always skirted in his adult relationships. Complicating matters more is Jesse’s father (Scoot McNairy as Paul), whose crippling mental illness consumes Viv’s attention and tests the limits of her own empathy. C’mon C’mon uses Johnny’s various interviews as a framing device, reinforcing the theme that listening — really listening — is the key to true understanding.

But C’mon C’mon dooms itself in its initial premise, as Johnny is by far the least interesting character of the bunch. By centering the narrative around his journey, Mills has taken the path most traveled, the most unimaginative and navel-gazing approach possible. Perhaps it’s age — as our own J.B. is wont to say, I am finding myself wandering helplessly into my dotage — but watching mediocre adult men demonstrate minimum emotional efficacy just doesn’t hit the same as it did in my youth. Johnny never earns our sympathy, not through stories of lost love or flashbacks to his clashes with Viv over the care of their late mother. Instead, we’re asked to watch, enraptured, as he complains to Viv that sugar made Jesse hyper or that the small child said something that hurt his feelings. “Grow up!” we shout into the pretentious, black-and-white void. “The adults are trying to work!” Still, C’mon, C’mon is sure to inspire those who need a little late-life push, and my own revulsion at its simplistic execution shouldn't drive away those in need of a dose of humanistic sweetness.

The Power of the Dog (Dir. Jane Campion) 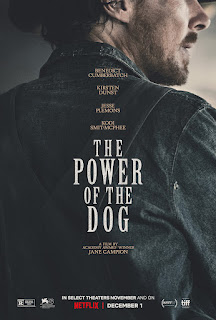 Faring better this season is Jane Campion, who returns after more than a decade out of the director’s chair with The Power of the Dog, a western pastoral based on the 1967 novel by Thomas Savage. Benedict Cumberbatch stars as Phil Burbank, a prickly but prosperous Montana rancher whose irascible attitude alienates his brother (Jesse Plemons as George Burbank) and poisons George’s new marriage to Rose Gordon (Kirsten Dunst), the owner of a local inn. As we get to know Phil, we sense he’s a bit jealous of George’s more refined demeanor, dismissing his societal niceties and sternly insisting to his ranch hands that Men Should Be Men in the mold of his departed mentor (and Film Twitter’s latest meme-du-jour), Bronco Henry. He’s clearly masking some insecurities, never more so than when he’s abusing Rose’s mild-mannered son, Peter (Kodi Smit-McPhee). The closer George and Rose grow, the more volatile Phil becomes, and as his torture drives Rose into alcoholism, Phil sees an opportunity to destroy the new family for good.

As Campion guides us through the film’s chapters, each more tense and unnerving than the last, we see newer and more interesting layers from Benedict Cumberbatch, an actor many of us first got to know as BBC’s Sherlock. His cold and enigmatic demeanor suited that role perfectly — he even imbues Conan Doyle’s immortal sleuth with a bit of longing sensuality — but Cumberbatch has since lumbered from one historical drama to the next, alternating between stuffy Brits and Mystic Arts masters. But The Power of the Dog finally feels like his moment: Phil’s bitterness, his profound unwillingness to confront the demons that are eating him alive, gives Cumberbatch ample room to play. As George and Peter look on in horror, Phil thoroughly and ruthlessly dismantles any and all hopes Rose may have had for a happy life. One especially painful scene finds Rose struggling behind the piano while Phil mockingly mirrors her — with considerably more precision — on the banjo. It’s a needling, painful act, one made all the more cutting by Cumberbatch’s reptilian sneer. 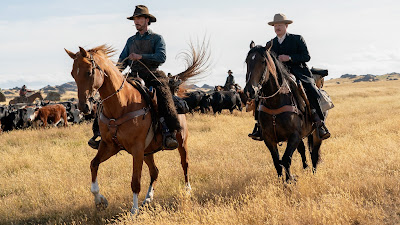 It’s this contrast between stunning mountain vistas and tiny, almost imperceptible shifts in its characters’ facial expressions that makes The Power of the Dog one of the only Prestige Pictures innovative enough to merit serious awards consideration this season. Dunst and Plemons are spectacular in their supporting roles, trading the genre’s typical histrionic outbursts for a kind of porcelain stillness that feels liable to shatter at any moment. George and Rose will never be able to love each other as long as Phil is around, a grim reality that the underestimated Peter uses as a call to arms. The younger man hatches a scheme that is sure to sneak up on viewers expecting high noon shootouts or any of the other cowboy cliches that Phil so reverently worships. So many literary adaptations fail to properly translate the internal nature of prose to the bright, expressive palette of cinema, but writer/director Campion and cinematographer Ari Wegner know just how to weaponize it without any dilution and allow Savage’s subtext to stay subtext. It’s a true feat, one that should separate The Power of the Dog from, forgive the pun, the pack.
Posted by Patrick Bromley at 12:00 PM