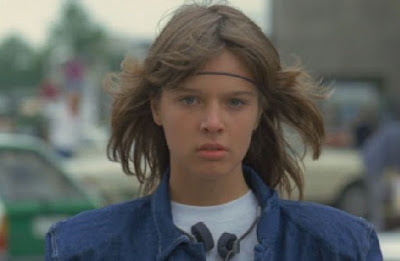 A lesson for all you sub-par New Wave bands. 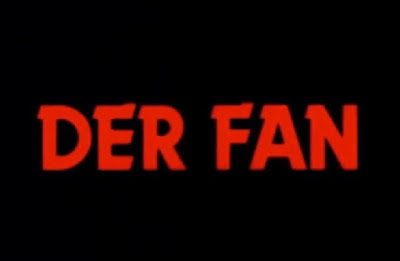 Watch this movie. Der Fan was first recommended to me last year when Jonathan Hertzberg suggested it as a double feature pairing with Jerzy Skolimowski's Deep End (another film you must see). Luckily, and expertly, Jonathan described it as a tale of obsession with a startling ending, and that's it. That, dear reader, is going to be my goal for selling you on this movie. A while later I was listening to a podcast that reviewed the film, and I stupidly kept on listening. “It couldn't be that shocking,” I told myself. “It won't ruin it.” And it didn't ruin it, per se, but I wish that when I sat down to finally watch Der Fan I knew as little as possible (as is usually the case when I watch movies).

Der Fan, at its core, is a very simple, very touching, coming-of-age story about a teenage girl named Simone who has an unhealthy crush on Germany's biggest pop star. Extended periods of no dialogue; drawn-out, gazing shots of Simone longing for a chance to meet the object of her desire; a somber synth pop score from German New Wave band Rheingold. Along with heart-shattering performances from our two leads, these things add up to one of the most memorable films I've seen in a very long time. The longer it sits with me, the deeper it burrows into my brain, preparing a permanent residence for itself. The photography alone by cinematographer Bernd Heinl is mesmerizing enough to hold your attention. This is all before things head so far off the rails at the ending we're in a completely different movie. And in no way is that a detriment to the movie we'd been watching. It's the work of a mad scientist and we're privileged enough to be sitting in his lab, watching everything unfold. 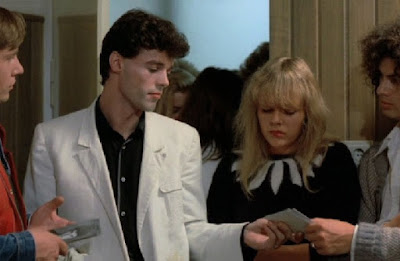 The pop star over whom our lovelorn Simone obsesses is called R (Bodo Staiger in his only film role). I suppose he could be the love child of Robert Smith, Connor Oberst, and Timothee Chalamet if for no other reason than his moping around the oyster that is his world like he himself is a 16-year old girl. And, to be honest, that's exactly what his music sounds like, too. But, as if time has stood still my entire life, that's what teenage girls like, and Simone (Desiree Nosbusch) is no exception. She is an exception, though, in the fact that she will go to any length to claim what she feels is rightfully hers. Like many teenagers, her walls are plastered with pictures of her love, including a life size cutout portrait of R with which she practices her French kissing. Unlike many teenagers, though, Simone runs away from her home to the big city of Munich where, without a clear plan, shows up at the studio where R is performing for a TV program. As luck would have it, and with a little help from the demons of predatory celebrities, Simone catches R's eye and is invited into the studio. As Simone's dreams are finally coming true and she thinks the fairytale is just beginning, we, the jaded viewer, know R is just adding one more notch above his bedpost. Simone, like all of R's conquests, is an easy target, and monster that he is, will take her, use her, and leave her on the curb with the morning trash.

After R's TV performance where he dons a bald cap and hides behind unclothed mannequins while “sprechesanging” to awful and repetitive synth pop for dozens of screaming girls in the audience, he makes a show of it for Simone in his dressing room by telling his manager he's not doing any more appearances because he needs a break and wants to spend time with the prey he just captured an hour before. They jet off to another building where, in any other circumstance, a very sensual and sexy scene unfolds. Two consenting people, slowly undressing each other, fingers caressing the curves of their bodies, billowing drapery enveloping their love-making. Except he's an adult, she's a child, the drapery colors represent the Nazi flag, and the music tells us what we're watching is not, in fact, sensual and sexy, but horrible and possibly illegal. This is the brilliance of Eckhart Schmidt. When the act is over, R literally pulls away from Simone, and reality peaks its head around the corner for her in a fleeting moment. Before disappearing once again into her grand delusion, she realizes she has just been used. This beautiful man, for whom she had developed a diseased love, after the greatest moment of her life was putting on his clothes in order to drag her out with the morning trash. Simone doesn't let that happen. And that's where I stop. 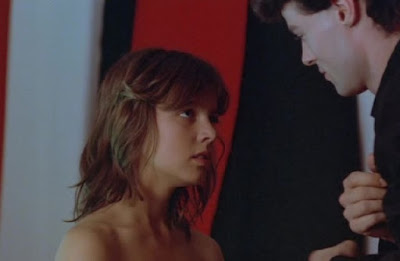 There aren't many movies where my eyes open wide and the words “Holy. Fucking. Shit.” come out of my mouth. Der Fan, even though I knew what was coming, delivered me that brilliant moment. And it happened over and over in the last 15 minutes of the film. This movie isn't supposed to work, but by god does it ever.
Posted by Patrick Bromley at 5:00 AM