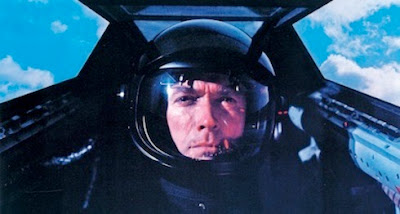 When I first set out to do this series there were a handful of movies I knew I had to write about because I either loved them and wanted to bring more attention to them, or the poster and plot synopsis made them sound amazing. For the most part, every discovery I've watched for 52/82 has been good to great, with only a few forgetful movies and one bad movie. Clint Eastwood's Firefox was one of the movies I was completely sold by the poster and synopsis. From IMdB: “A pilot is sent into the Soviet Union on a mission to steal a prototype jet fighter that can be partially controlled by a neuralink.” Sounds amazing, right? What it doesn't say is that most of the movie takes place in a supersecret boardroom full of men making decisions related to the Cold War. There are two movies I can think of off the top of my head that make governmental boardroom scenes entertaining: Kubrick's Dr. Strangelove and Tony Scott's Spy Game. Both of these films make their boardroom scenes interesting due to unforgettable performances and flawless direction. The boardroom scenes in Firefox are lacking in both areas.

The film opens with a rarely-bearded Clint Eastwood as Mitchell Gant jogging through a lush and damp landscape reminiscent of a real 1982 banger, First Blood. All of a sudden a military helicopter appears to be chasing him; Gant recognizes this and picks up the pace.  He ducks inside a cabin and begins a serious bout with PTSD a la John Rambo, complete with Vietnam flashbacks. It turns out it's just a colleague of Gant's who couldn't reach him on the telephone and decided to pop in using a Huey. The friend explains the plot of the movie, and being a former all-star pilot, Gant needs to sneak into Russia undercover, steal the jet, and bring it back to the the States. Here's my question: do we really think sending a clearly unstable man dealing with severe PTSD into enemy territory as a spy, and then stealing a jet armed with weapons technology controlled by the brain is the best idea? The answer is yes. And also don't ask stupid questions like that anymore because it will ruin the movie for you.

The coincidental timing of watching this movie also stood out. After everything happening in 2022, will we see the rise of anti-Russia movies again? It seemed like these were all the rage in the '80s. After demonizing Germany got played out, Russia took over as the big bad in American action movies. My vote is: I certainly hope not, because why disparage internationals when we have enough bad guys in our own country to depict? While I still love the big international war/crime movies of the '80s, I realize it's time to move on.

After Gant is enlisted, we enter the boardroom for the first time where dozens of men (and only men) explain his mission, explain the jet in detail, explain the consequences if this mission fails, and explain every other who, what, and where he needs to know. They shave the glorious beard and then paste a fake mustache on Gant and send him on his way. We all know the confused and angry old man look Clint is now famous for due especially to GIFs from Gran Torino, and I'm happy to report Firefox is full of those looks from Mr. Eastwood. He's portraying a sick man who is the least likely candidate for this mission with information flying at him a mile a minute. Had I muted the volume, I would have thought this was a comedy with the way Clint's brow is perpetually furrowed, his eyes constantly darting back and forth in an attempt to process what is happening at any given moment. Gant is then sent off to Russia. The entire second act are cuts back and forth between scenes in the boardroom and KGB members saying to Gant, “Papers please.” At this point we've met 7,000 people in America we're supposed to remember, and now we're in Russia where we meet 7,000 more. Gant meets his contacts, we get more boardroom scenes but this time in Russia, and FINALLY we get to the reason we pushed play in the first place: the jet.

At one hour and 15 minutes into the movie, Gant walks into the hangar and commences the steal-the-plane-plan. The jet looks like a medium-sized SR-71 with room for a single pilot, and is driven out of the hangar with little to no consequence, including no flaming deaths when Gant fires up the boosters inside. Gant gets to the runway and takes off to music straight out of Stripes, a moment that literally made me guffaw. The rest of the movie is Gant trying to get to Antarctica to refuel before making the rest of the trip home where government officials can now use the Russian technology “for good.” There is one brief dogfight, but the jet (codename: Mother One), is so fast no other jet – or their missiles! – can keep up. 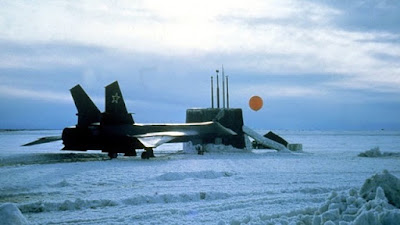 Firefox is one of the most deceiving movies I've ever watched. I didn't hate it, but there wasn't much to enjoy -- that is, unless you like listening to men sit around a big table and explain international affairs and wartime decorum. The whole point of the movie is to see this cool jet with mind-controlled missiles in action. Even Clint has the line (which he says half a dozen times), “Let's see what this baby can do.” Yes! Let's! But no. We don't get to see what this baby can do.
Posted by Patrick Bromley at 5:00 AM